Bonzai Pipelines are coming to Hurricane Harbor next year and we are definitely excited! Everything you need to know about the new slides can be found right here!

Ever since the SFNE Online Blog launched almost exactly a year ago, we have been saying that we would like to see Six Flags New England add something to the water park. While Mr. Six”s Splash Island was added to Hurricane Harbor in 2010, there hasn”t been a slide added since Typhoon in 2005. It’s nice to see the water park getting some attention. Bonzai Pipelines isn’t the only new thing coming to Hurricane Harbor next year either. They are actually expanding the boundaries. More on that later.

With Bonzai Pipelines, six people will load simultaneously into the launching capsule. Then the lifeguard will push a button and all six riders will drop at once – into their twisting, looping slide path. As you can see in the above rendering, immediately after the free fall you are thrown into translucent tubing. Then it transforms into tubing which will make the rest of the slide experience pitch black. Here is a quick video to show off what the slide is going to be like. You really get a sense of how the drop capsules function.

Now at this point, you are probably wondering to yourself, “Where is Six Flags going to put this?” Well, it’s not in the Thomas Town spot like we previously thought. The location is actually in a really smart place. Let”s take a look at the site plans: 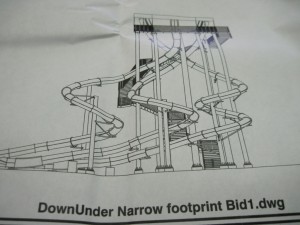 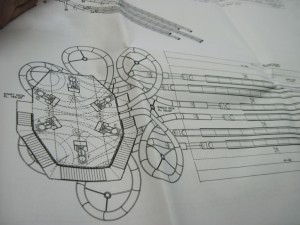 The two pictures above give us another look at the slide complex’s layout. Pretty twisted and crazy if I have to say so myself. I know I’m looking forward to trying out all six of them. Anyways, back to the site plans. The picture below is a general site overview. Now you can finally get a good sense of where the park is going to install the slides. Like I said above, the location they went with is smart. When you see the rest of the site plans, you’ll understand why!

This next picture is a closer view of the plans. Still, you might be wondering to yourself, “Why here?” Just hold on and hear us out on this one. You can also see a few surprises in the below picture. I apologize for the blurriness, but you should be able to make everything out. The first surprise being something we told you about a month or so ago. The Thomas Town pop-jet fountain (added in 2009) is being relocated. That is what’s labeled “Splash Deck Activity” in the plans. You’ll also see two spectator shading areas and a new lounging section. 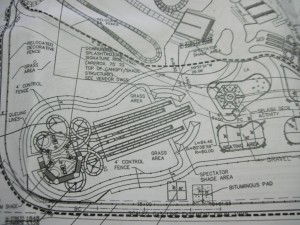 The park didn’t stop at one lounging section. Try five new lounging areas! As you’ll see in the picture below there are several new spots for lounge chairs. In addition to those areas, a new path will be installed, connecting the Tiki Bar’s area to this new area. There will also be a new food stand as well – something this section of Hurricane Harbor desperately needed. 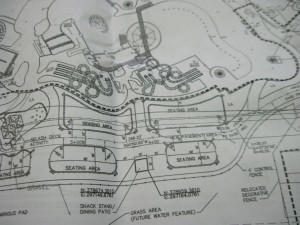 As you can see in the aforementioned picture, there is a huge section labeled “Grassy Area (Future Water Feature.)” SFNE is taking the opportunity of adding Bonzai Pipelines to prep the whole south side of the water park for another expansion in the future. That whole gravel area between the entry road to the employee lot and Hurricane Harbor will be gone next season. In the future, hopefully more slides will be there. This is why adding Bonzai Pipelines to the spot they are putting it in is really smart. Much smarter than replacing Thomas Town with a water park expansion.

Thoughts for the future:

There is a lack of a racing water slide in the New England area. Sure Lake Compounce added one but that’s it. Although some may argue that Bonzai Pipelines is a racing water slide, it isn’t a true “mat racer.” Hurricane Harbor also still needs a bowl slide. Who knows what the future might hold in store for the water park. We’re coming up on some exciting times as the water slide manufacturers are really starting to innovate with new designs, like we mentioned earlier with Bonzai Pipelines being a world’s first.

What do you think of the new Bonzai Pipelines water slide?