Another Riverside Park attraction (potentially) bites the dust. We are hearing that Six Flags New England may be planning to remove New England Skyway from the park.

This rumor is true! Get your final rides in before New England Skyway closes forever on November 2. Click here to find out about the all new Wicked Cyclone – coming to Six Flags New England in 2015!

First thing I want to mention before I even get into talking about the rumor is the fact that this is a rumor. Take everything I’m writing about with a grain of salt. I could be typing this for absolutely no reason…. Now to the rumor. About a week and a half ago this rumor popped up, seemingly out of nowhere. Multiple people have told told us that they’ve heard this rumor. And to be honest, it makes sense. I’ll get into my reasoning in a bit. 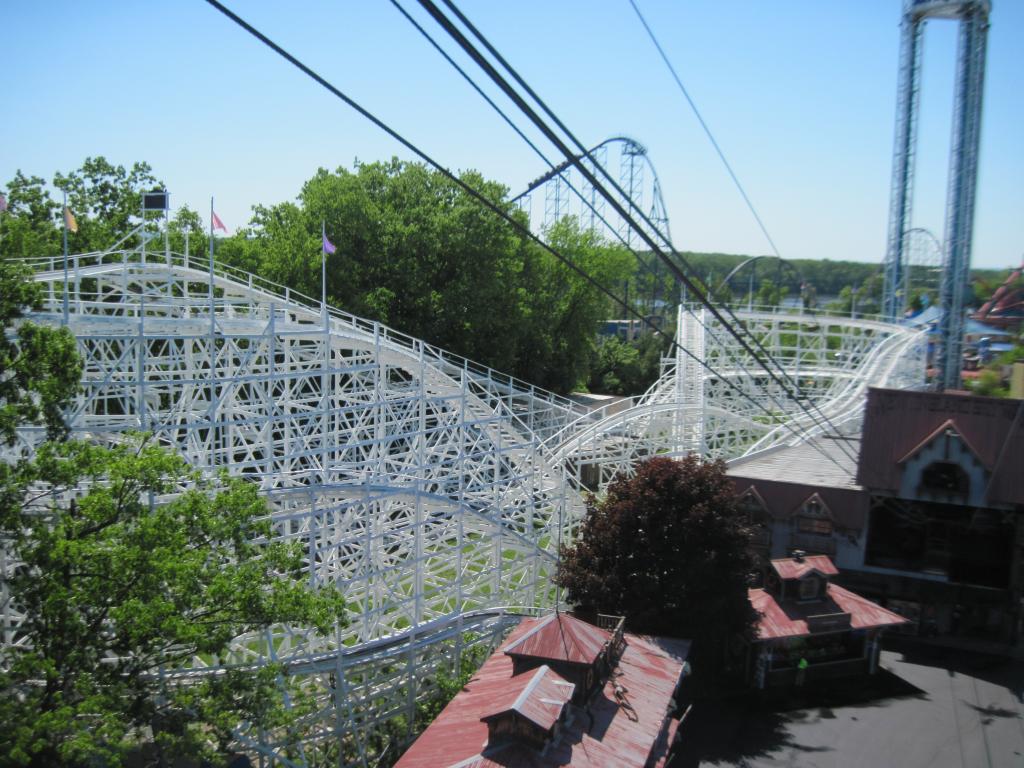 Here’s a little history about Six Flags New England’s last remaining transportation ride. It opened at Riverside Park in 1973. It was originally located in Coney Island. That’s actually the reason why it has those weird looking gondolas. When running in Coney Island it had a UFO theme. There were flashing lights on the tops and the gondolas were actually enclosed in glass. Thankfully, Riverside decided not to include those glass enclosures when they reinstalled it in Agawam. Here is a plaque talking about the history: 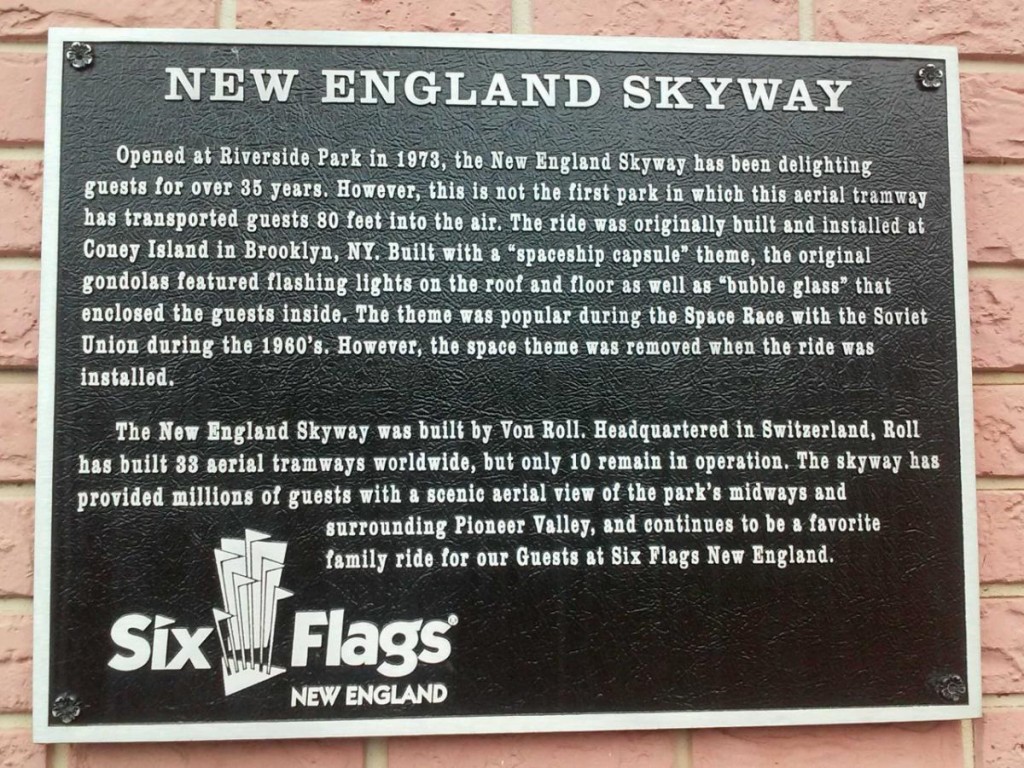 New England Skyway is the one of the last remaining Von Roll aerial tramways in the world. Let’s hope the rumor isn’t true because it sucks seeing defunct manufacturer’s rides going extinct. Even though the ride has a pretty short layout, it’s still nice to have in the park. There’s a station on Main Street and one at the far side of the North End. New England Skyway is a nice, relaxing ride that’s also great for families. Sadly, Six Flags New England is already severely lacking in family rides. 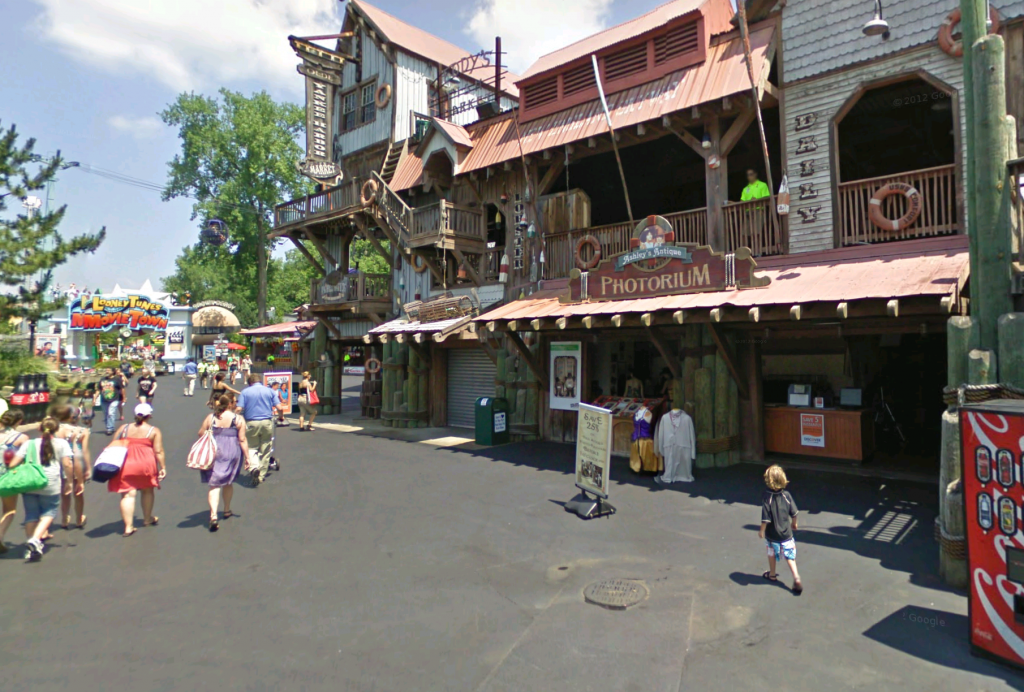 Here is the station on Main Street, which is up a couple flights of stairs. The facade it’s enclosed in looks really cool too. Hopefully, if the rumor proves to be true, they keep it intact. This picture is a screenshot I took from Google Street View.

Below are some shots of the “UFO” capsules. 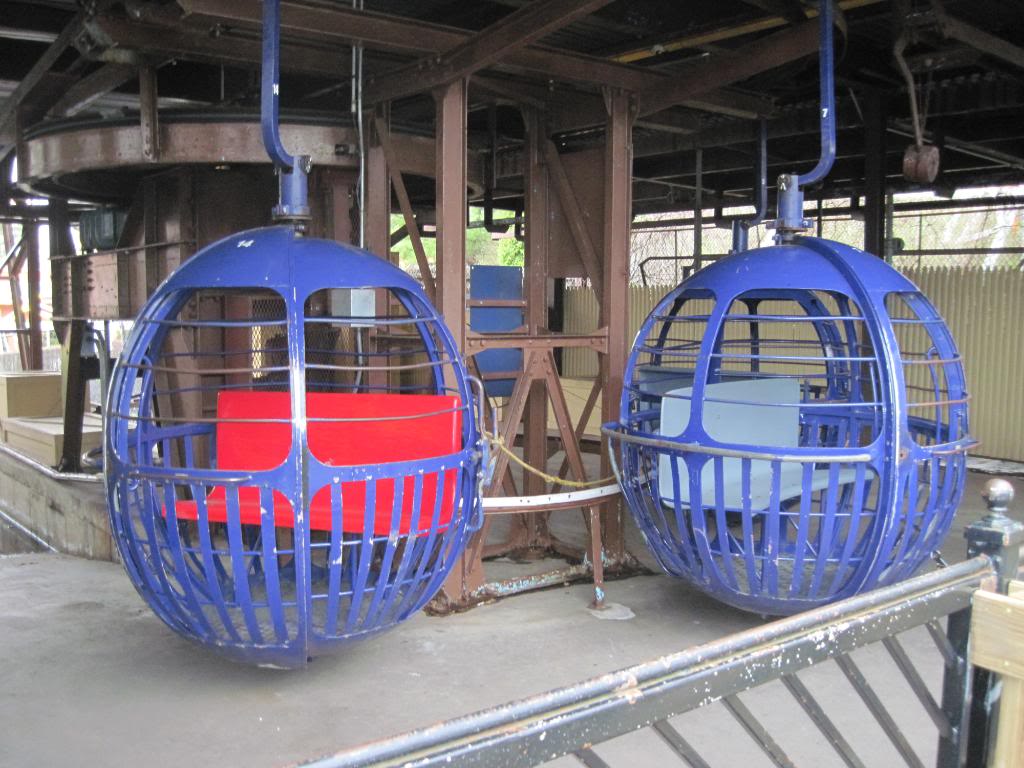 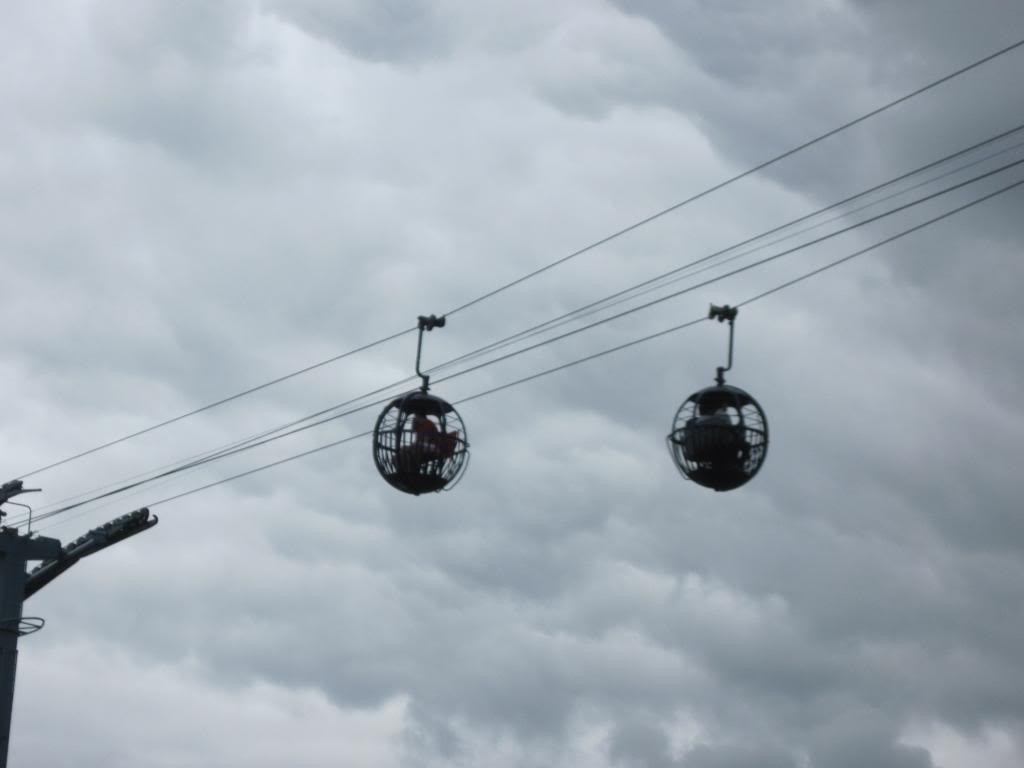 Here’s the station in the North End. Sort of plain but it gets the job done. Again, this is a screenshot from Google Street View. 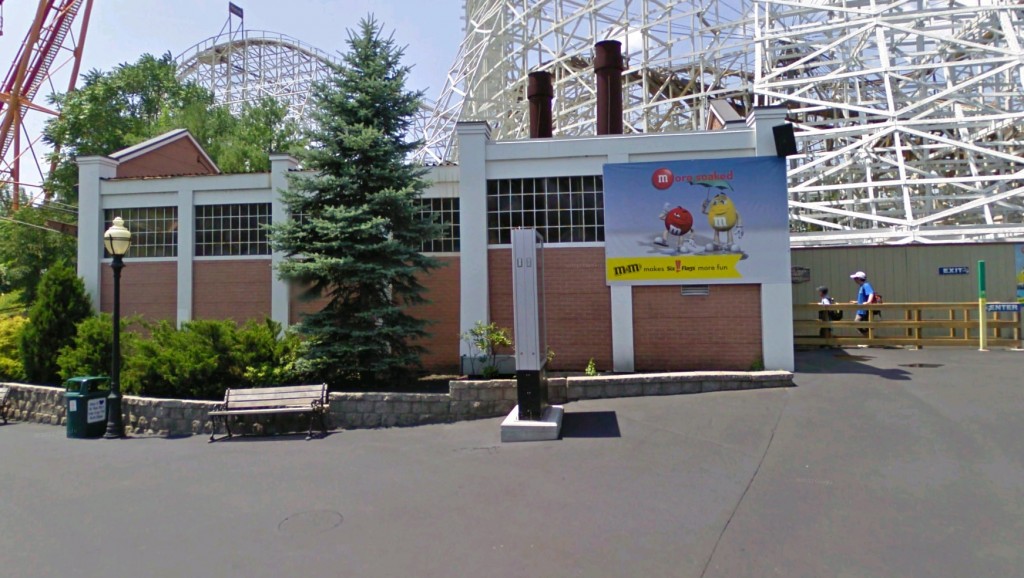 Another thing to mention is how the line is always long. If you go on a crowded day, you’re guaranteed to see huge lines at both stations. 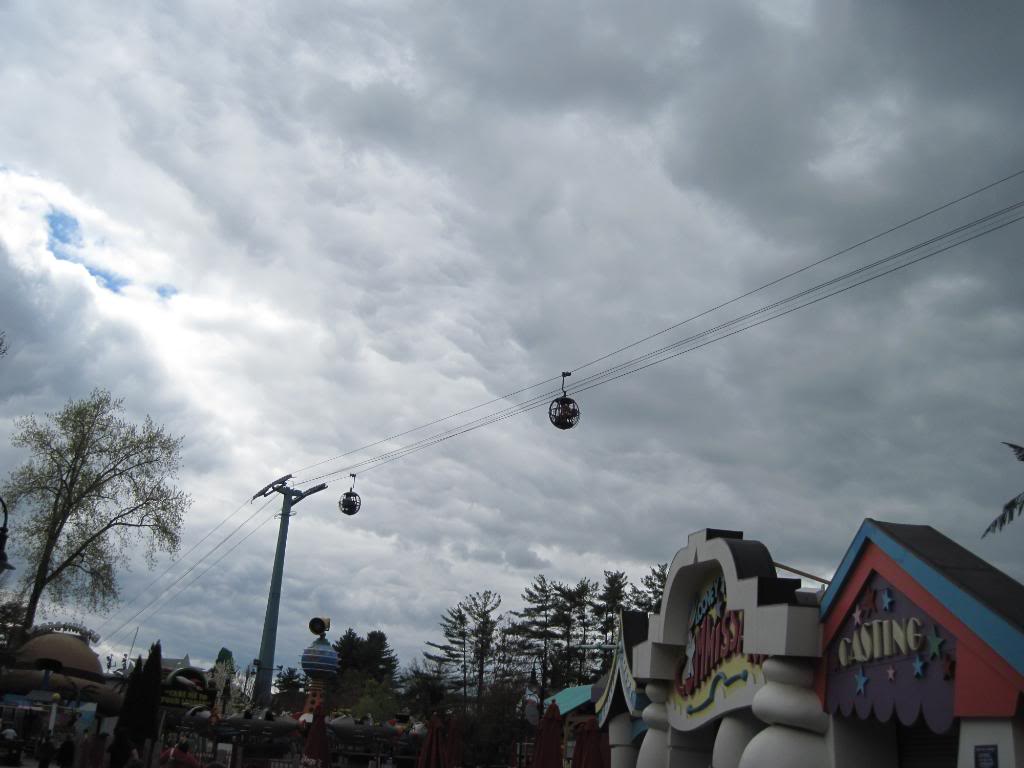 Playing devil’s advocate here now… Why do I think it sort of makes sense for them to remove New England Skyway? 1) Maintenance. We’ve been hearing that the cost to keep the ride operating continues to increase year after year – just like Catapult, Twister, Double Trouble, Nightwing, Time Warp, Colossus, etc.

2) If the rumor we posted about back in May comes to fruition, it’s probably going to need a new entrance. Back when Cyclone first opened, the queue for the ride was just to the left of the North End station for New England Skyway. With the way the land clearing has been going, it seems like they will be using the old Cyclone queue for whatever replaces the wooden coaster. With the amount of people SFNE has been attracting lately, they will definitely need a lot more room than the park needed when Cyclone opened. They can kill two birds with one stone – remove New England Skyway and use the station as an entrance/first switchback for whatever replaces Cyclone.

It stinks to think this way but the truth of the matter is amusement parks (Six Flags parks specifically) don’t like dumping money into aging attractions. Would everyone like to see them salvage this attraction? Of course! And even though it’s a great family ride, they’ll probably remove it anyways.

I’m also not a fan of the park removing two attractions and then replacing the two with just one. First it was Catapult and Taz’s Dare Devil Dive for New England SkyScreamer. This year it’s Cyclone and New England Skyway for whatever replaces Cyclone. To be honest, I’m probably more upset about the idea of this leaving than Cyclone closing… With that, I’ll end this post with this picture. It couldn’t be more fitting. Haha. 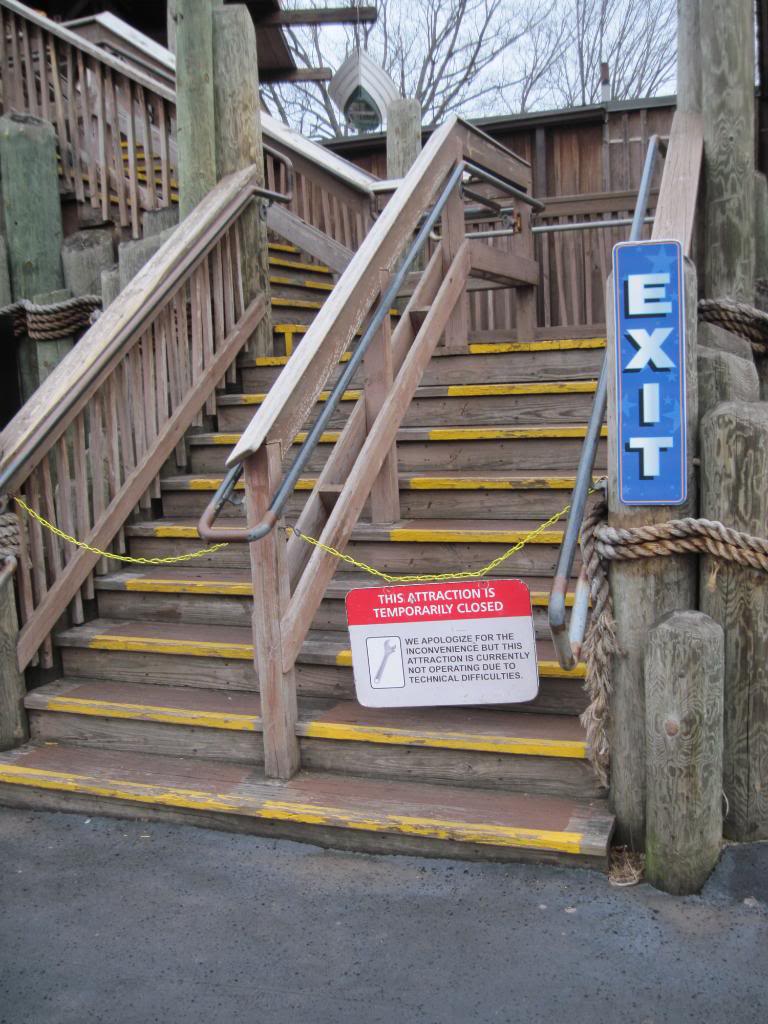 Try to make it to the park soon. We’re hearing it might close down as quickly as the last weekend in August!