We’re just a few days away from knowing what exactly is happening to Cyclone at Six Flags New England. Here is Cyclone construction update #5! 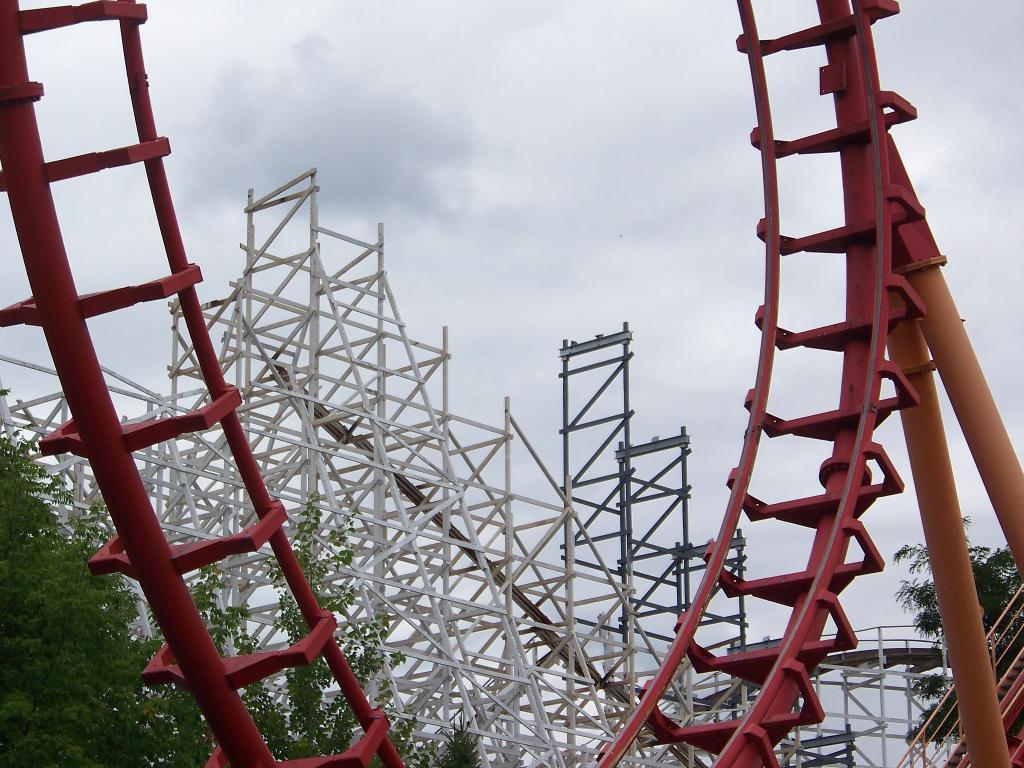 It seems like I’m repeating myself every update when I say, “A ton of work has been done this week.” But it’s true! This week Six Flags New England and the Rocky Mountain Construction crews have begun adding new supports to the lift hill.

But first, let’s look at some of the work that has been done with the steel cross beams. They’ve added the pieces that connect the track to the beams. Here is a look at them on the lift hill. Also notice that the since the beams are positioned to the right, the catwalk will likely go on the left side of the lift hill: 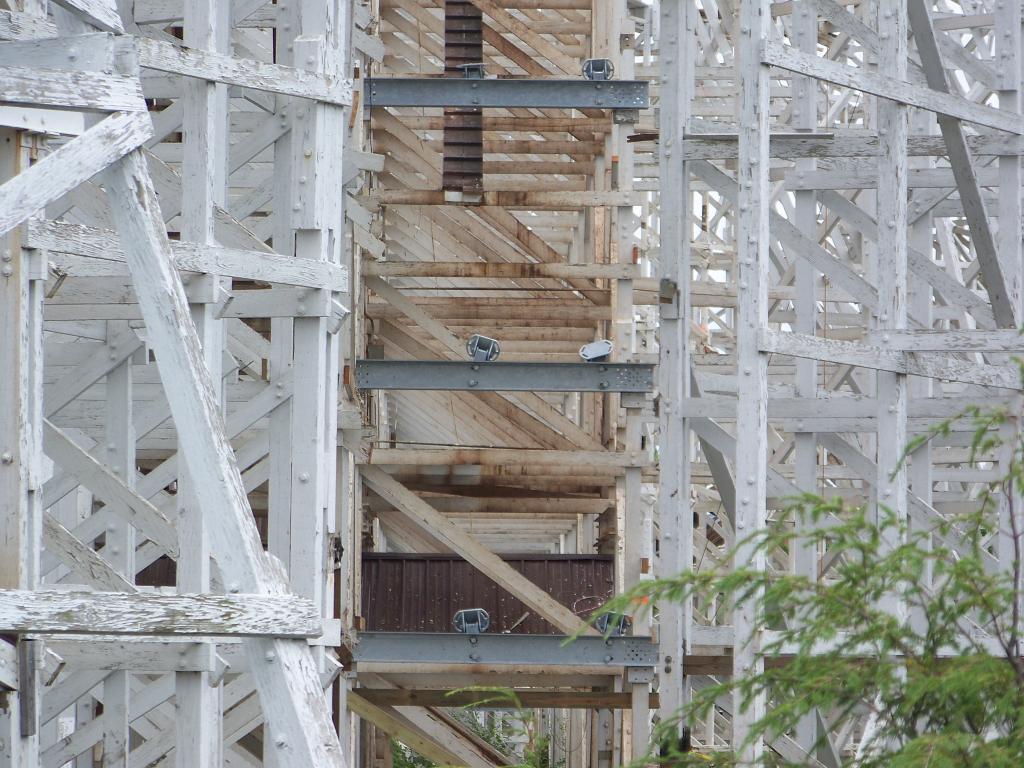 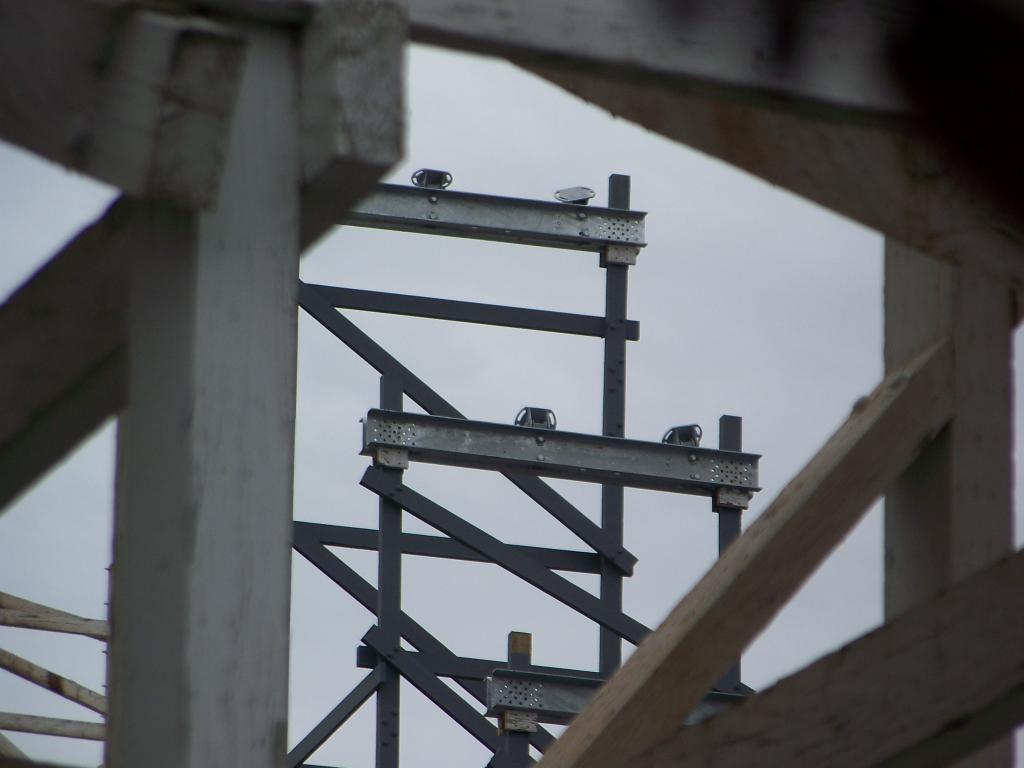 The connectors have also been added to the turn coming out of the station. 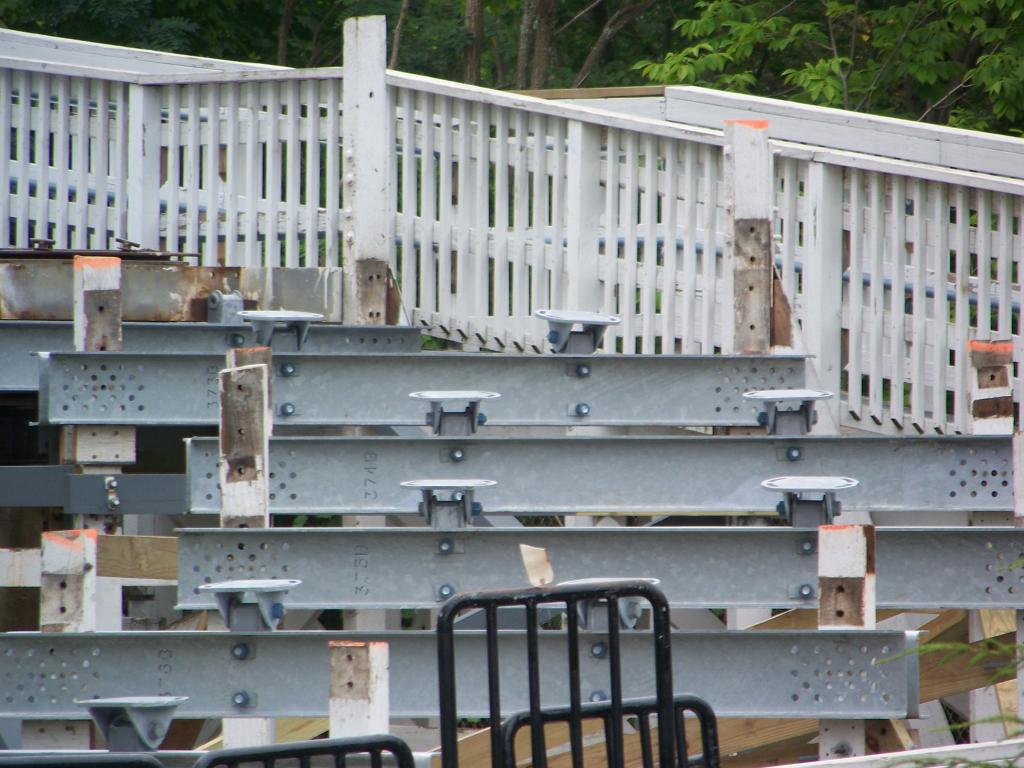 Some additional deliveries have been made to the park this week. These next two pictures were taken in the overflow parking lot. It looks like this is where they are keeping the stacks of wood and all the steel parts. 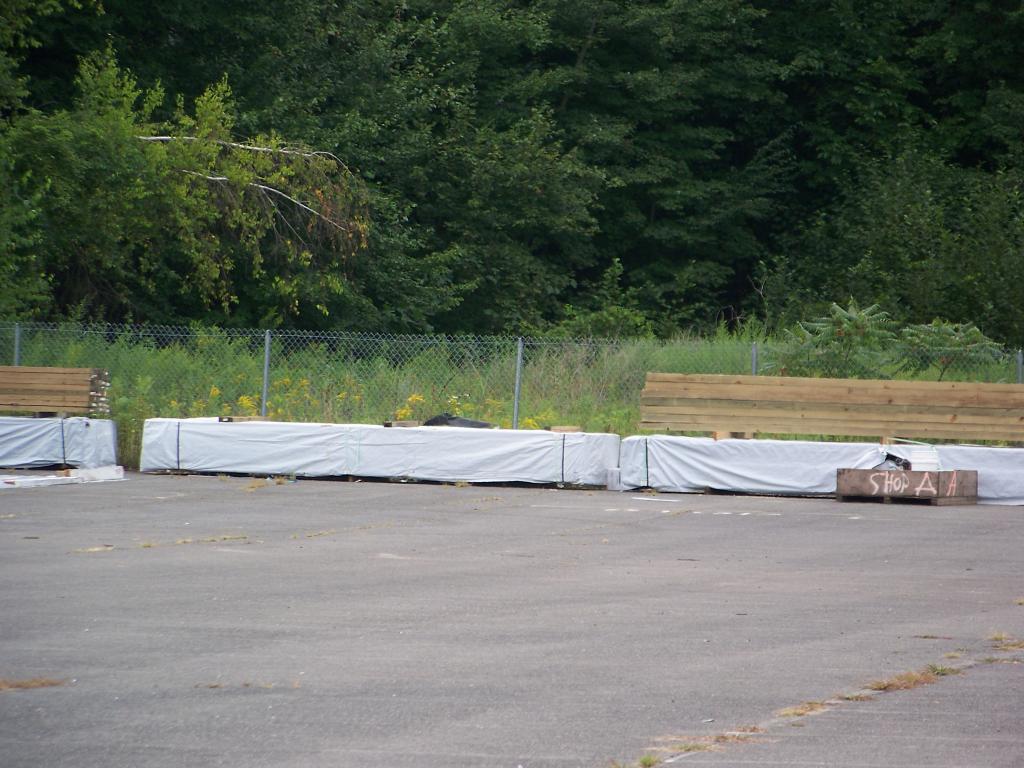 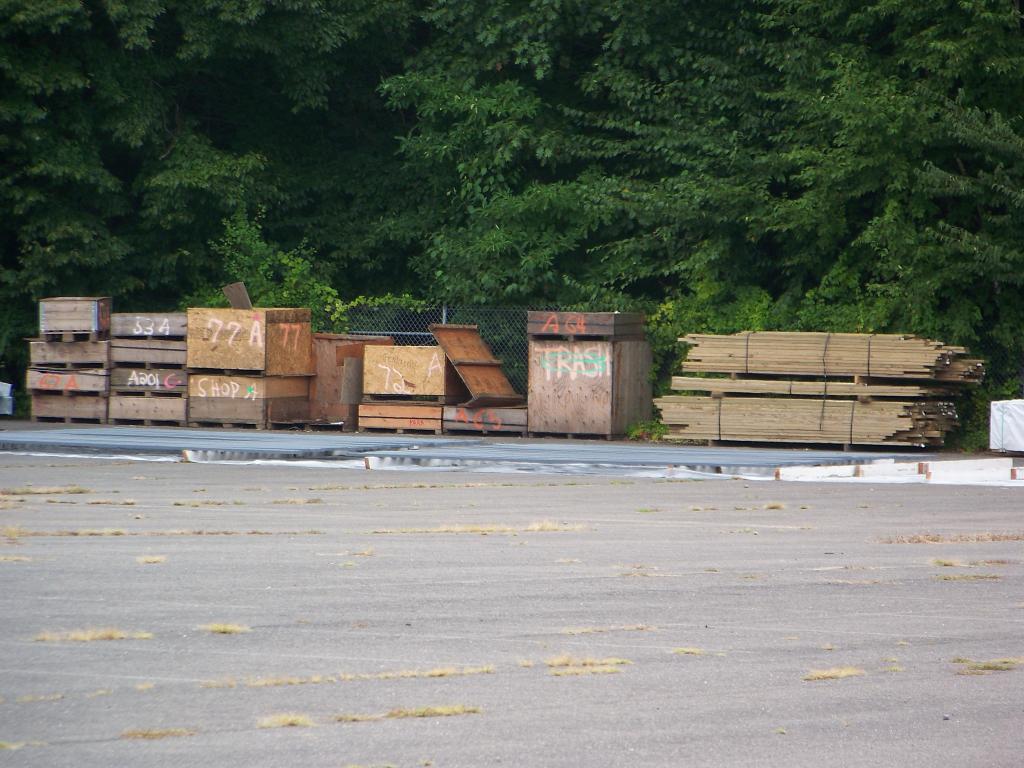 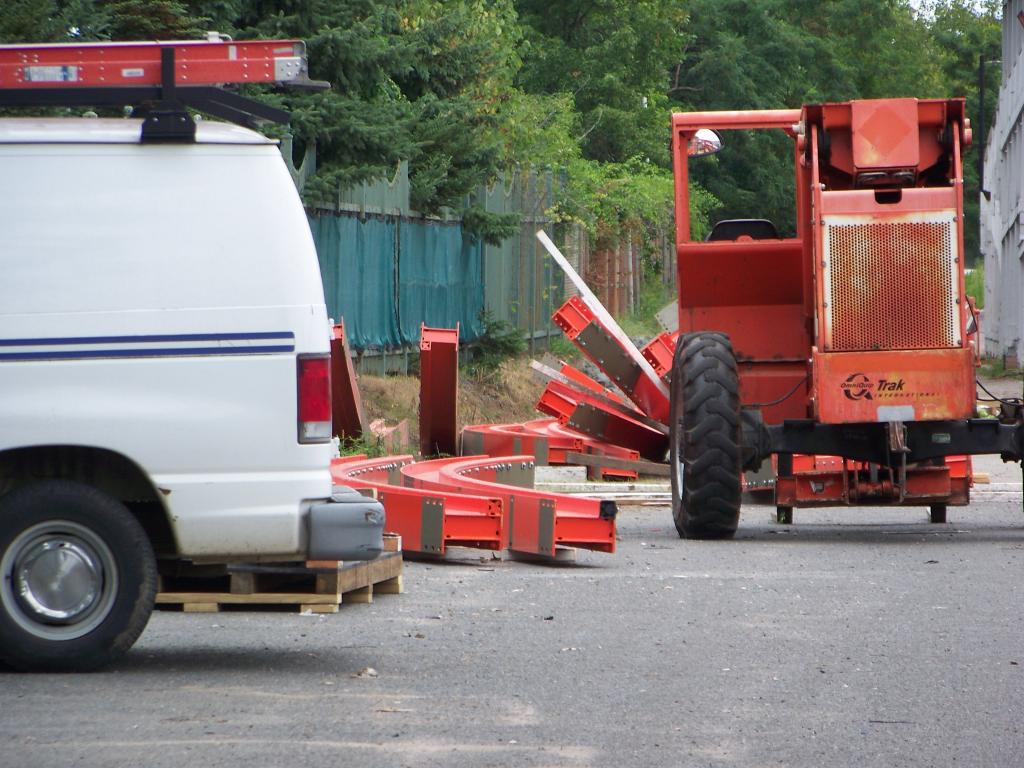 So we mentioned how new supports have been added to the lift hill. The bents (terminology for wooden cross frames) are being assembled in Cyclone’s entrance area: 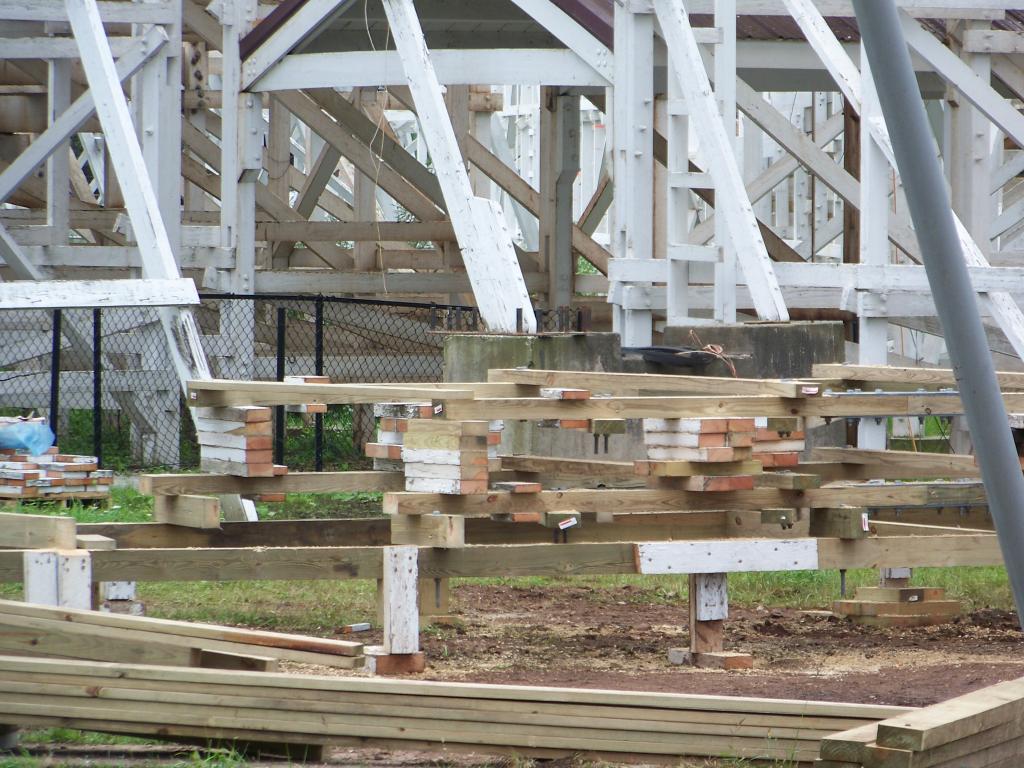 Once again, do you notice anything? 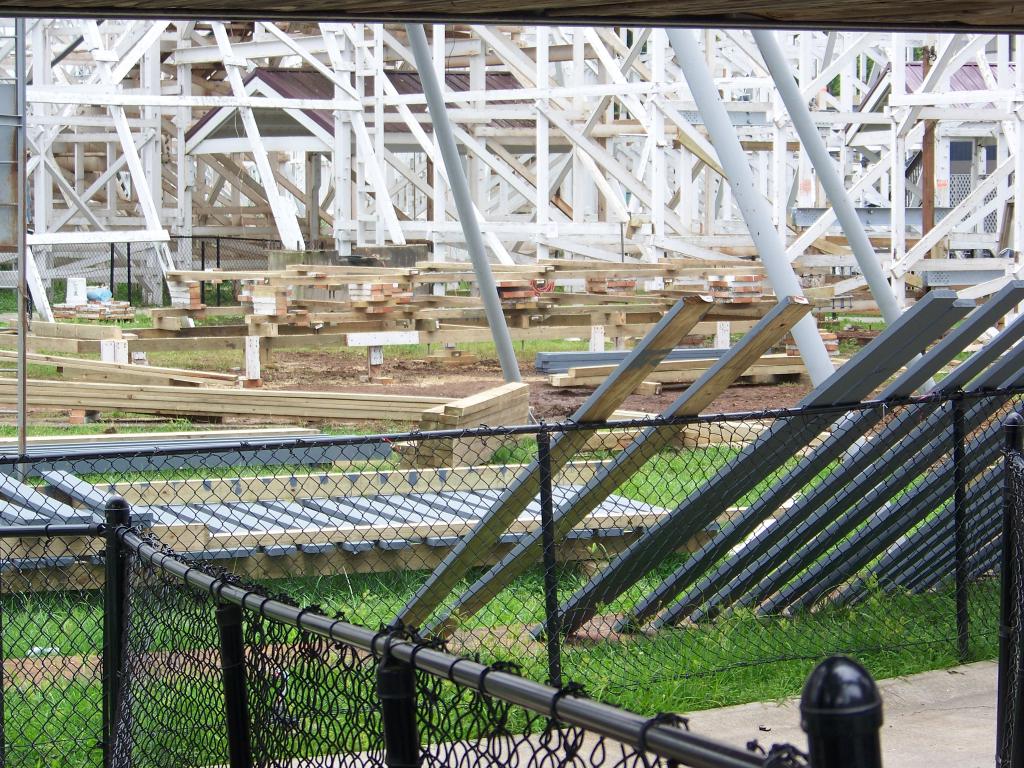 If you haven’t caught on yet, I’m referring to the colors for the new supports. Here is a close-up picture of the supports that were added to the lift hill. They have been painted a blue-ish gray color. 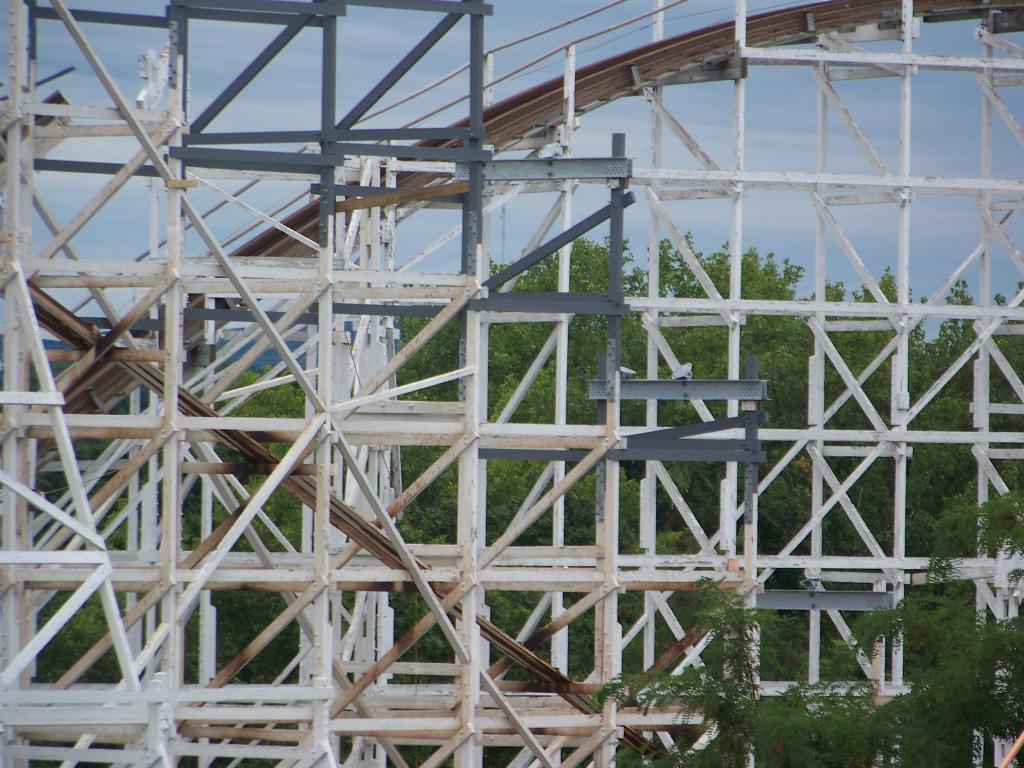 If you are worried about the colors… Don’t! It looks nice in person. I’m pretty sure the whole structure will be painted this color. Plus, the blue structure will fit nicely with the orange track. 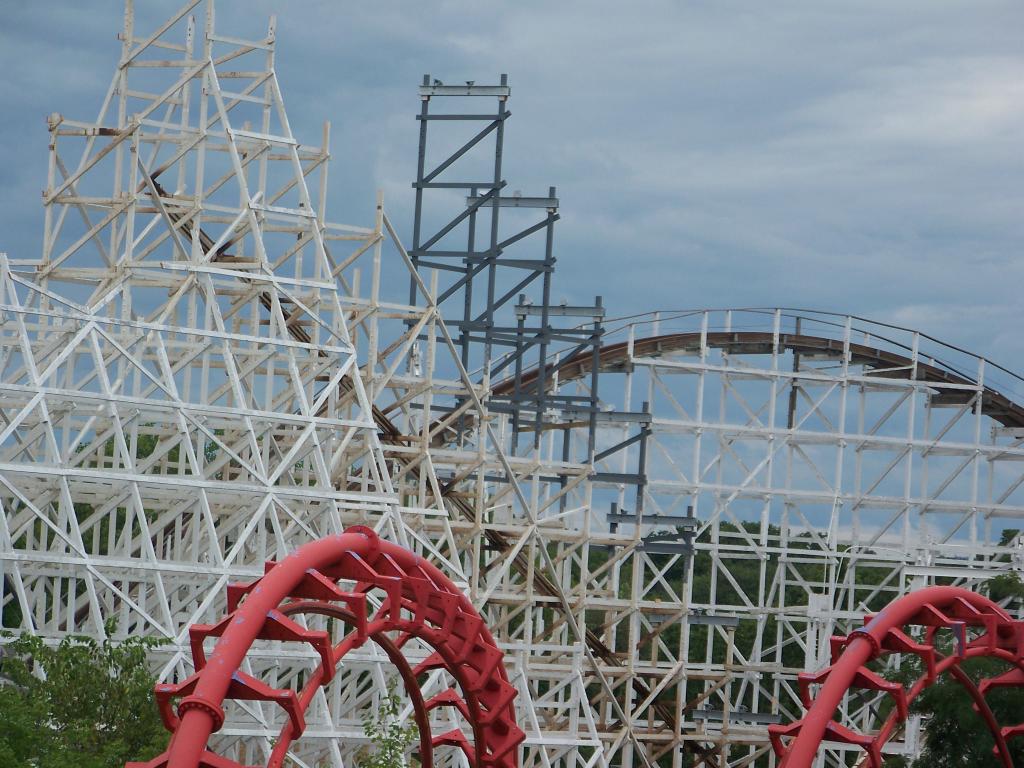 As you can tell, the lift hill is going to be much taller! 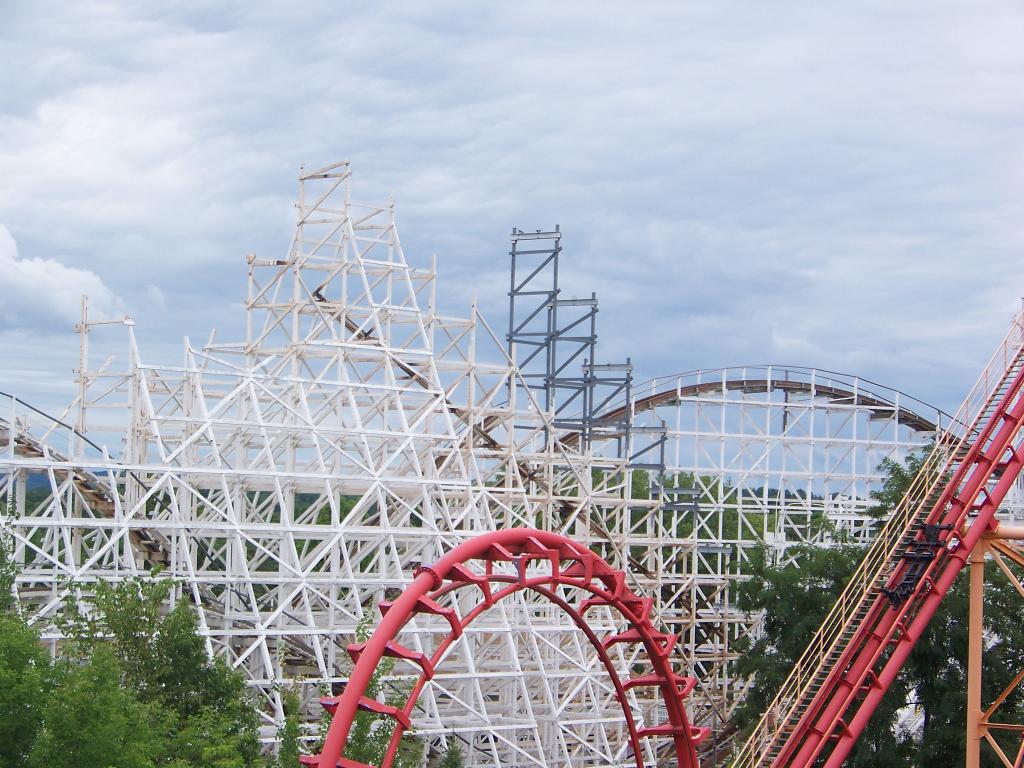 It also looks like the drop will be a bit farther back from where it was originally: 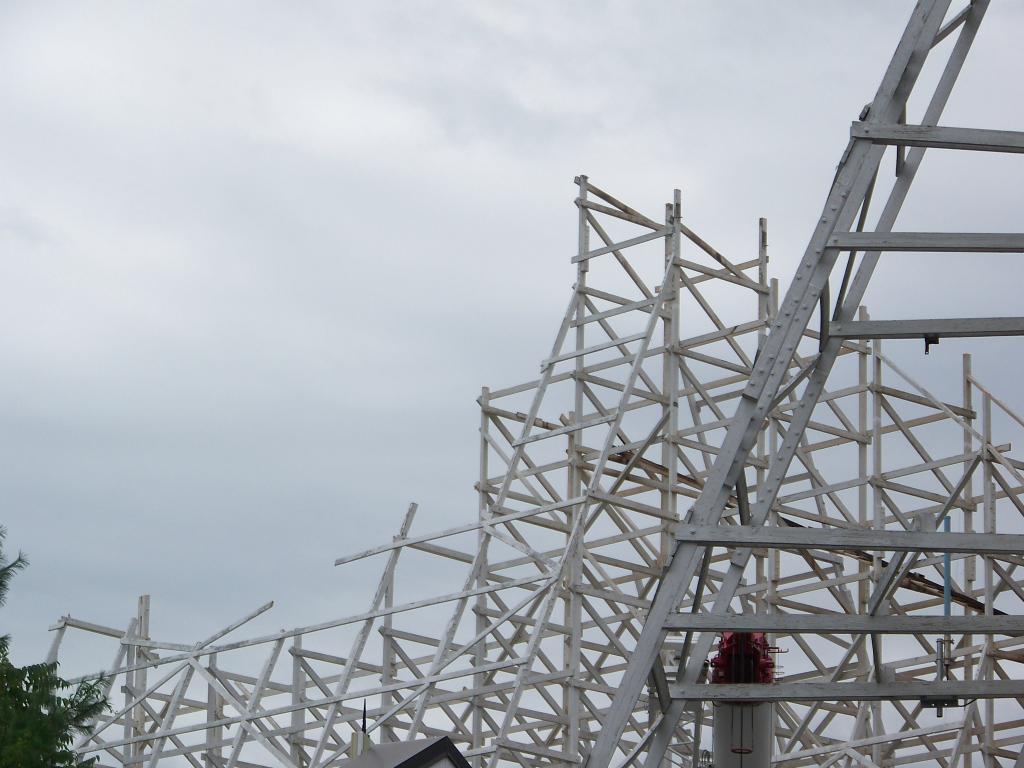 Heading outside the park now… This gives you a better feeling for how much taller and steeper the lift hill is going to be. We’re thinking that when all is said and done, the lift hill will be about 150′ tall. The original Cyclone was 112′ – which is a pretty substantial difference 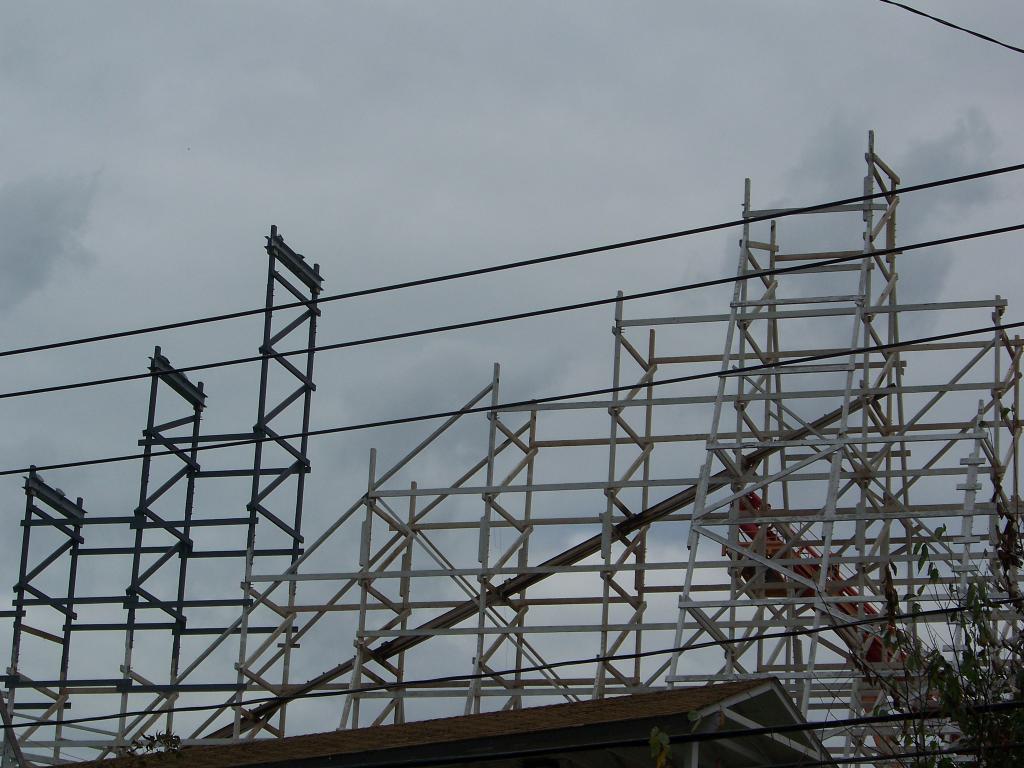 I wonder if the new track here will go through the lift hill instead of over it like it did originally: 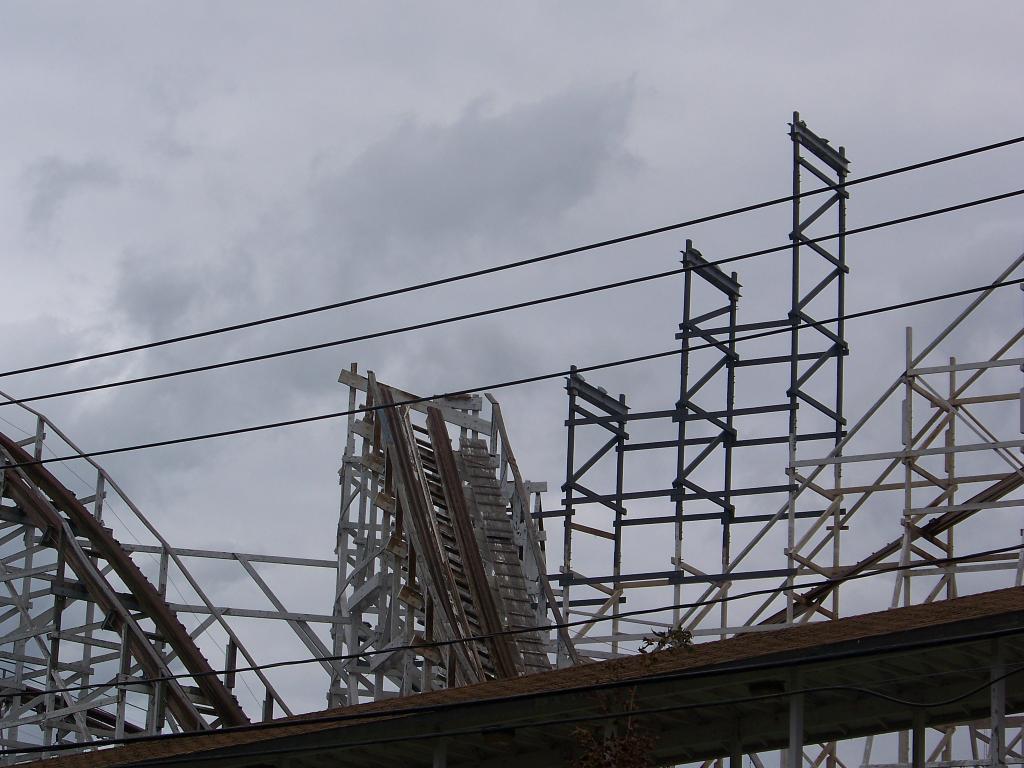 Closing out this report is a picture of the brake run. Steel cross beams have also been added here: 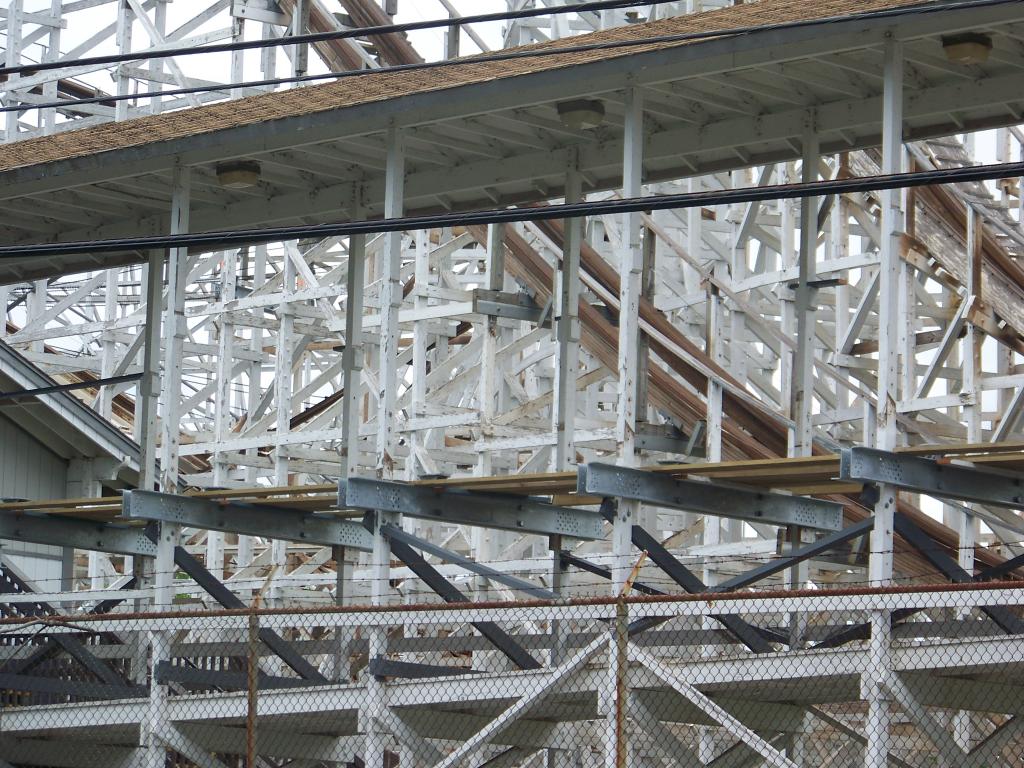 New banners have been placed around the park hyping the 2015 announcement. Text this number for an additional teaser. 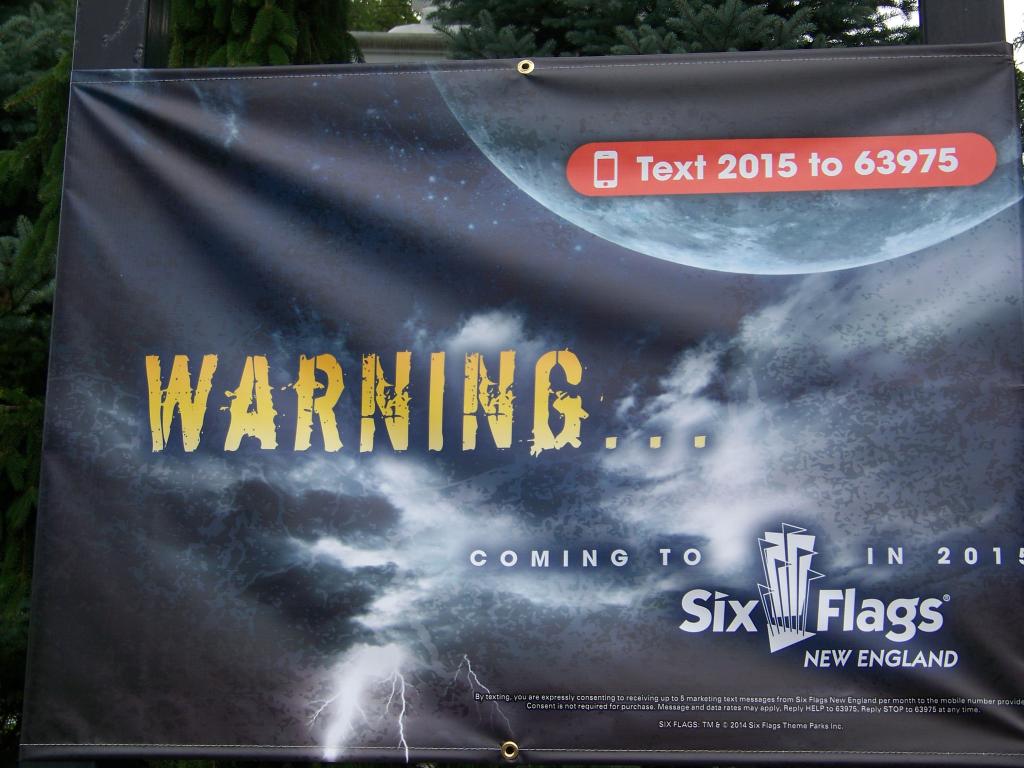 Six Flags New England uploaded a video teaser to their YouTube channel the other day. Click here to see that.

This will be the last update in which we don’t know what’s officially happening to Cyclone. The announcement is this Thursday! Be sure to join us for a live Q&A with Jen McGrath (Six Flags New England’s Communications Manager) and a surprise special guest on Thursday at 7pm EDT. You will be able to ask them anything about the 2015 announcement and Fright Fest. It’s gonna be a great time! Click here to learn more about this exclusive event.

What do you think of the new color for the structure?