Wicked Cyclone is coming to Six Flags New England in 2015!

Wicked Cyclone at Six Flags New England is new for 2015 – an all new hybrid coaster!

The day has finally come. After months of speculating, we finally know what exactly is happening to Cyclone. Cyclone is getting the Rocky Mountain Construction treatment! From here on out, it will be known only as Wicked Cyclone. Before we get into all the details, check out the epic new layout: 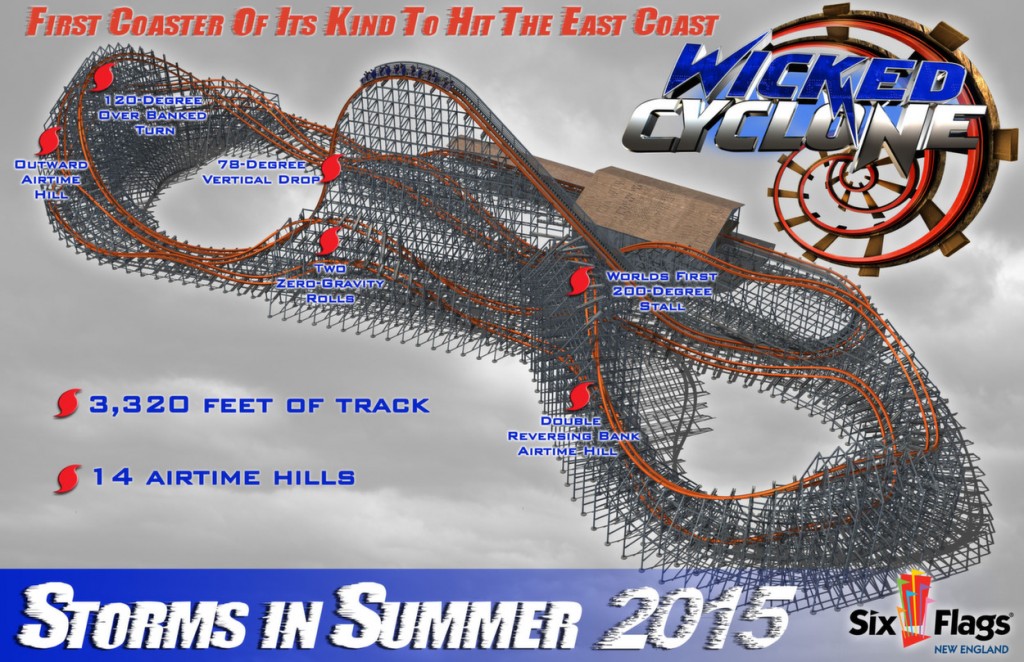 It looks like Bizarro now has some competition. According to Six Flags New England, Wicked Cyclone will have fourteen moments of airtime, more than any other coaster in New England! As you can see by this picture, there will be a ton of airtime! The 109ft drop at 78° will surely provide some ejector airtime. After that there is a 120° over banked turn, which leads into a smaller, outward banked airtime hump. That airtime hump will definitely provide airtime. Then it enters the first ever 200-degree stall. In this element, riders will be hanging upside-down for a few seconds. This is followed by some more over banked turns and then the double-down.

After that is the second outward banked airtime hill. This is another element I’m looking forward to because I’m sure it is going to provide the most intense ejector air I’ve ever experienced. Then there is a smaller airtime hill after that. Finally you enter the brakes. So yeah, the airtime on Wicked Cyclone is going to be relentless! 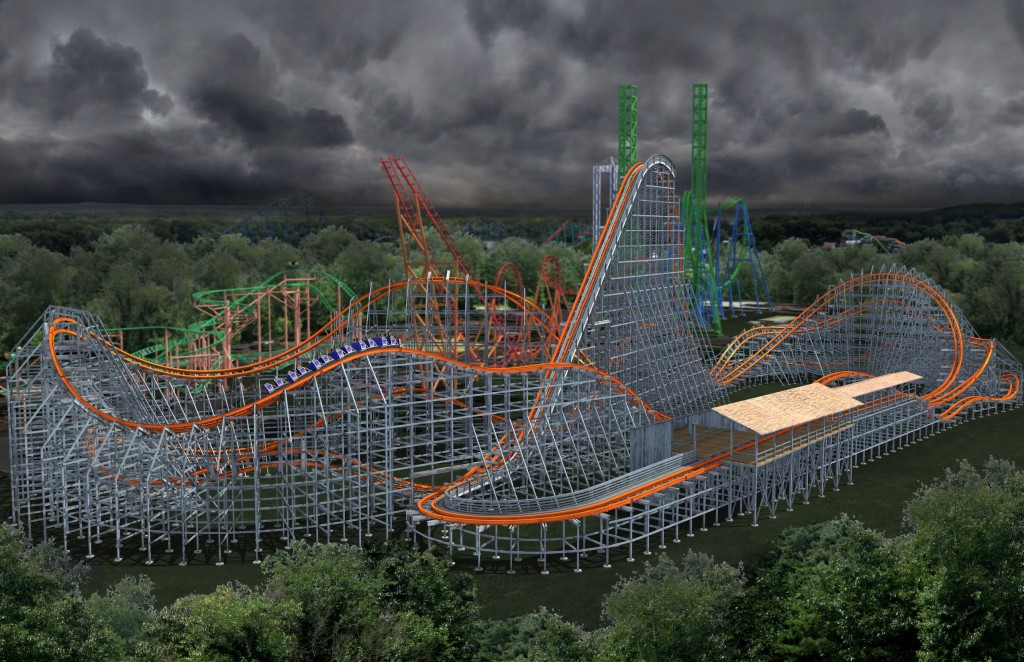 Wicked Cyclone is going to have some structural changes. The most major of the changes is happening at the turnaround where the entrance is. I think this is a good time to mention that the entrance will be the same for Wicked Cyclone as it was with Cyclone. It will also use most of the same queue but with some major extensions to it to accommodate the huge crowds expected for Wicked Cyclone. The station will not see any major changes either. They are going to work on improving the grouping for Wicked Cyclone, so hopefully this will fix the chaos that was experienced in the station before.

Okay, back to the changes. The big changes to the structure in this section of the layout starts with the addition of the world’s first 200-degree stall. You will notice that this goes through the lift hill instead of over it like how the airtime hill went over the lift hill on Cyclone. From there it goes into an over banked turn and then a double-down element that is meant to give a ton of ejector airtime. Now I can’t tell for sure, but from the picture below it looks like they are going to have to expand the radius of this turnaround section. Maybe this is the reason for the removal of New England Skyway? 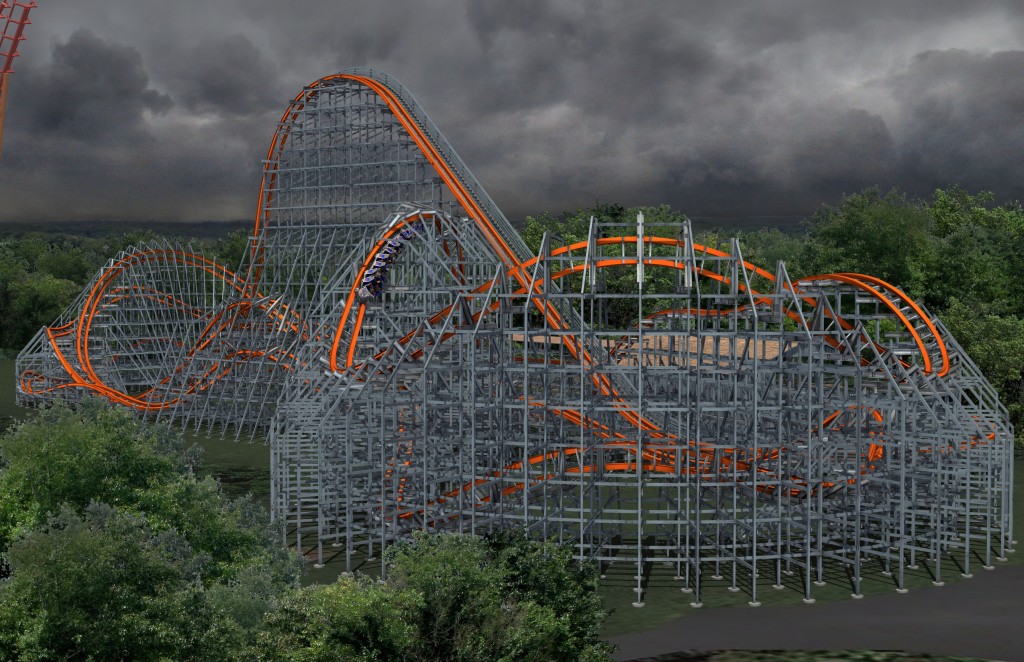 The height of Wicked Cyclone is 109 ft, which is a few feet lower than it was with Cyclone. This was done to accommodate the bigger/steeper drop while still allowing the first over banked turn to fit on the existing structure. 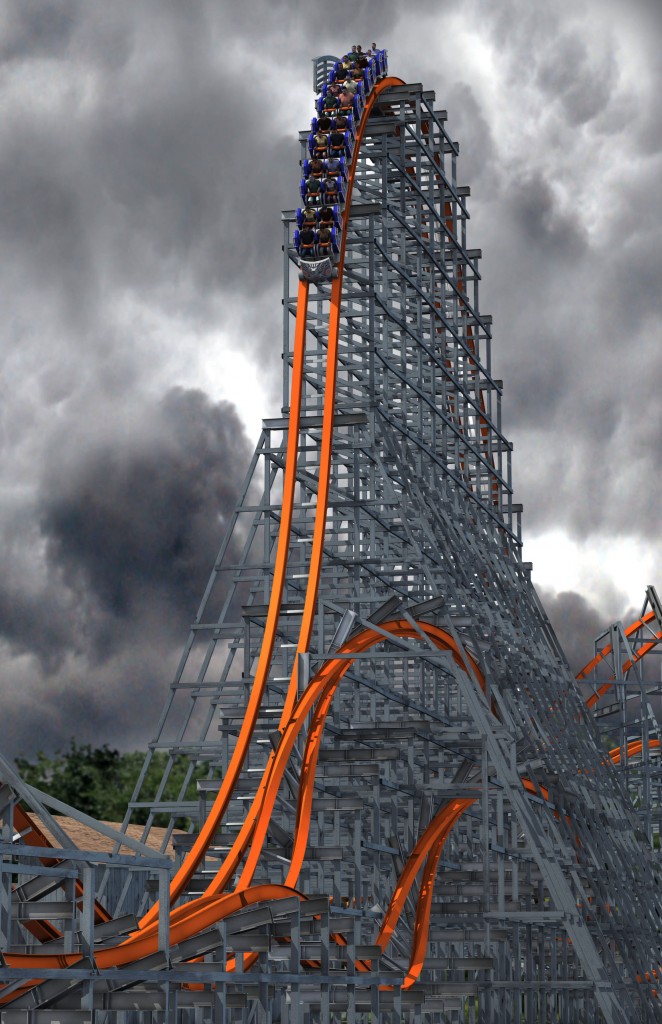 After the drop it enters the 120° over banked turn. Those supports are going to provide some pretty crazy head chopper moments! 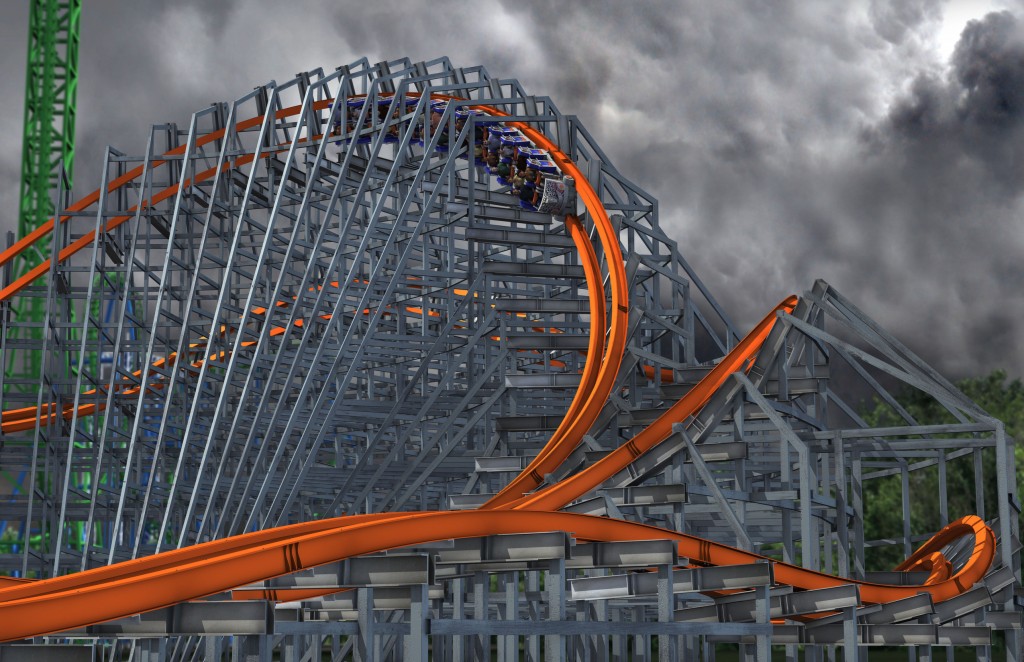 A closeup shot of one of the two zero-g rolls. 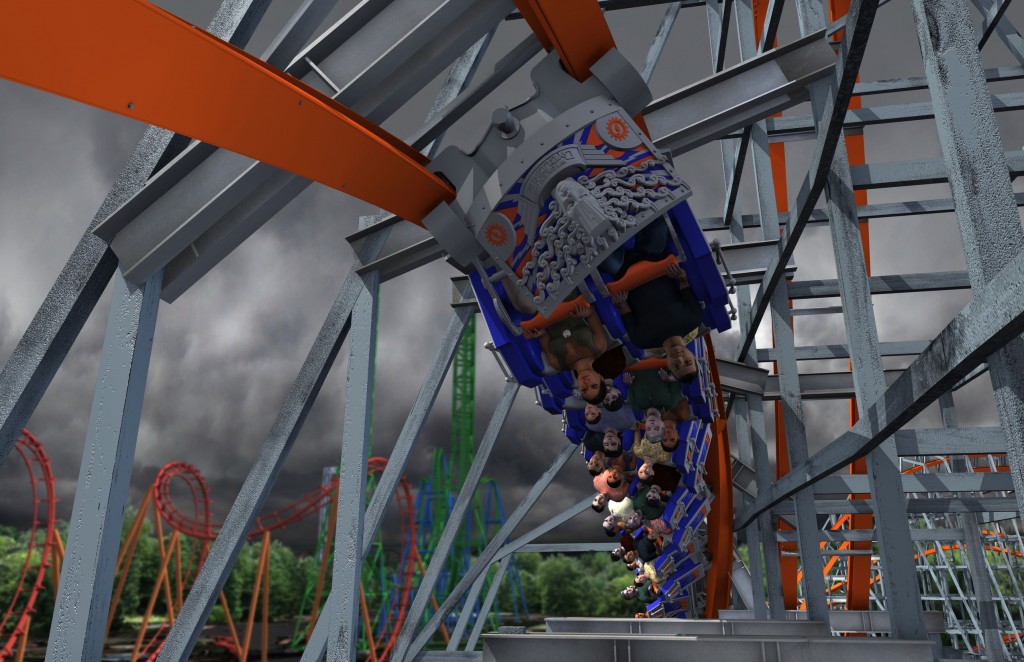 Now let’s take a moment to admire the beauty of Wicked Cyclone’s trains: 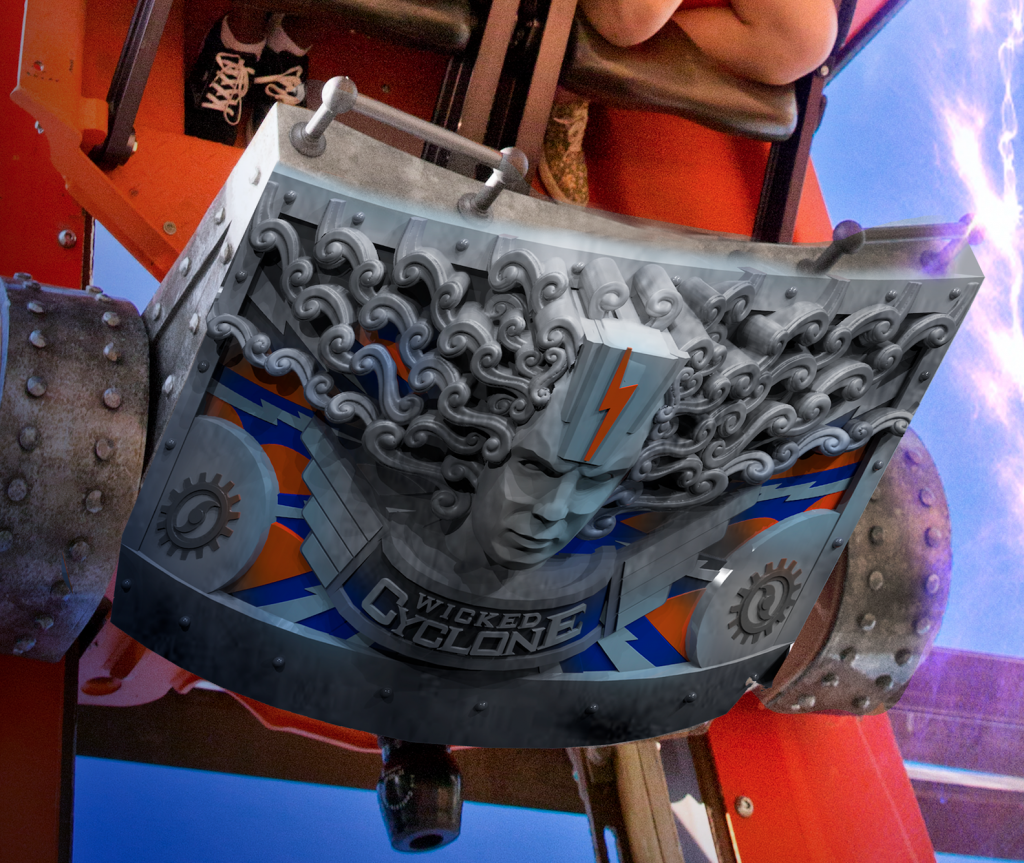 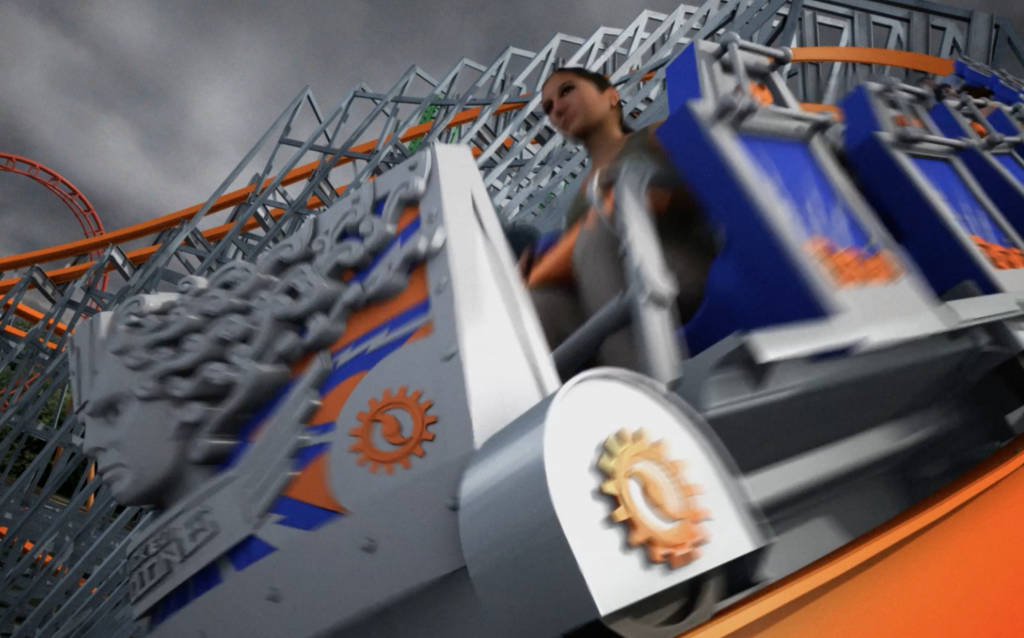 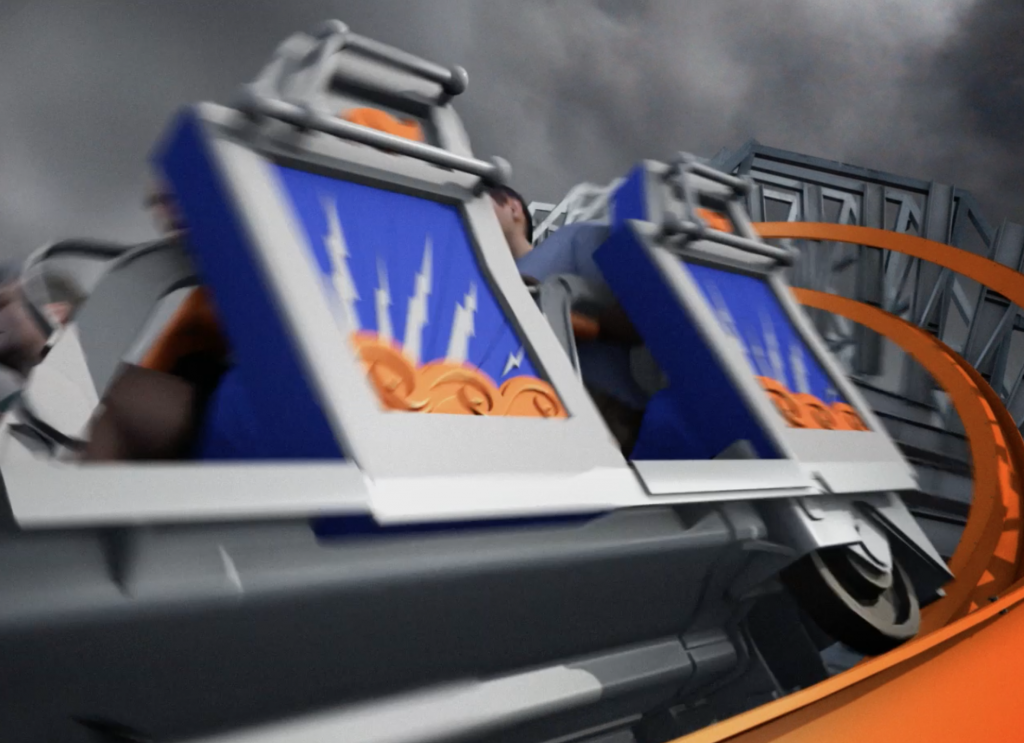 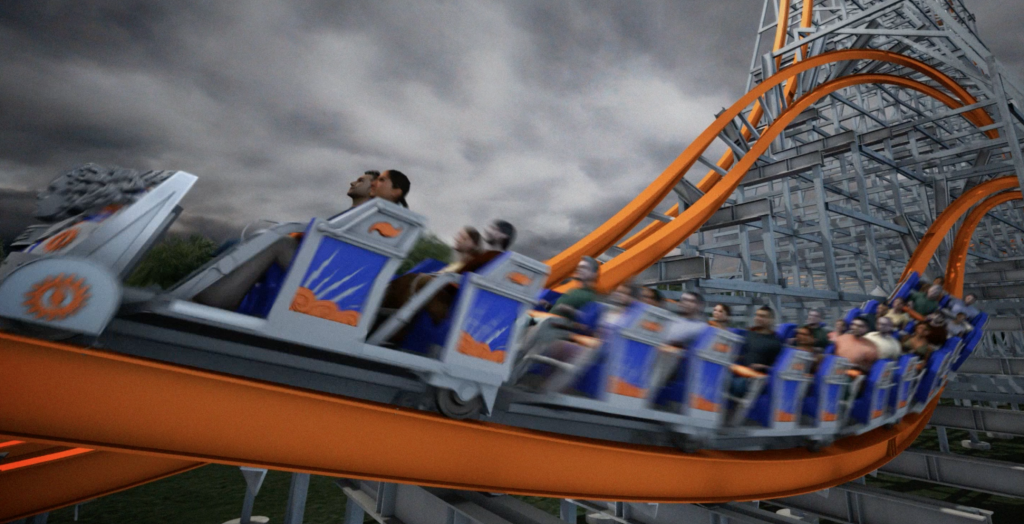 I’m in love with all the little details on the train: there’s the meteorological symbols for storms, lightening bolts and clouds, and the head. You might be thinking, “Wow, Six Flags is so cheap! They’re just reusing the Medusa head from Medusa Steel Coaster.” I can assure you, they’re not. In fact, the head is nothing like Medusa’s. This head is the head of a god-like creature who creates powerful storms. You can see this theme carry out through the whole train.

According to the park, the head symbolizes the intensity and ferociousness of Wicked Cyclone. It will also tie into some of the theming, which is being kept under wraps for now.

Since we’re on the topic of the trains, the trains will use a lap bar restraint. The lap bars also have a small bar that go across the lower portion of your legs. This keeps riders in securely. There are also seat belts. And for those who want to really nerd-out, the trains will be using urethane composite wheels. Yay wheels!

The park also explained to us that the name for Wicked Cyclone was inspired by what riders would use to describe the coaster following their ride. If I had watched the animation without knowing the name of the ride, and being from New England, I know for a fact that I would say, “Holy crap! That ride looks wicked awesome!” So I approve of the name. I was skeptical at first but it has slowly grown on me.

Six Flags New England, the Thrill Capital of New England, today announced plans to add a new state-of-the-art roller coaster that integrates the latest in ride technology and innovation to Massachusetts—Wicked Cyclone. The Wicked Cyclone will offer the ultimate in thrills and adrenaline combining the extreme characteristics of both steel and wood to build the first hybrid roller coaster to hit the East Coast.

“We take great pride in creating incredible, one-of-a-kind experiences for our guests here at the Thrill Capital of New England,” saidJohn Winkler, Six Flags New England Park President. “This project has been years in the making, and the addition of Wicked Cyclone enhances our commitment to delivering world-class thrills to Six Flags New England every year.”

Wicked Cyclone’s steel track provides riders with a smoother and more intense ride along its 3,320 feet of track. The ride stands 10 stories in the sky and reaches speeds of up to 55 mph. Once the twenty-four thrill seekers board Wicked Cyclone, it quickly climbs the 109-foot hill to then plummet at maximum speeds while providing riders with weightlessness and a truly wicked ride. Wicked Cyclonewill be the first coaster of its kind to have a 200-degree stall and two Zero-G Rolls. Riders will also be able to experience more airtime than any other coaster in New England on Wicked Cyclone.

Wicked Cyclone will be storming into Six Flags New England, summer 2015 and will be a “must ride” for the ultimate thrill seekers.

What do you think of Wicked Cyclone? Discuss this in our forum.