Only a small portion of the original Cyclone track still remains. This is Wicked Cyclone construction update #12. 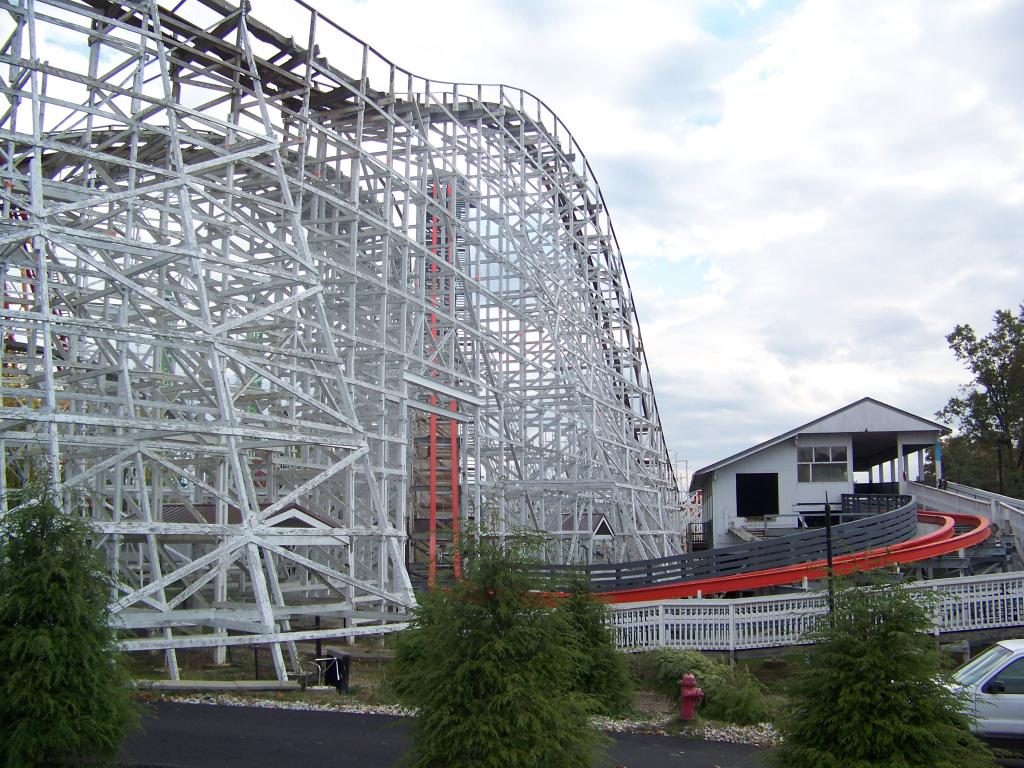 This update is going to be on the shorter side as the pictures didn’t turn out that great. Not only was the weather crappy, but we weren’t able to get any pictures from New England Skyway because it broke down and closed for the day. The picture above and the two below are the only ones that were taken when the weather was nice. 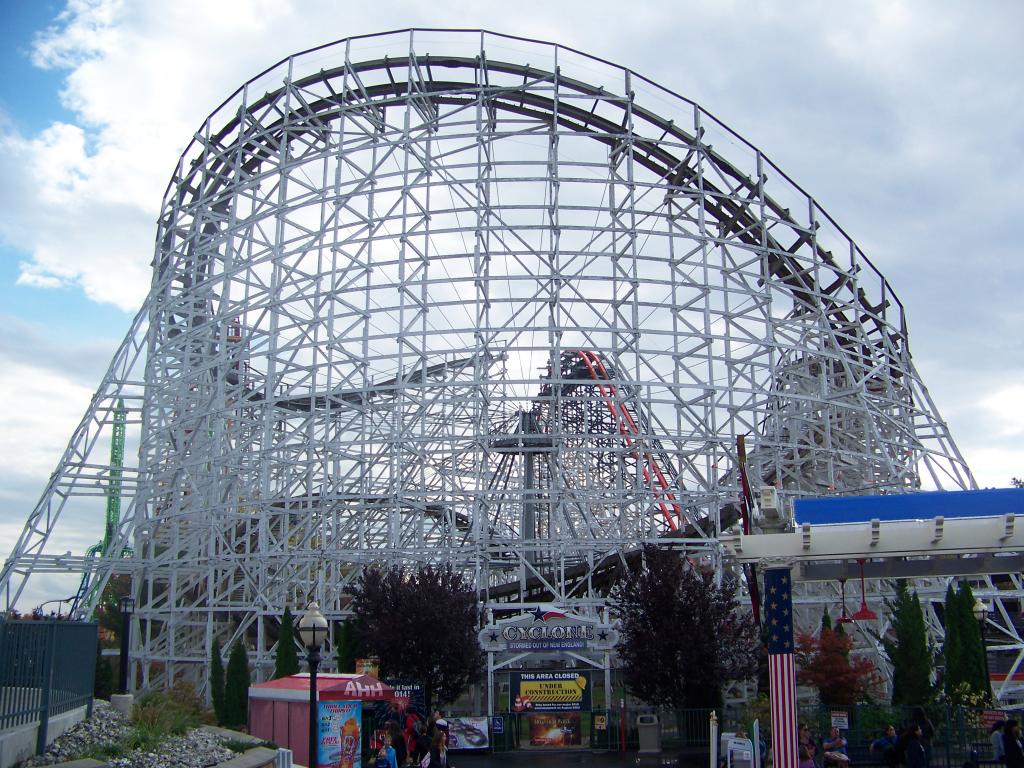 The remaining track near the maintenance building has been removed. This is all that remains: 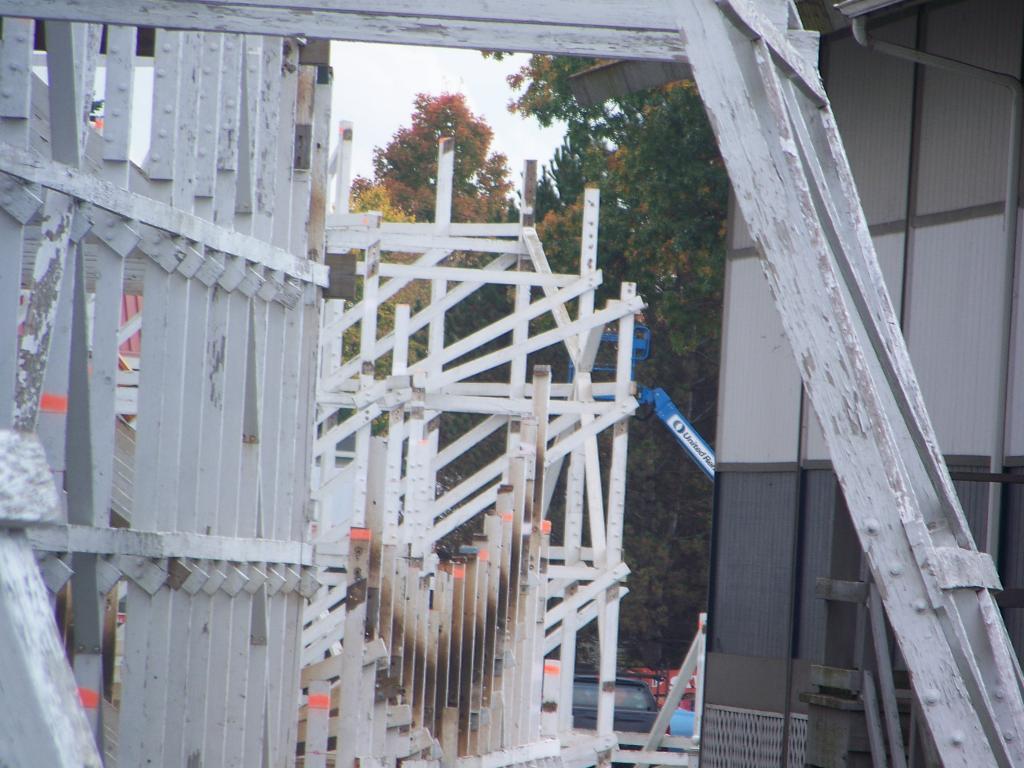 Okay, now the rest of the pictures are from when the storm rolled in…

The track for the first drop is now complete as it now goes all the way to the ground. 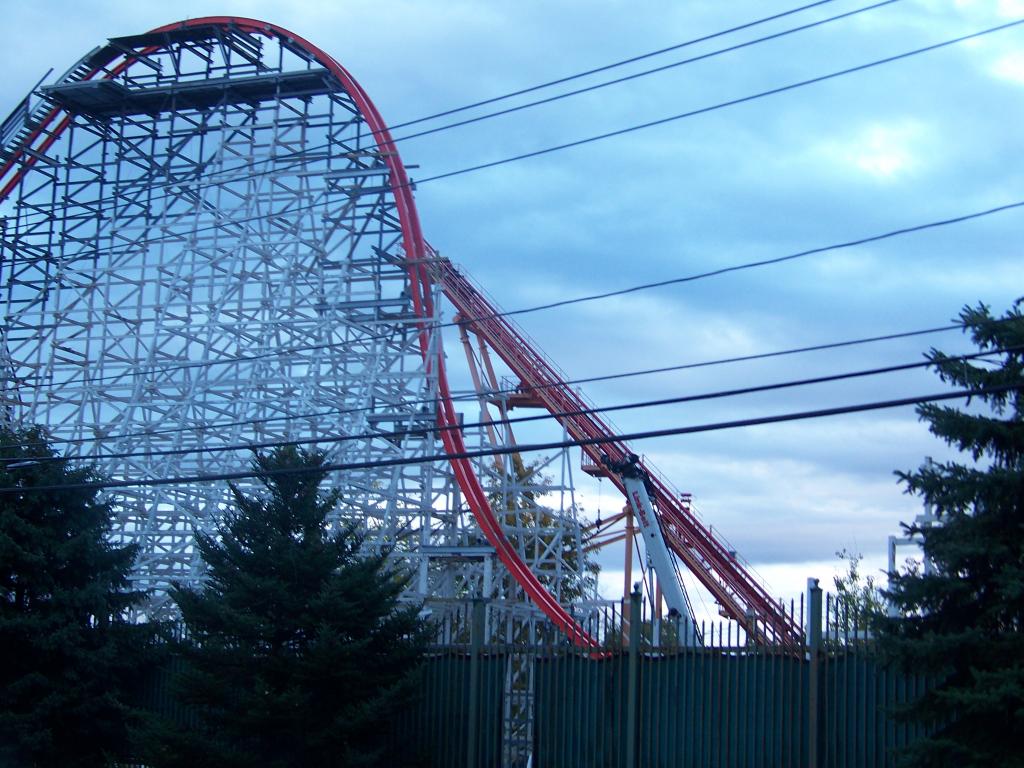 One side of the I-box track has been installed going into the 120° over banked turn. 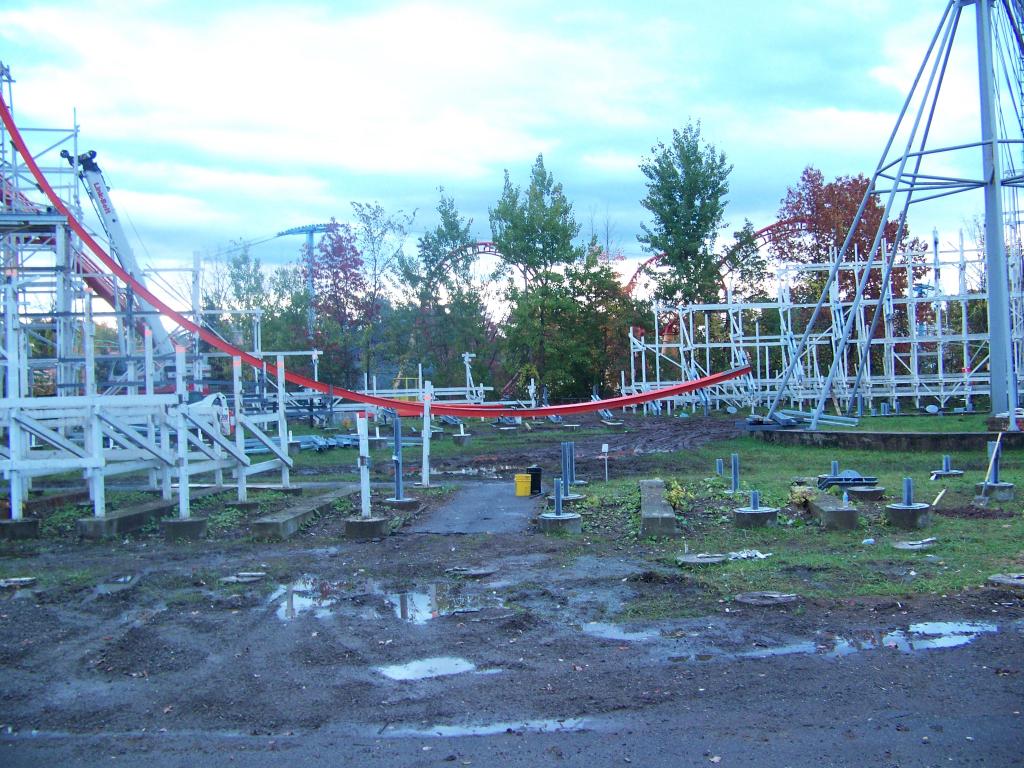 And speaking of the 120° over banked turn… You can clearly see where the track will go. 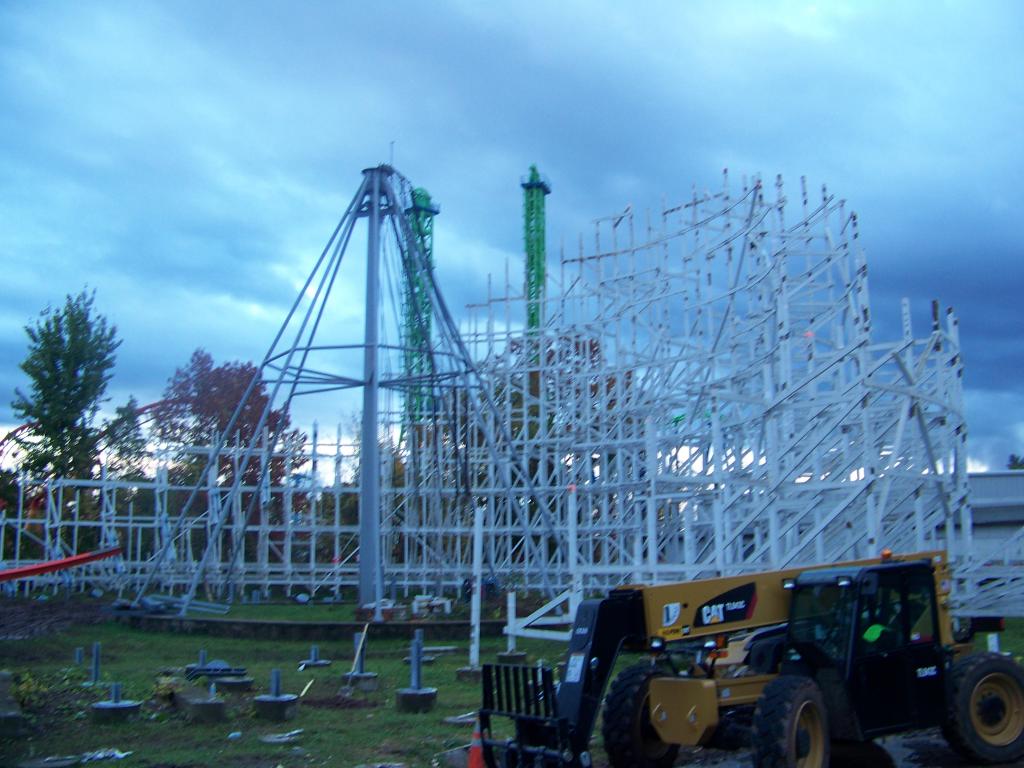 Here are some pictures from a slightly different angle: 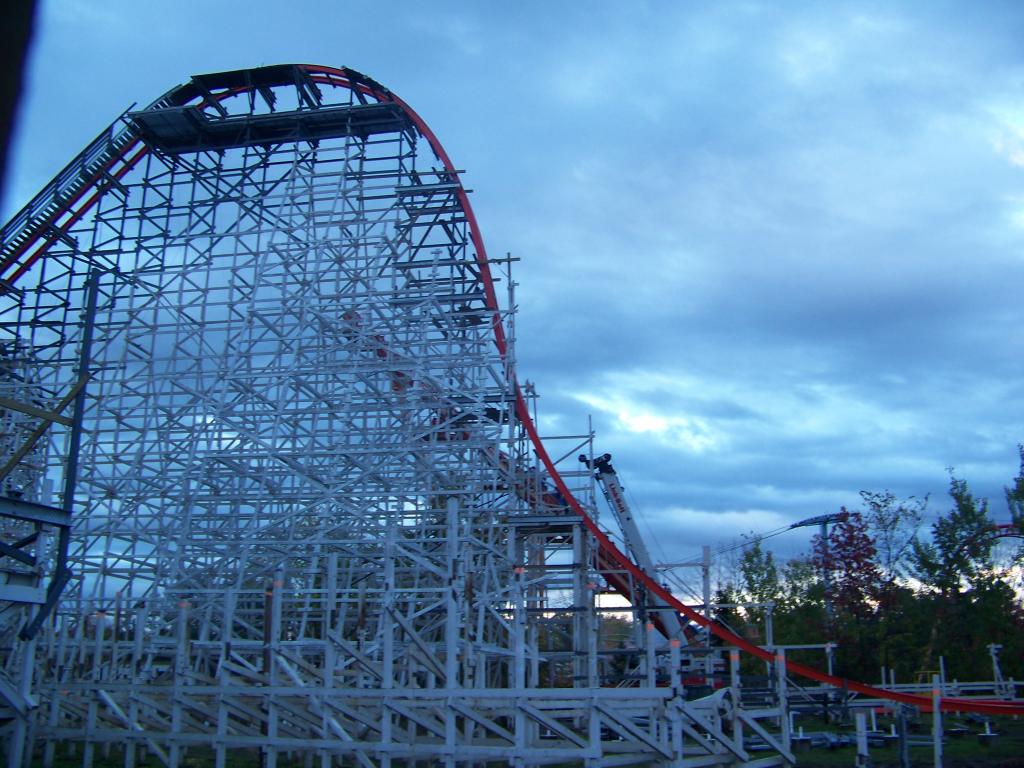 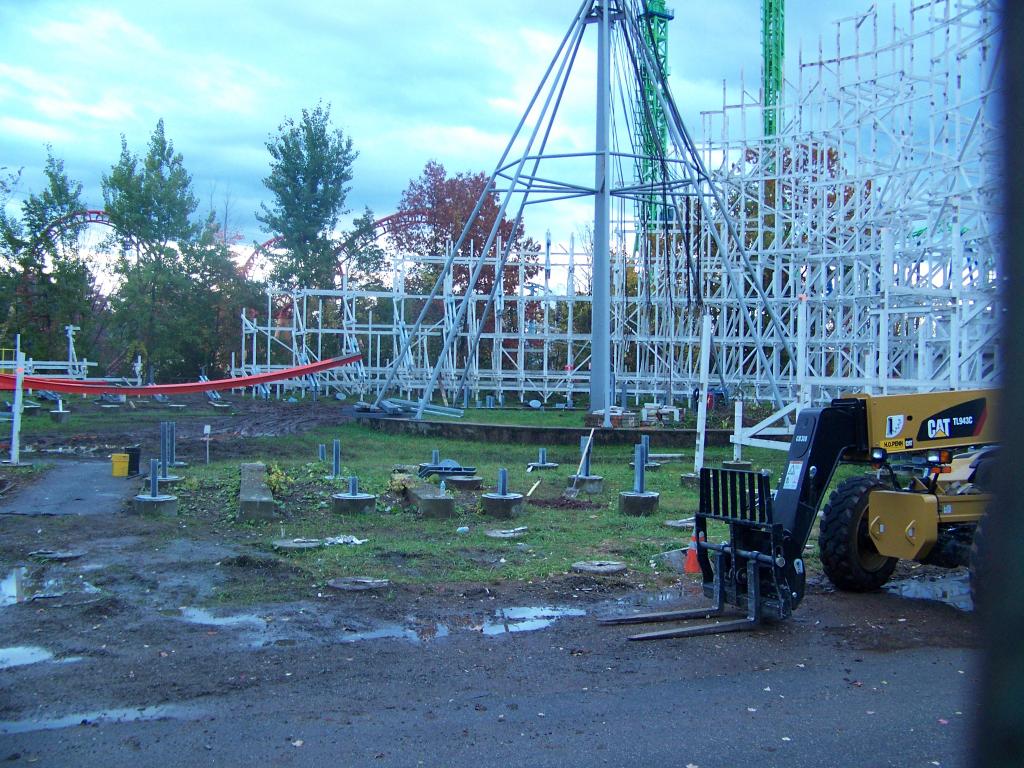 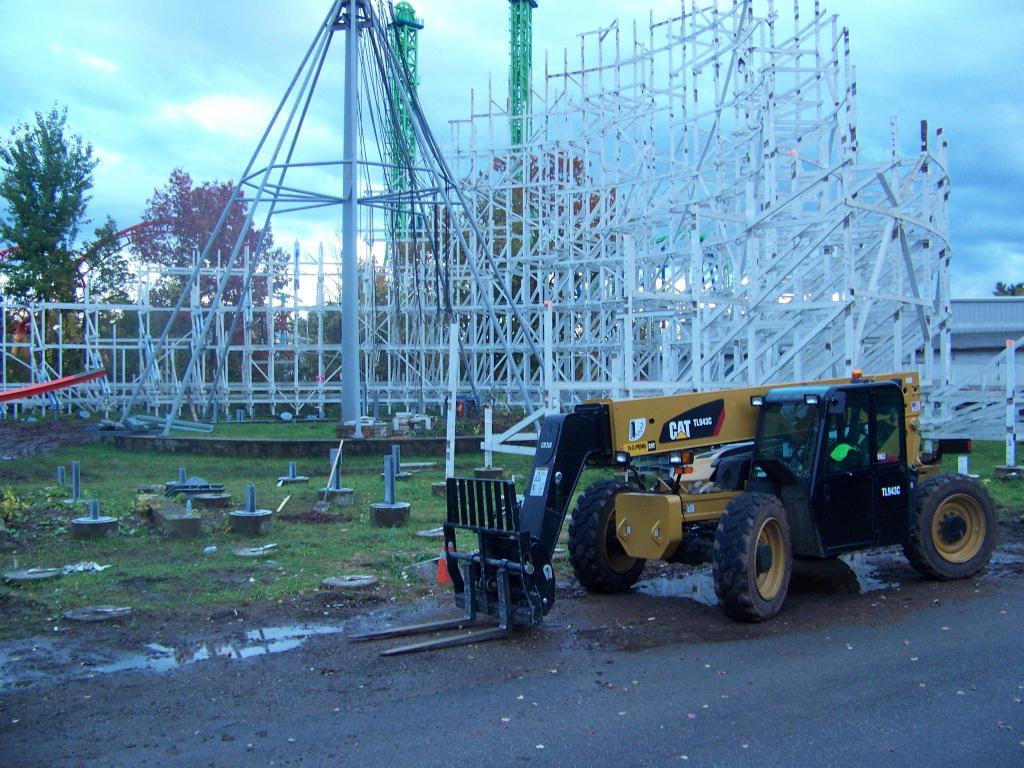 All of the original Cyclone footers are being reused for Wicked Cyclone. They place these steel plates over the existing footer and bolt them into the cement. The Coaster Guy has mentioned this in his updates of Twisted Colossus, but due to the limited access to Cyclone’s area, we haven’t been able to see this here until now. 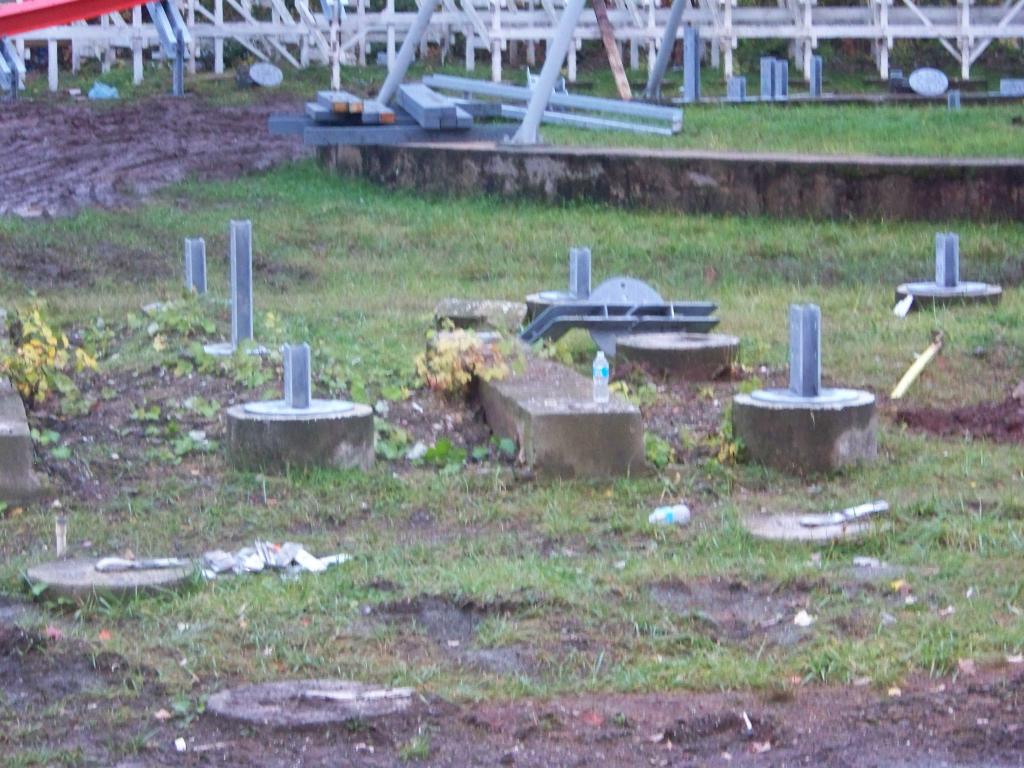 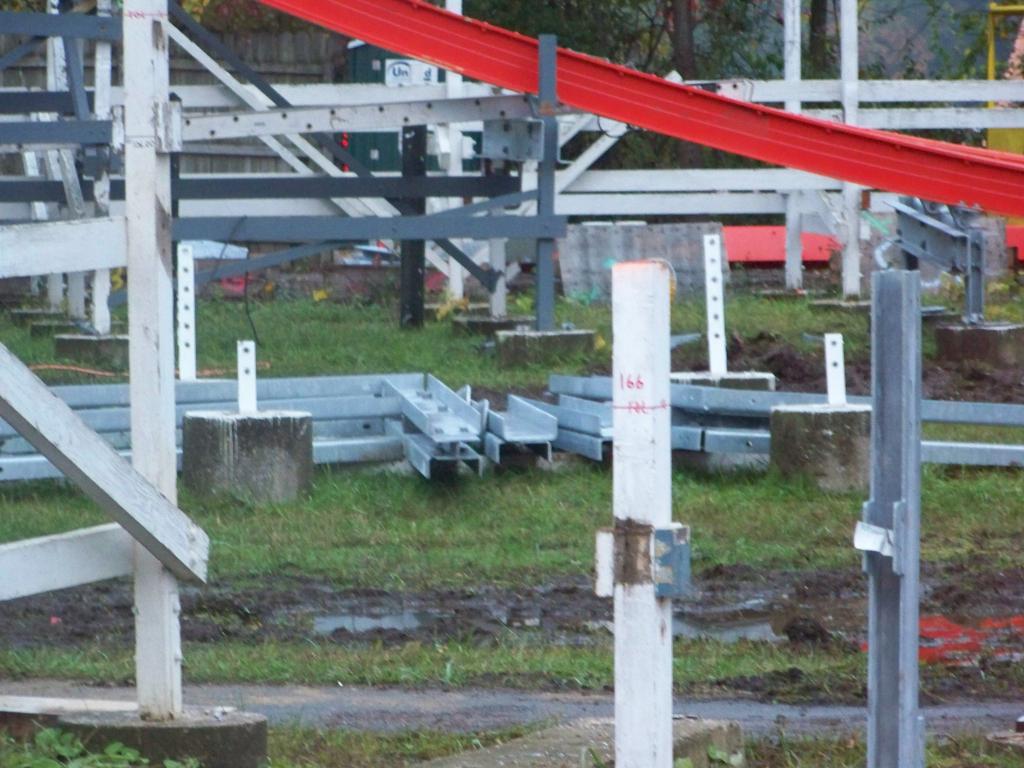 More pieces of wood waiting to be assembled into bents. I think I’ve said this before, but I’ll say it again… The gray is really growing on me. 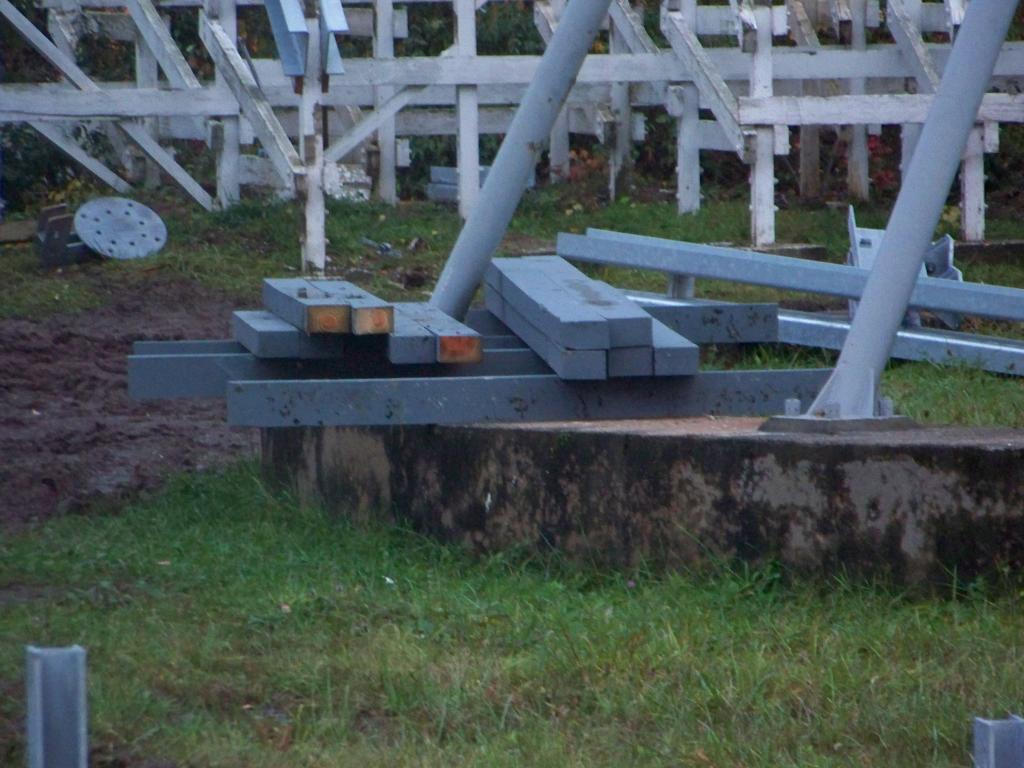 Up close view of the valley between the first drop and 120° over banked turn. 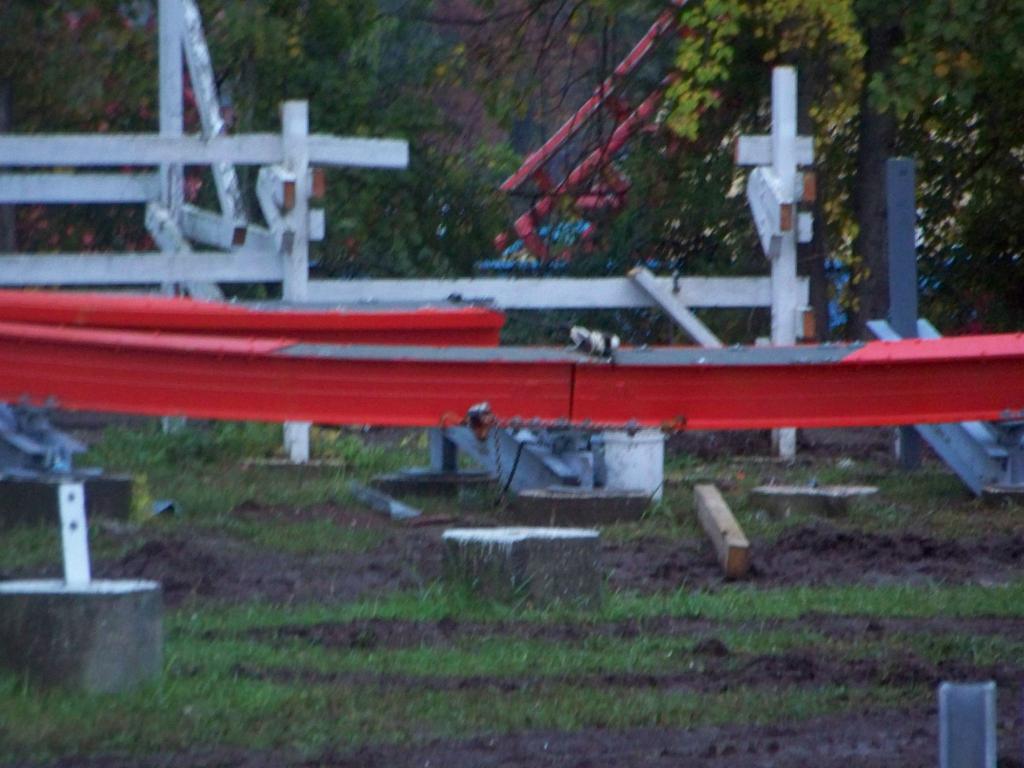 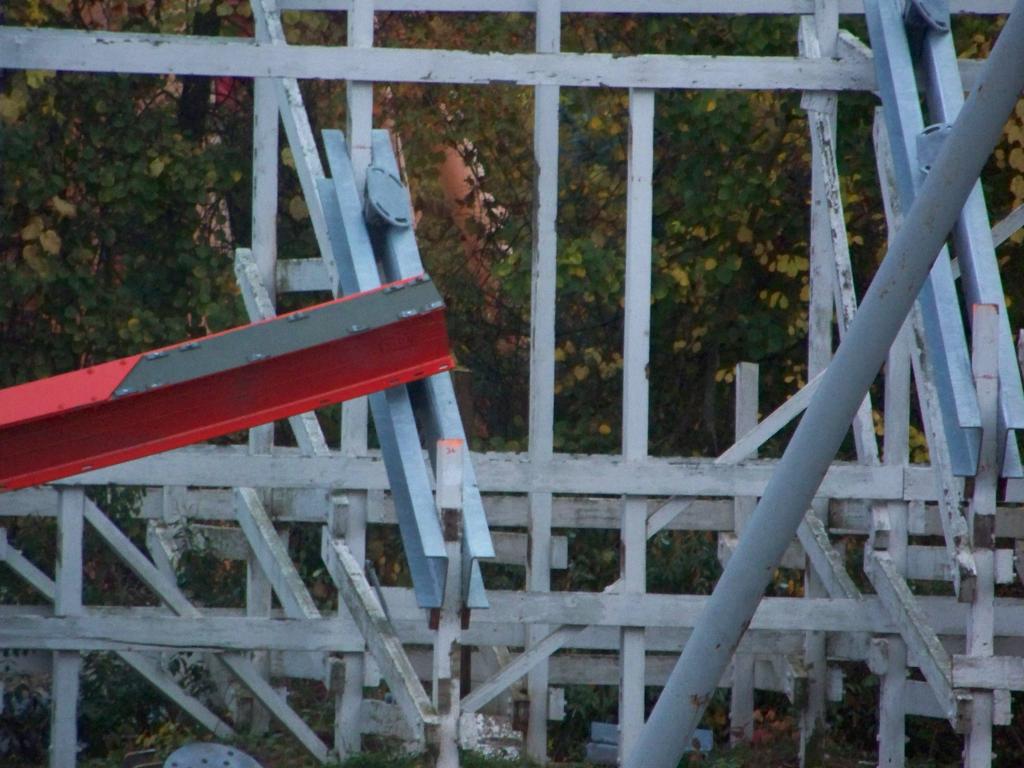 Now for some random pictures to close out this update. 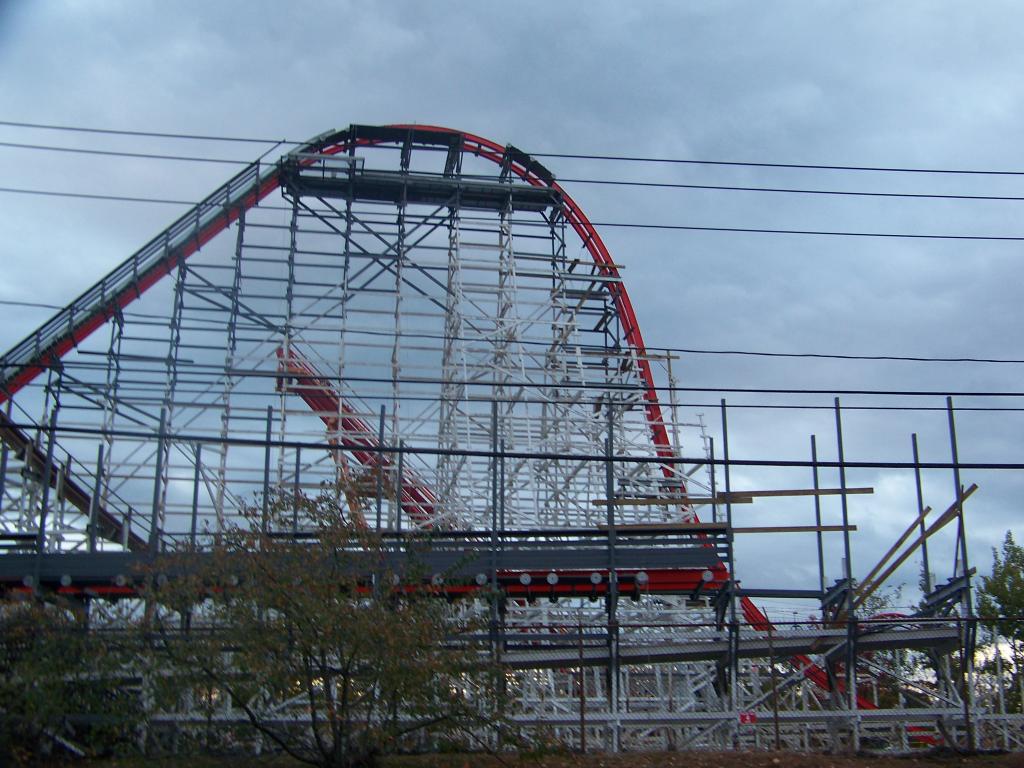 I really wonder what they’re going to do with the steel support towers on each side of the coaster. They won’t be needed with Wicked Cyclone. Think they’ll just keep them up for theming of some kind? 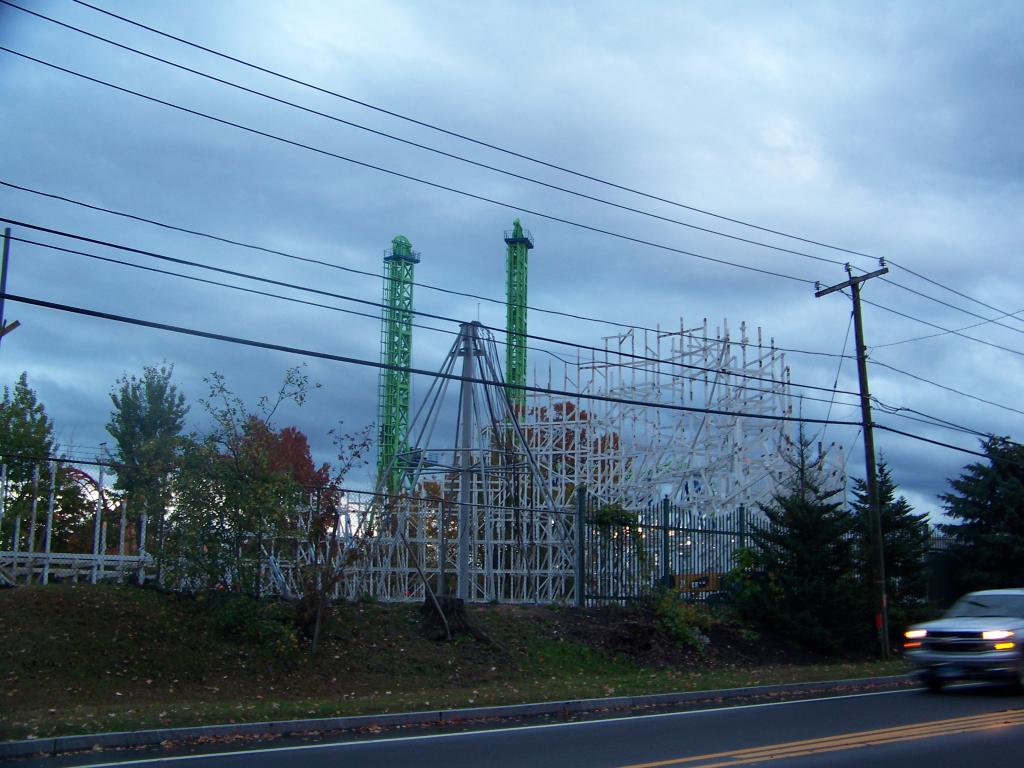 Look at how much of original Cyclone remains. And to think, just three months ago, people were still riding this coaster. 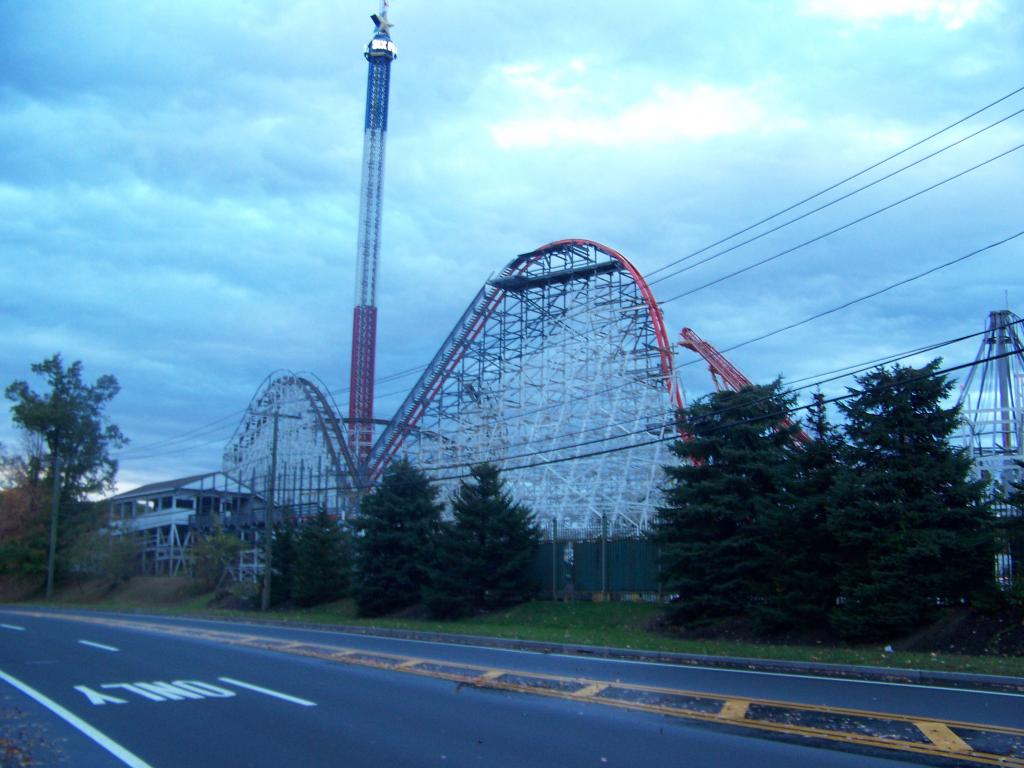 Six Flags New England closes in just two short weeks, which means there will only be two more weekly updates. After that, updates will likely be bi-monthly. Be sure to like us on Facebook and follow us on Twitter to be updated when a new construction update is posted.