It’s been two weeks since our last update and now there are no more pieces of original Cyclone track remaining. This is Wicked Cyclone construction update #15. 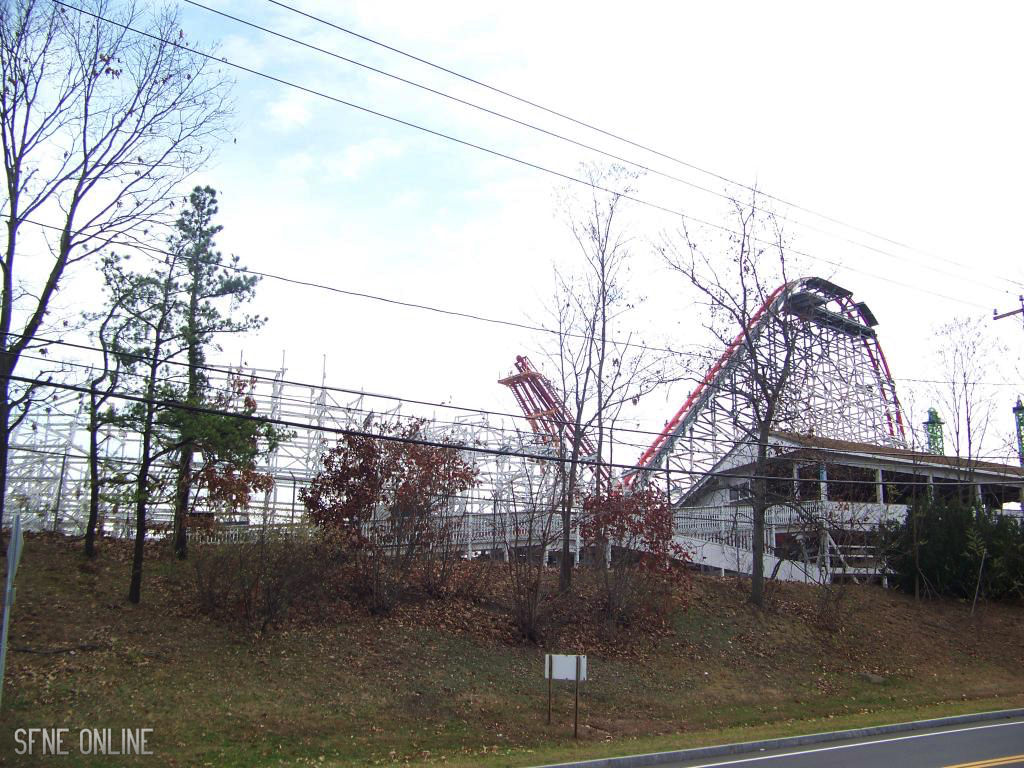 Driving to the park from the Massachusetts side is going to look a whole lot different in 2015. Up until this year, the Cyclone structure was the first thing people would see as they were driving to the park. Now, that structure is practically gone. Wicked Cyclone will be a high-speed coaster that stays lower to the ground, unlike it’s predecessor which was the complete opposite. 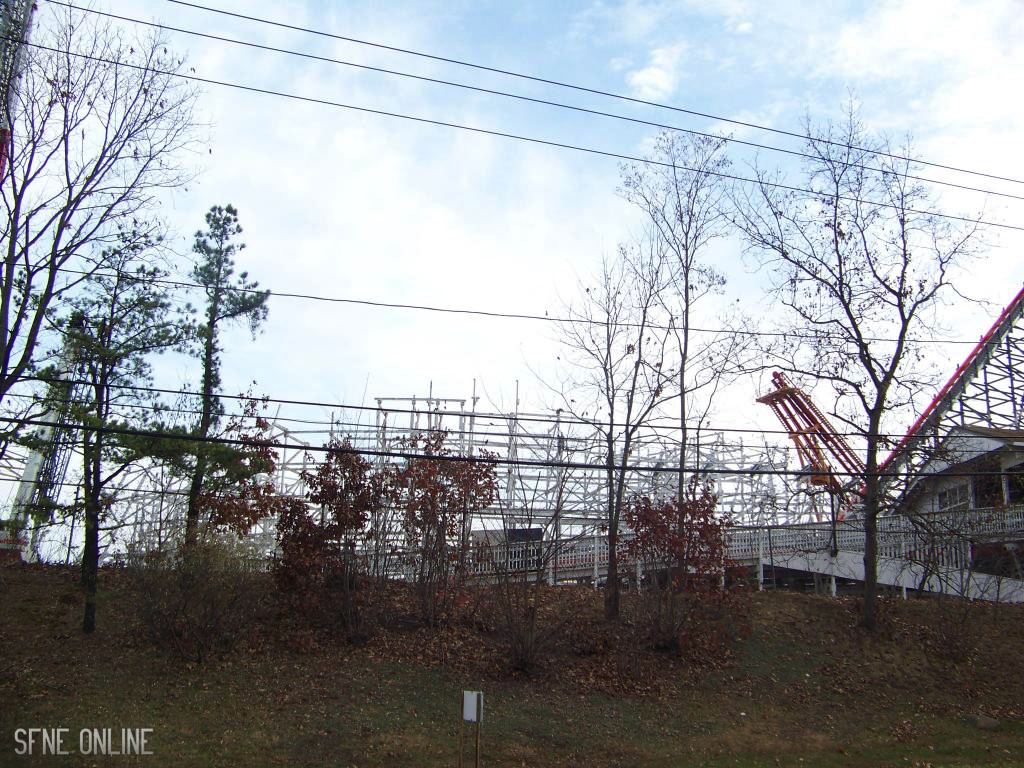 Also finished within the last two weeks was the roofing above the brake run: 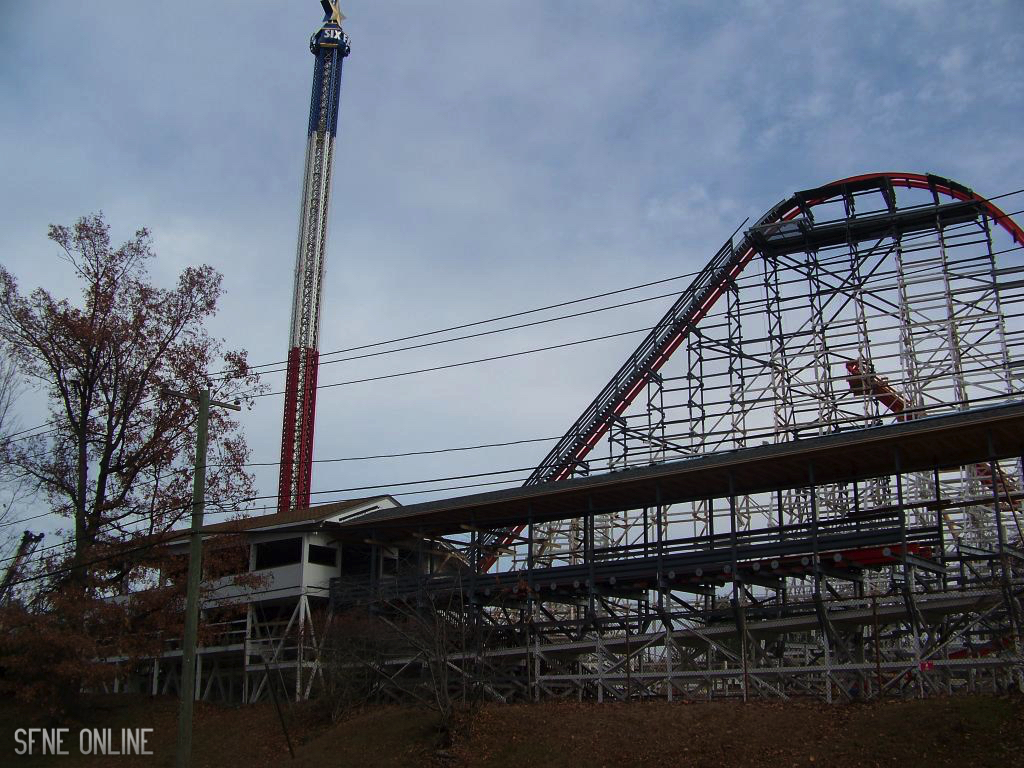 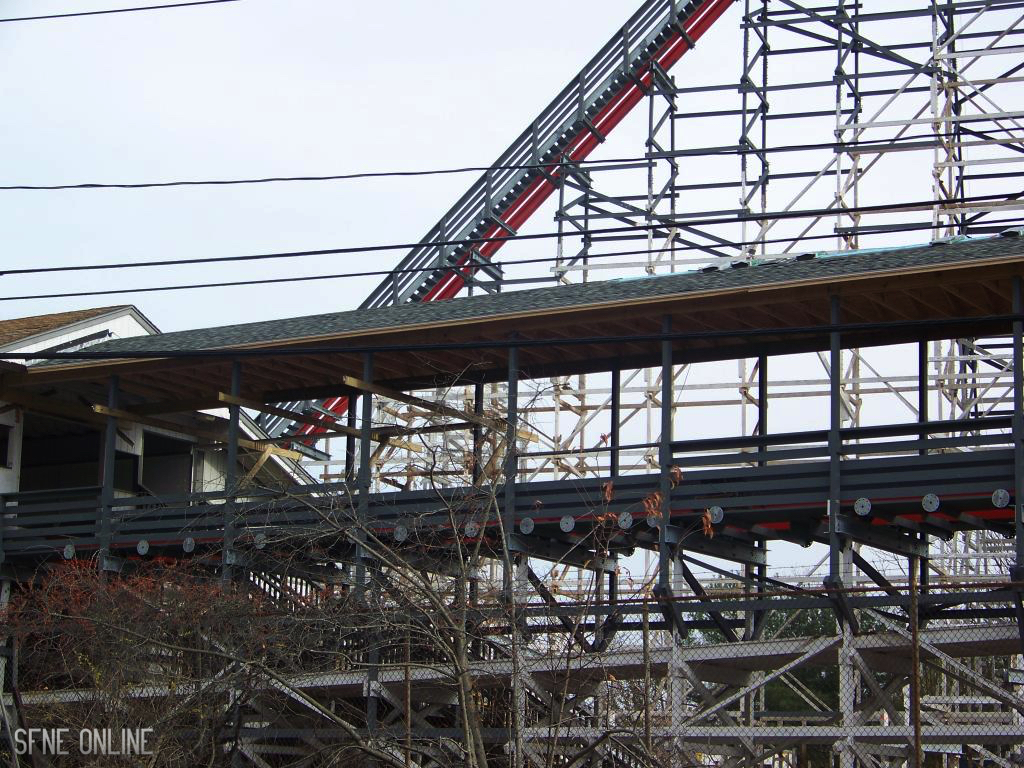 I have a feeling that this will become somewhat of a signature shot next year. Imagine seeing a Wicked Cyclone train go down the first drop and New England SkyScreamer swinging at the top! 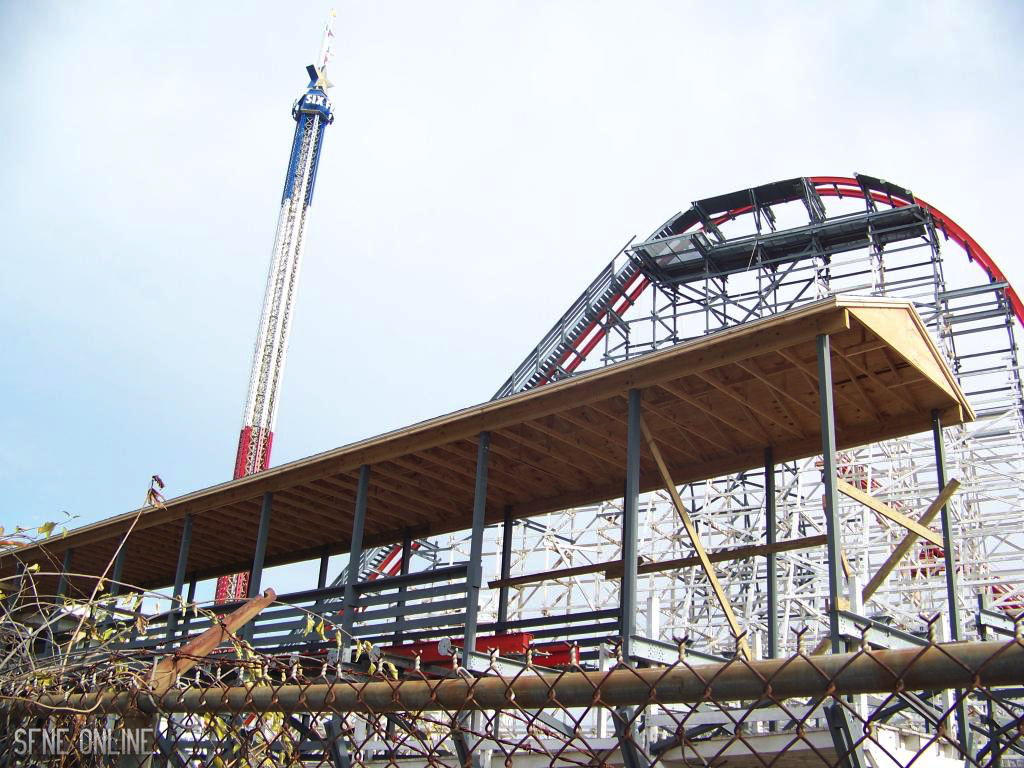 One last shot of the now completed brake run roof: 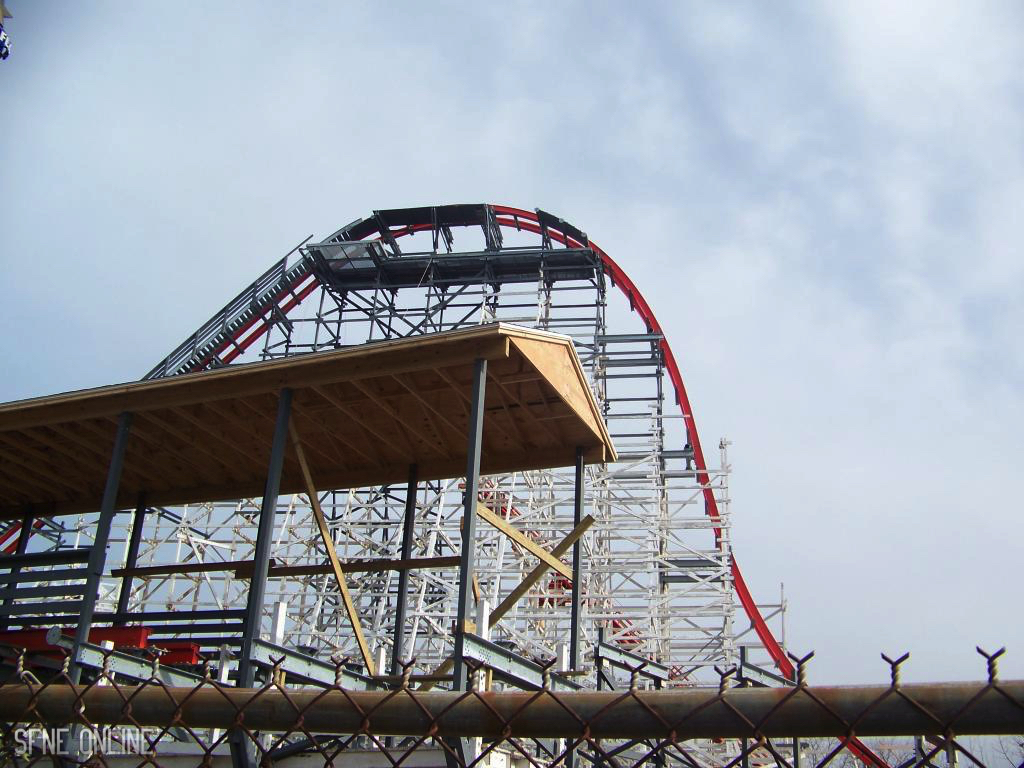 The overbanked turn has been completed as well: 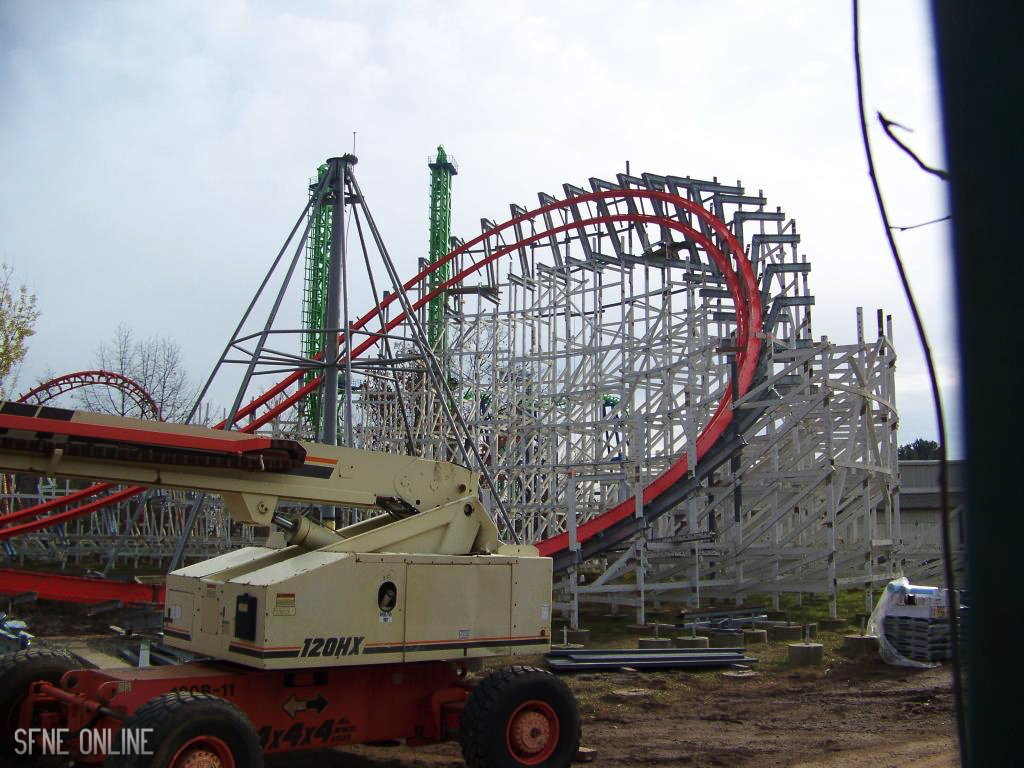 Doesn’t it look pretty wicked? Since our last update we have been told that the support tower will indeed be staying to support Wicked Cyclone. It will be pretty interesting to see how that works… 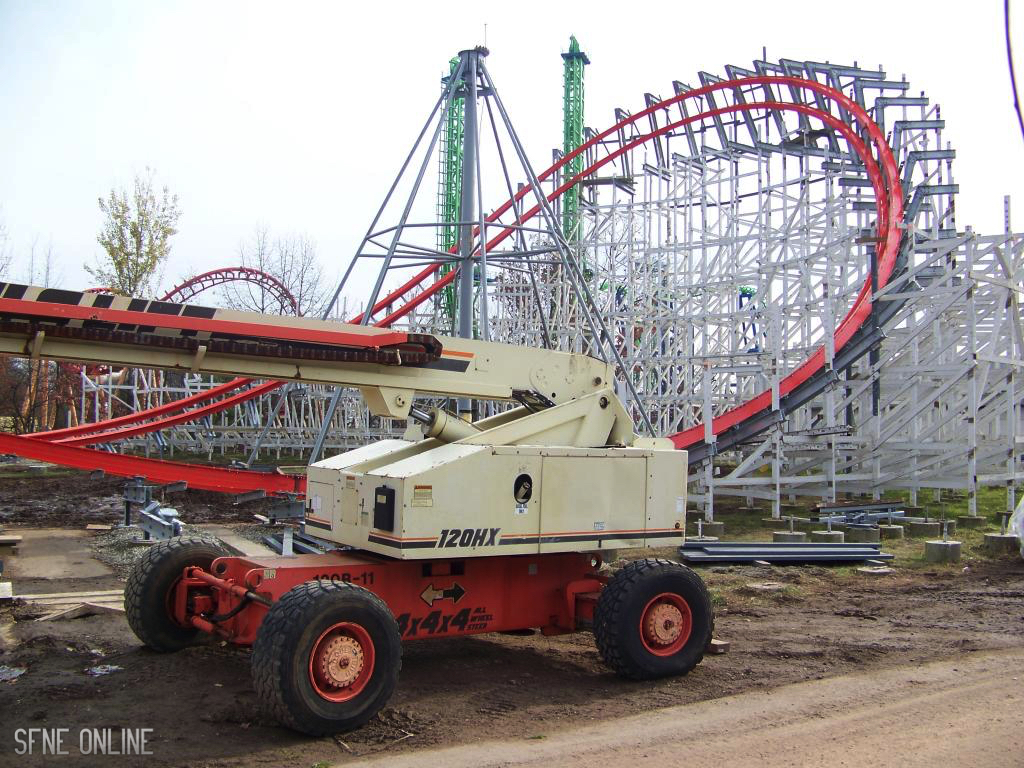 The track exiting the overbanked turn has also been installed. 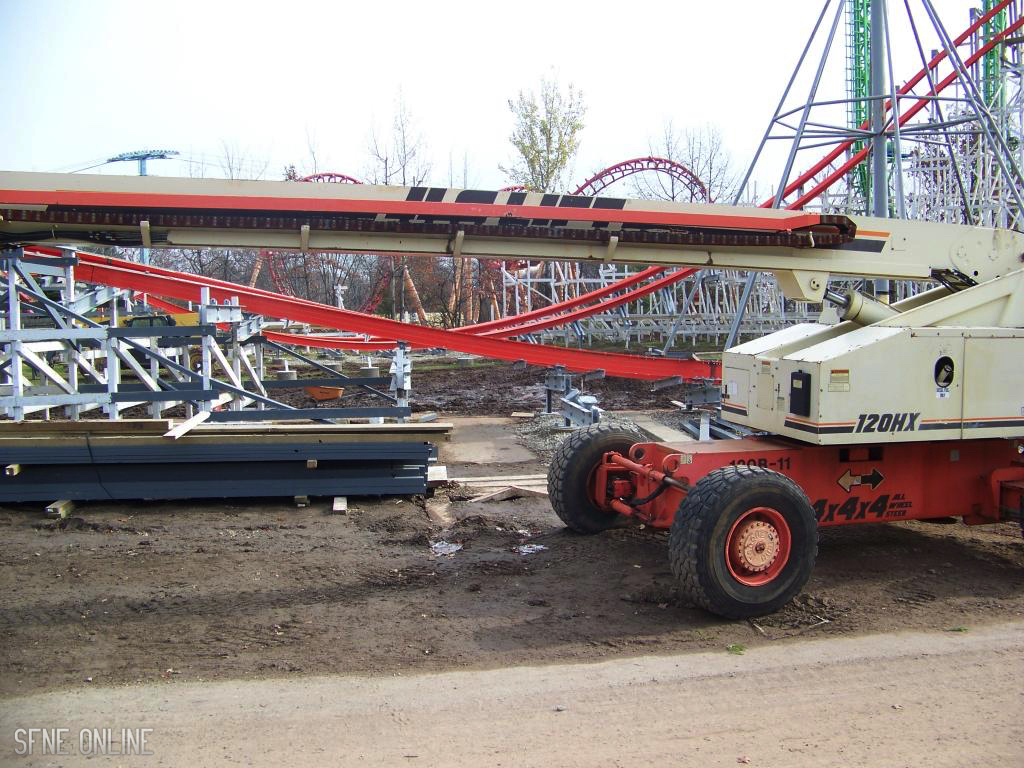 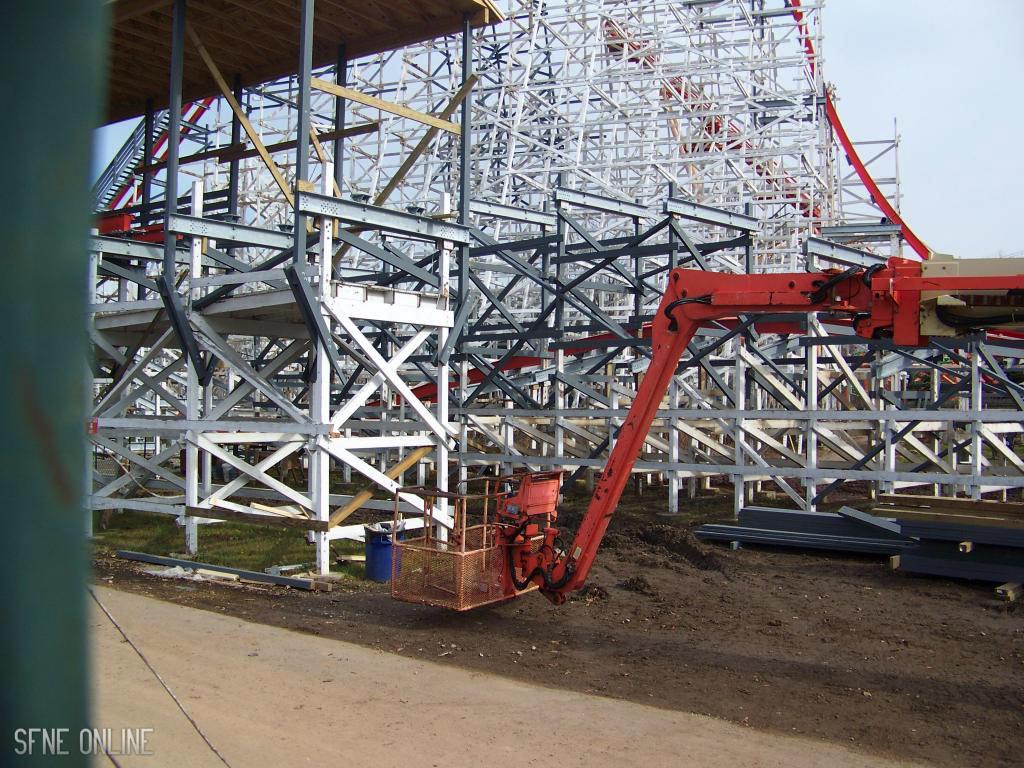 You can see it a bit better here: 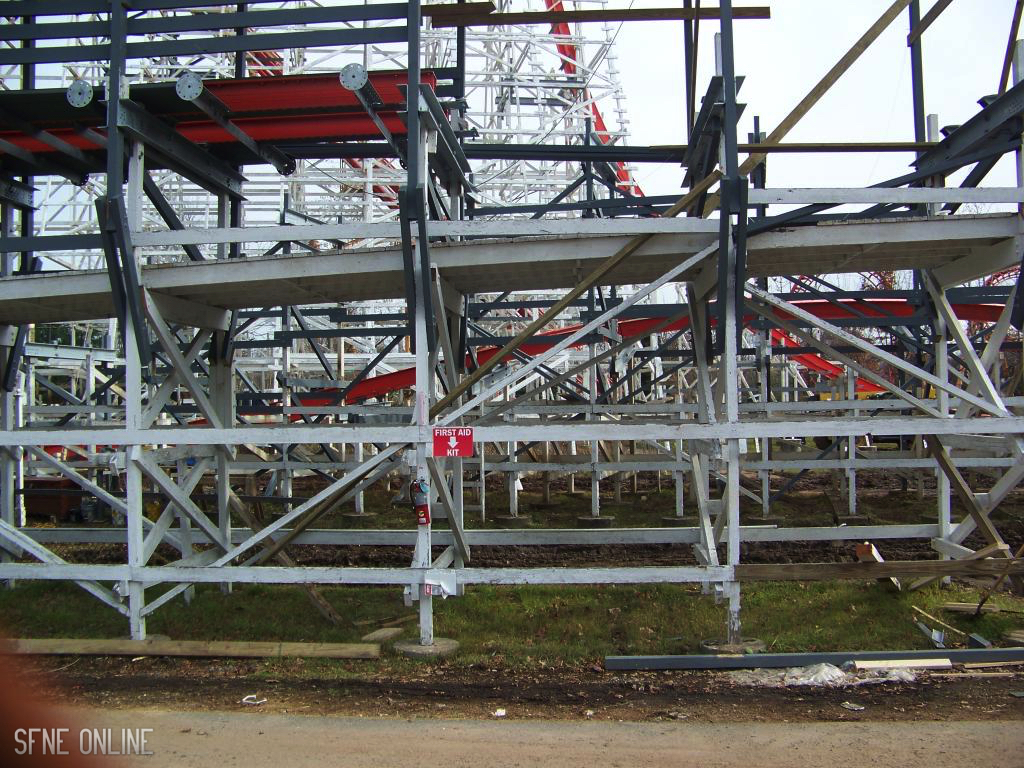 It’s tough to see, but crossbeams have been installed going up the hill into the 200-degree stall. 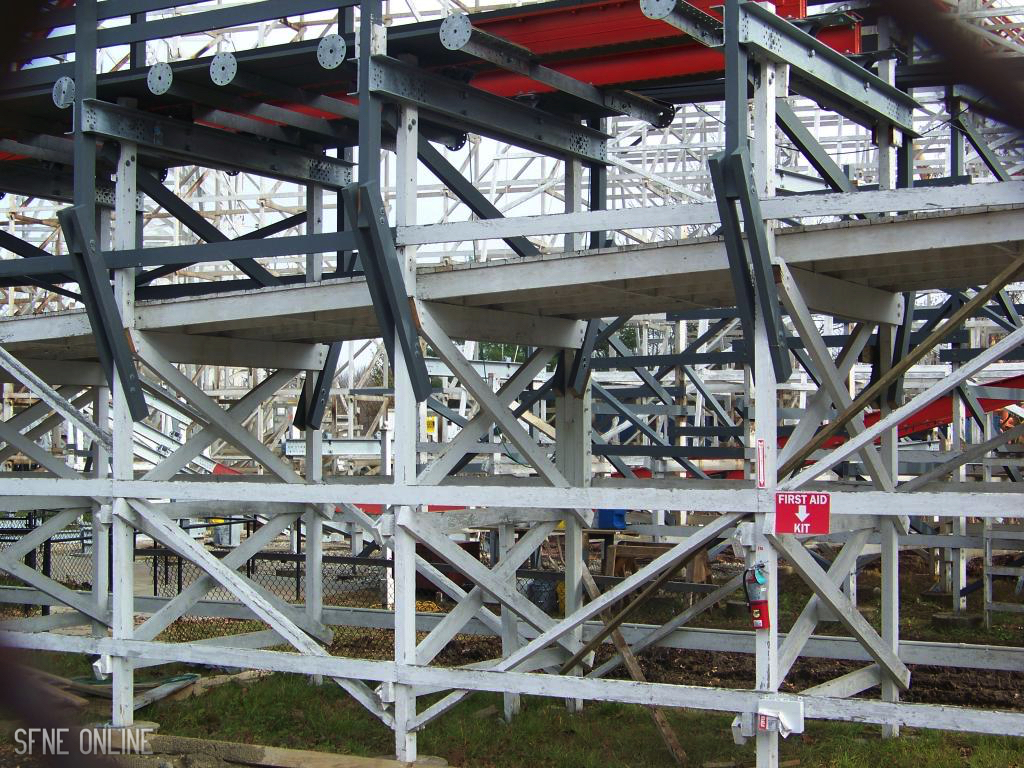 This is a better angle: 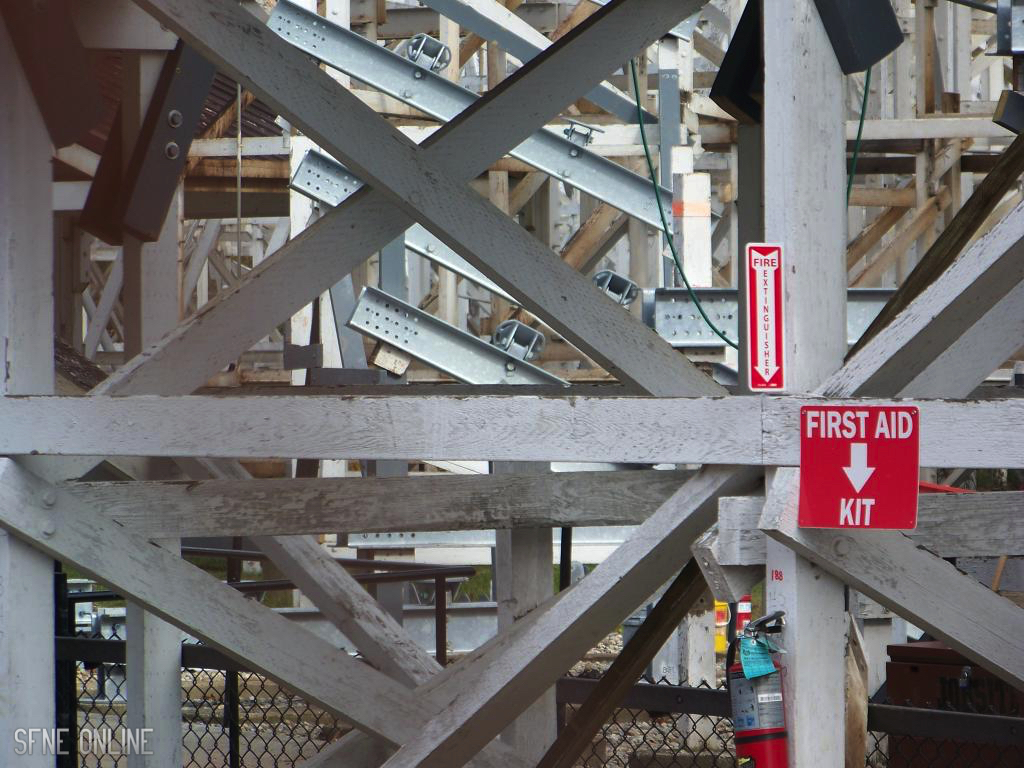 Even more wood is on site: 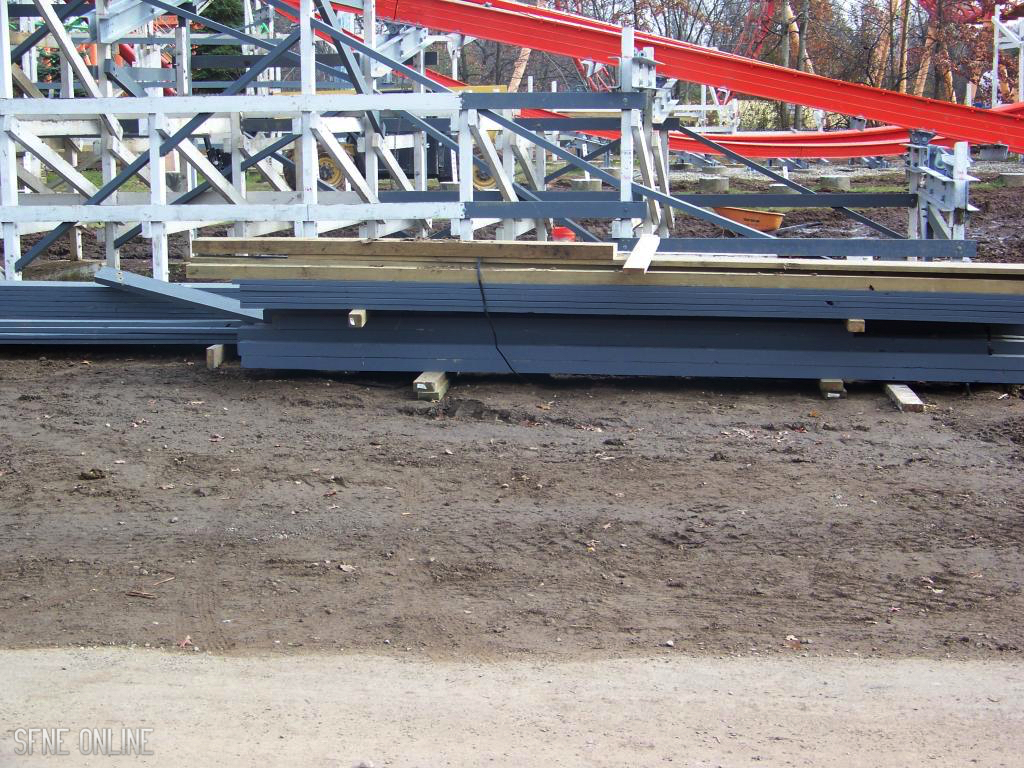 Now here’s where the most work was done these past two weeks. The remaining Cyclone track was taken down. The crossbeams for the double down are now in place. 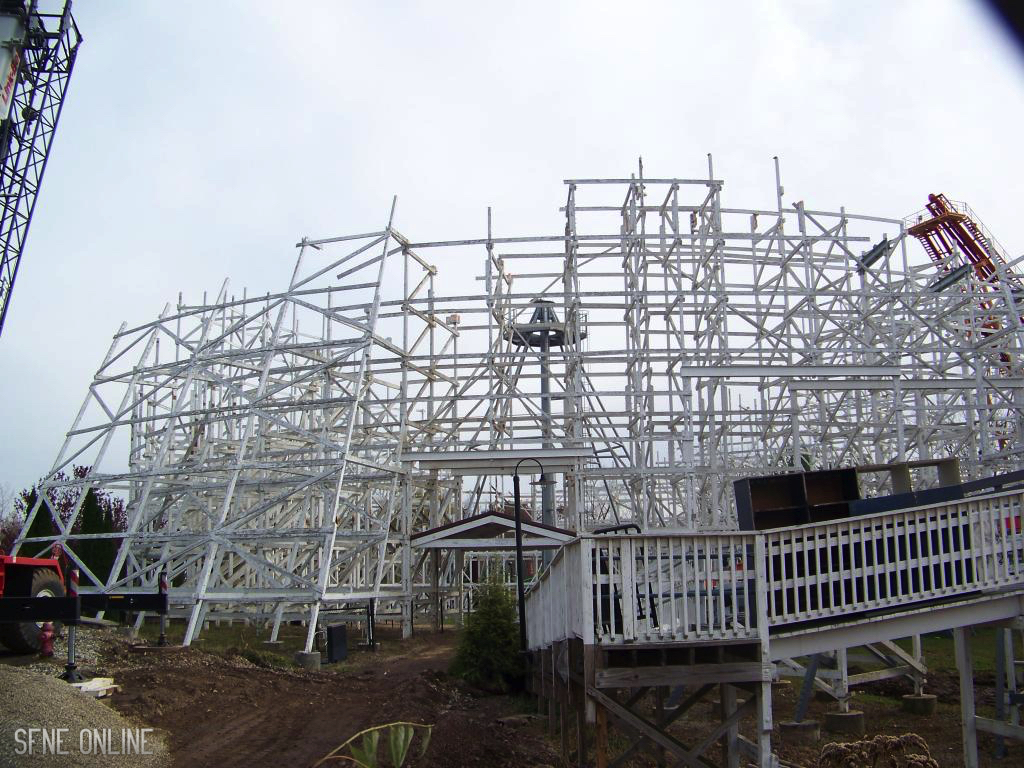 You can see the outline of where the track will follow. 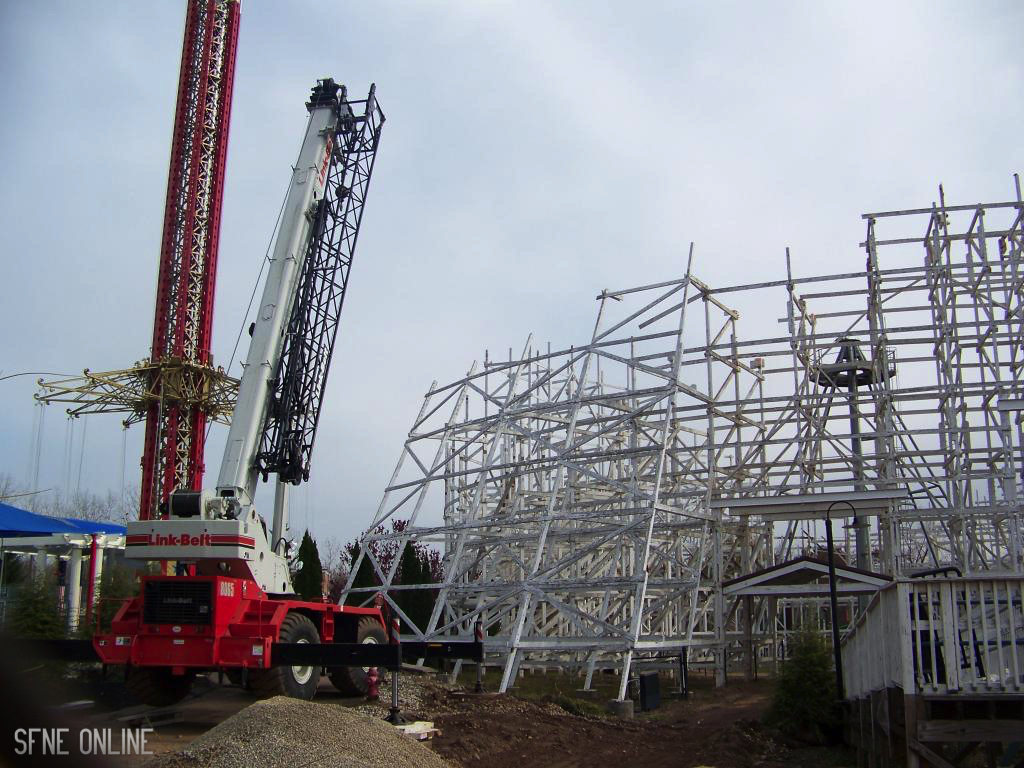 Definitely a lot different than what it’s been like for the last thirty one years! 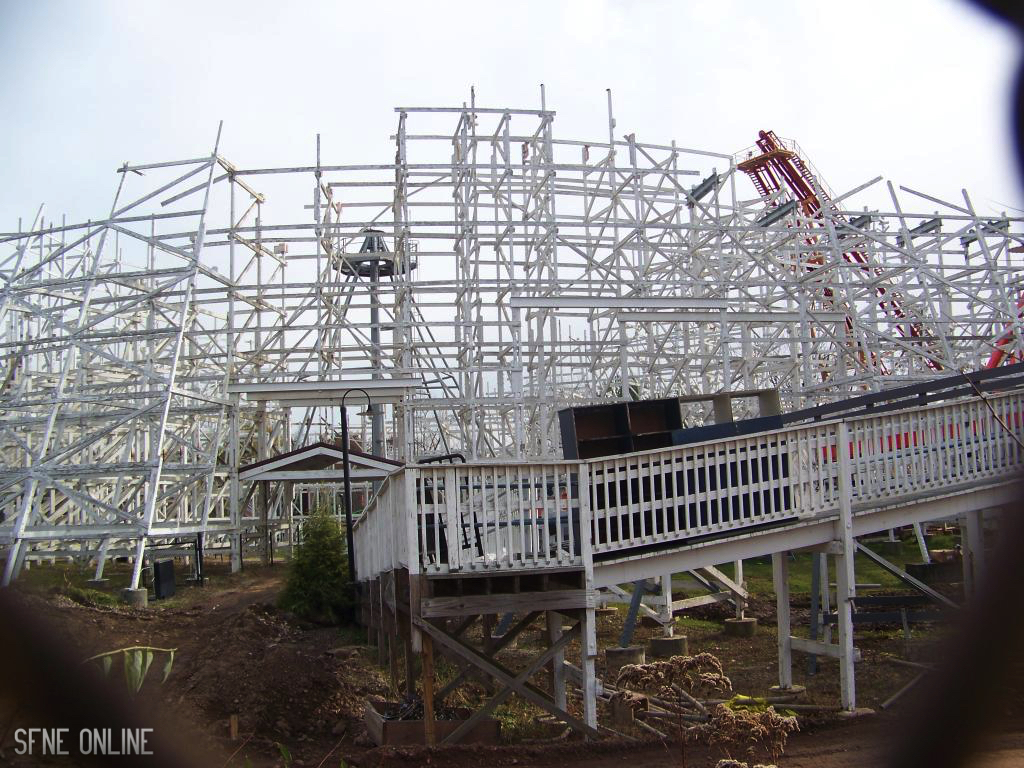 That does it for this update. In between our last Wicked Cyclone update and this one, we posted a ton of construction pictures on our Facebook and Twitter pages. So if you can’t wait two weeks to see the next update, be sure to follow us on our social media sites!