The Iron Cyclone rumors have been going on for months now. Let’s talk about them. 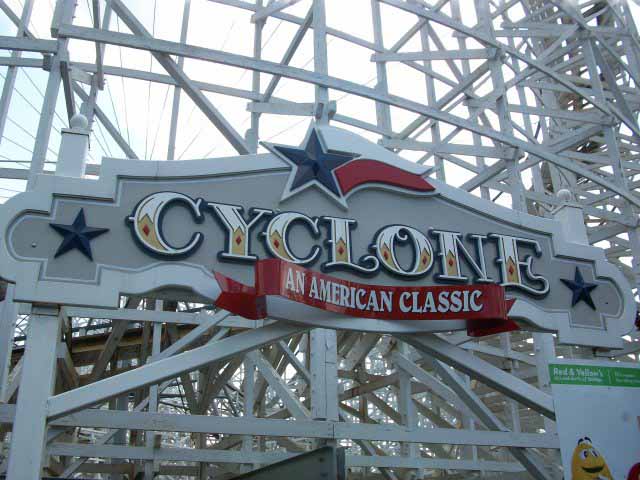 This rumor is true! Click here to learn about the all new Wicked Cyclone – coming to Six Flags New England in 2015!

Before we get into the Iron Cyclone rumors everyone should watch this interview with Six Flags New England’s Communications Manager, Jennifer McGrath. Pay close attention to the answer to the question at 48 seconds in.

In case you didn’t catch that, she said that next years attraction will knock everyone’s socks off. Keep that in the back of your mind as you read this post. Now let’s get to all of the rumors.

Summary of everything we know so far:

Now that we’ve summed up everything we know up to this point, let’s look at each subject in more depth…

A history of rumors:

Every year it seems like immediately after the new capital for one year is announced, rumors for the year after start. Once New England SkyScreamer was announced, history indeed repeated itself. In the weeks after the announcement our sources informed us that we should expect to see Six Flags New England’s next project be from Rocky Mountain Construction. For those of you not familiar with the name, Rocky Mountain Construction, or RMC, is the group of people behind New Texas Giant, Outlaw Run and Iron Rattler. Right now they are finishing up work on Six Flags Great America’s Goliath and Six Flags Mexico’s Medusa Steel Coaster. The rendering below is of Goliath at Six Flags Great America. At the Superhero Celebration event put on by American Coaster Enthusiasts (ACE) and Six Flags New England, the park president, John Winkler, mentioned that the park would see two new coasters within the next few years. The four year count would start in 2015. Since we were told to expect something from RMC we thought for sure that 2015 would bring a new topper track wooden roller coaster similar to Outlaw Run and Goliath. We didn’t think Cyclone getting the Iron Horse treatment (the same refurbishment seen on Texas Giant, Rattler, and Medusa) was even possible. In fact, at an ACE event a few years back, the park mentioned that they looked into doing the Iron Horse treatment to Cyclone but decided against it. All rumors went quiet for most of the winter until March. This is when the Iron Cyclone rumors started to appear out of nowhere. Things really heated up once the park opened for the season… 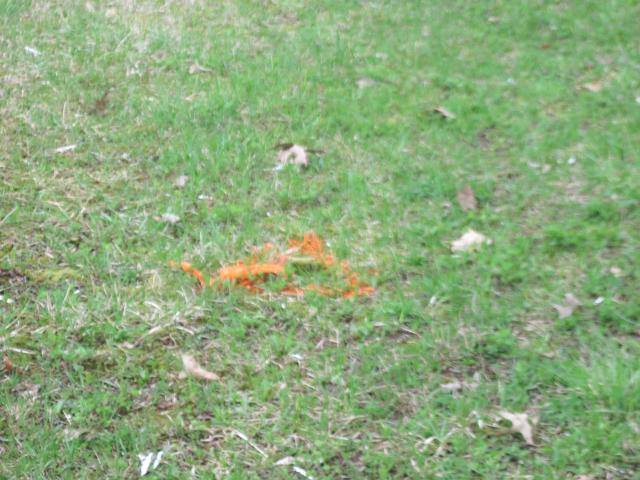 On opening day this year we immediately noticed orange markers around Cyclone’s layout. We even noticed some around the North End. We’re not sure if they have to do with what’s going on with Cyclone or not but they probably do. You don’t really see many when waiting in line, but when you ride the coaster you can see a lot of them. These next two pictures are of the markers you can see from the paths around the ride. 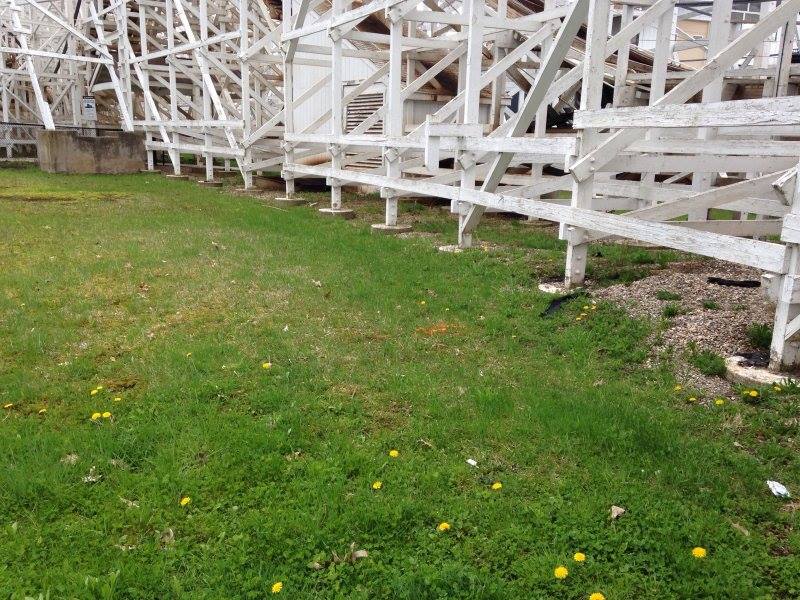 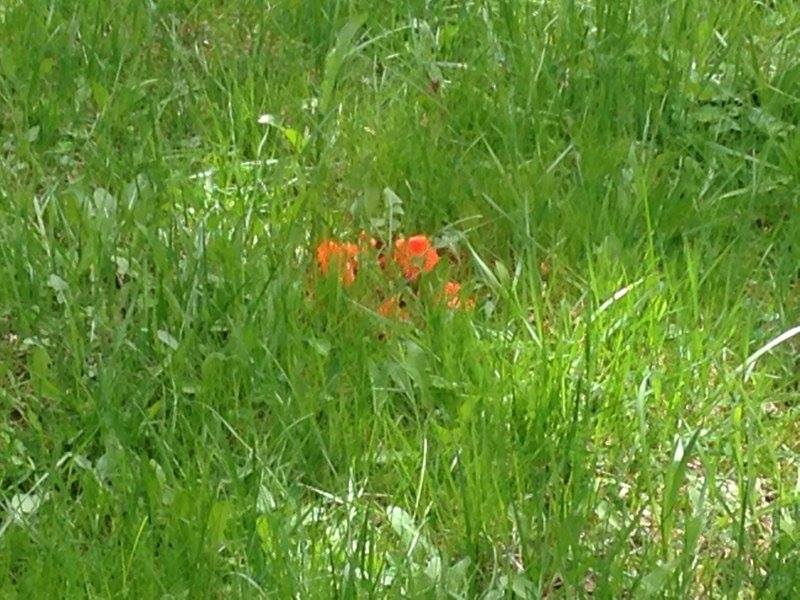 These are the most visible orange markers from the queue. There are also some visible ones on the fence near Flashback and on the trees. Once you ride, however, you can see a lot more. On the old entrance/exit paths there are a few triangular orange markers with dots in the middle. This usually symbolizes new footers for supports. The whole southern infield of Cyclone is marked up as well as the turn out of the station to the lift hill. When you are sitting on the brake run you can get a good look at all of them.

In addition to the orange markers there are some things written on the supports that you have to pay attention to closely. Huge thank you to Dennis for pointing out all of these and taking the pictures. 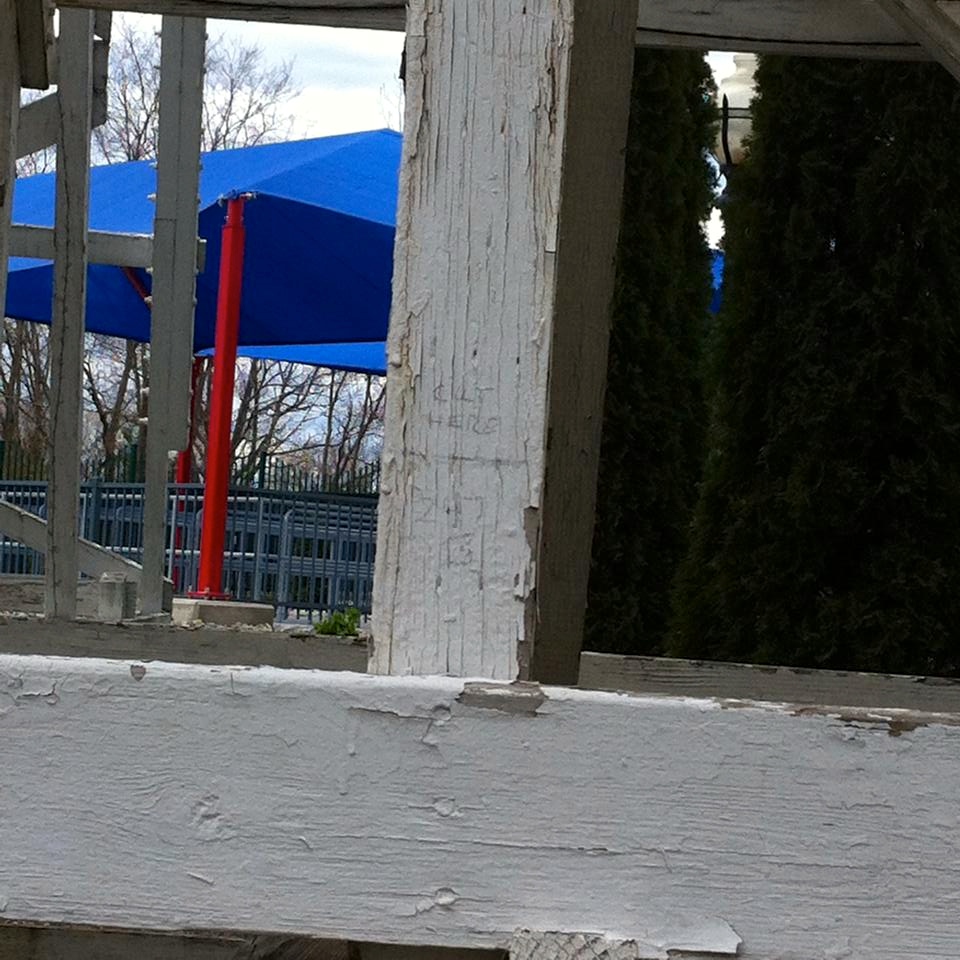 If you can’t make this out, it says “Cut here” with a number below it. These are on most of the supports near the entrance to Cyclone. Based off of Dennis’ knowledge, this whole helix is slated to be lowered to about 6 feet based on the cut marks. He estimates that there are about 250 + cut here markings based off of the number in the above picture. They circle the whole entrance area. Even the lift hill has some markings on it.

This next picture is a little hard to make out. If you look closely you can see the number 7.5 with a line next to it. This is exactly 7.5 feet up on the second drop supports – about 20 feet in. This indicates potentially a steeper drop on the second hill.

The following pictures were taken this past weekend. While at media day for New England SkyScreamer on Thursday, I didn’t notice any of this. I’m usually pretty observant so I have to say this must’ve been done on Friday. The colors are definitely new but I could’ve missed this. 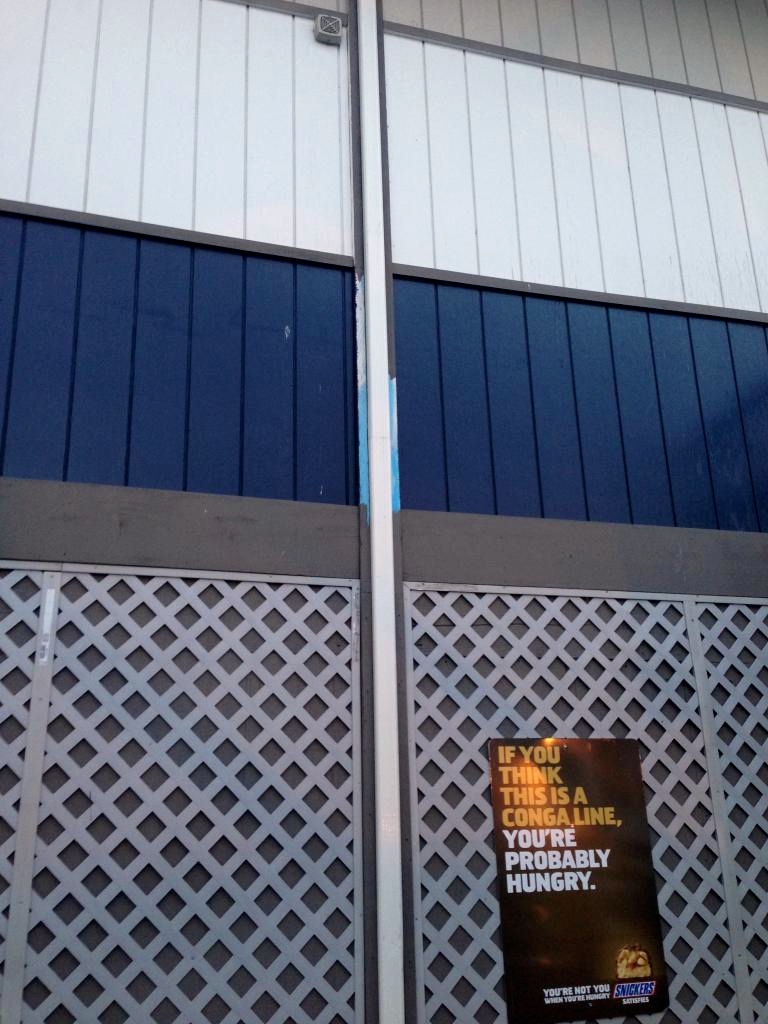 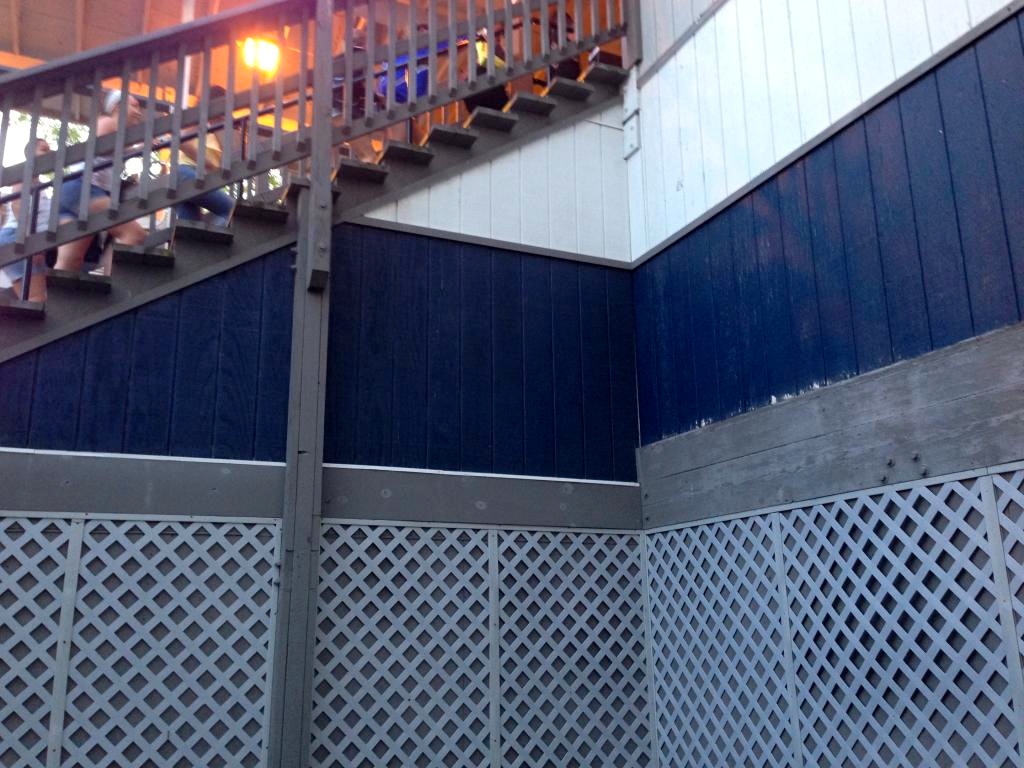 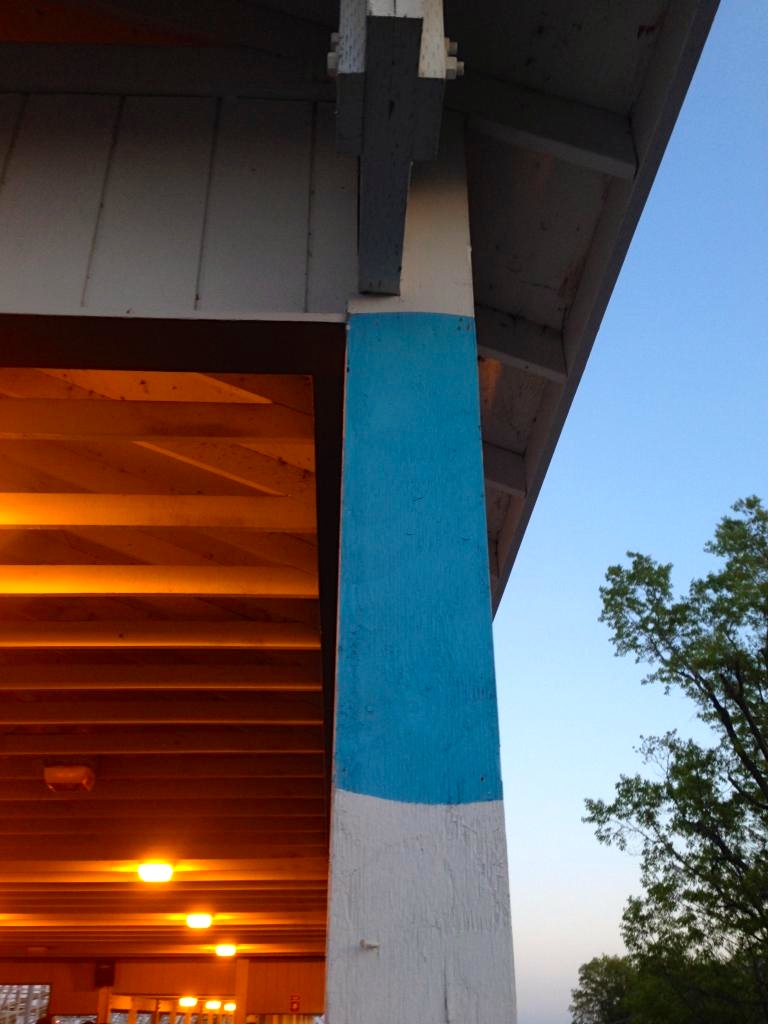 Picture credit to koasterkid on our forum.

We have no idea why they would be painting patches of Cyclone’s station now. Are they testing potential colors? Are they just trying to throw people off? Who knows.

One last small thing we want to mention… Has anyone looked closely at the 2014 park map? If you have a 2014 map and a 2013 map nearby compare Cyclone’s station. If you don’t have one, look at this screenshot. Yep. The park put the ACE logo on Cyclone’s station for some reason. If you have a 2013 map you will notice that it’s not there. This could simply mean nothing. Or it could be a hint to enthusiasts that they should be getting their last rides on Cyclone this year. We’ve looked closely at the map and this is the only place where the ACE logo appears. It’s also placed perfectly on the station. So I doubt it is a mistake.

To wrap things up… There are a total of about 13 visible orange markers along the ride and a lot more written on the supports. Coupled with the rumors we’ve been hearing for months now all of this points to one thing… Cyclone is being transformed. We don’t know if it’s Iron Horse or regular topper track. Heck, the park could be totally messing with us as far as we know. Either way, you guys should get your last rides in just in case. We will keep you guys updated as more things start to happen. 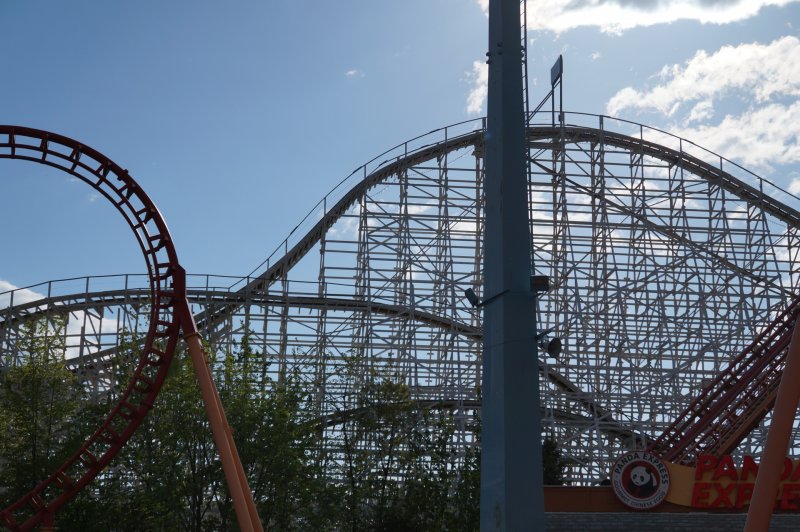 What do you think is going on with Cyclone? Do you think our assumptions are wrong? Let us know in the comments.

[wp_ad_camp_1]
Disclaimer: This post was pure speculation based off of public information. We have no knowledge if anything mentioned in this post is actually happening or not. We are not affiliated with Six Flags New England or any other amusement park.