After operating for 31 years, Cyclone at Six Flags New England is closing on July 20. 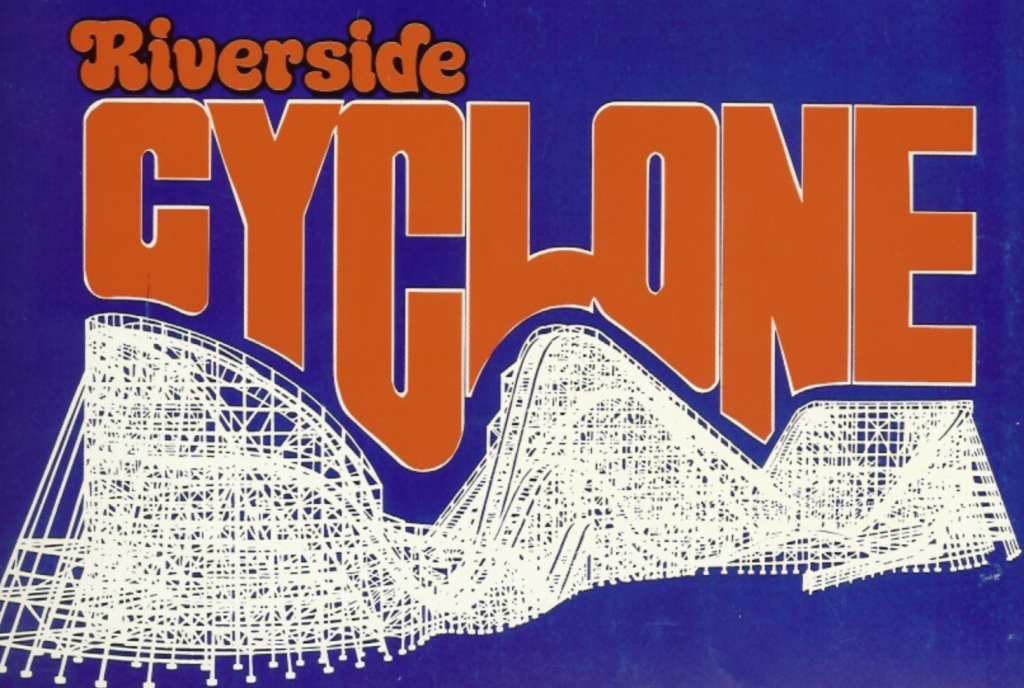 Cyclone opened exactly 31 years ago on June 24, 1983. The wild and intense ride has been adored for decades during the days of Riverside and Six Flags. New England coaster lovers know their credits haven’t been completed without the mind-blowing, vicious ride. Soon, it will be a blur in our memories.

A Brief History of Cyclone:

In 1982, Riverside wanted to create a new wooden coaster. They wanted to build a ride called “Cyclone.” When Riverside originally created the ride, they wanted it to be a replica of the Coney Island Cyclone, the world famous coaster in New York. Due to a lack of space, the park had to figure out a way to fit a coaster in such a tight spot. The result is what we see today, one of most intense wooden coasters in New England; Cyclone.

The designer of the coaster was William Cobb and it was built by William Cobb and Associates. During the winter of 1982-83, construction crews worked tirelessly building this monstrous $2.5 million attraction. Once opening day came around, riders waited many hours to ride the new coaster. It was said to be the “Most intense, brutal ride in the world.” 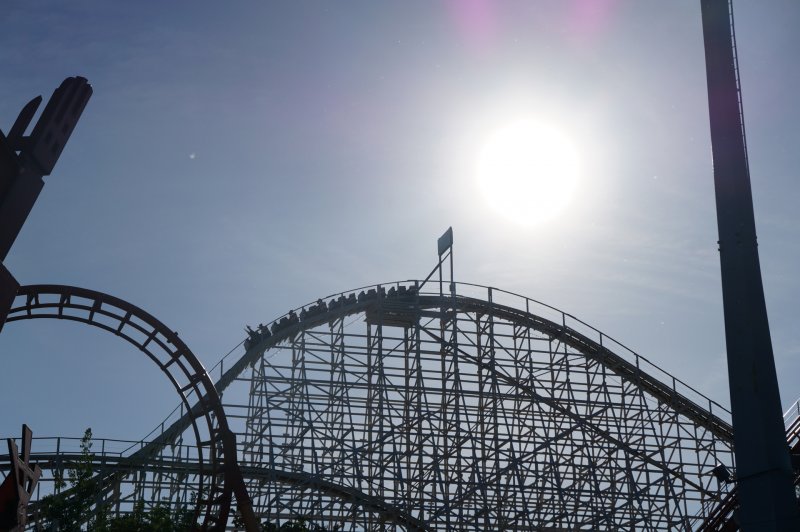 Cyclone gained a reputation of being very violent pretty early on in its history. There were a lot of issues with the original PTC trains that the coaster used. So for the 1985 season, the park added Morgan trains. The Morgans had mixed reviews. Some people liked them, some strongly hated them. They needed 17 people (I believe) per ride to run the ride because it would fail to make it through the layout otherwise. Here’s a picture of the cool looking Morgan trains. Credit to Joe Schwartz. 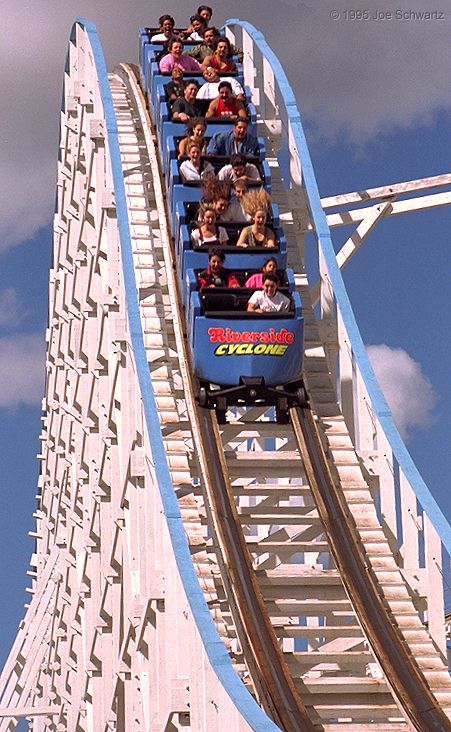 When Six Flags took over the park in 2000 a lot of changes were made to tame the coaster. The Morgan trains were removed and new PTC’s were added to the ride. These are the ones that are currently in use. They changed the name from Riverside Cyclone to simply Cyclone. The also shortened the first drop by 20 feet and added trim brakes in the second half of the ride. Both of these changes killed the speed and pacing of the ride. You can see the original first drop in the two pictures below. It’s the bottom-most track you see in the pictures. What a difference, right? 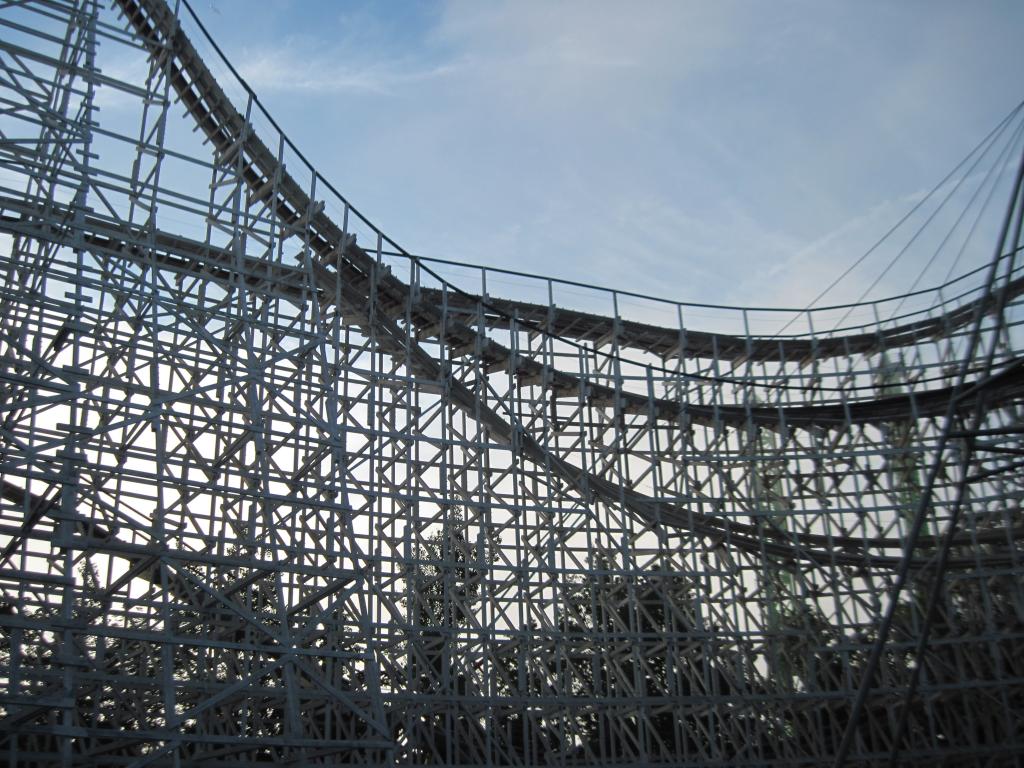 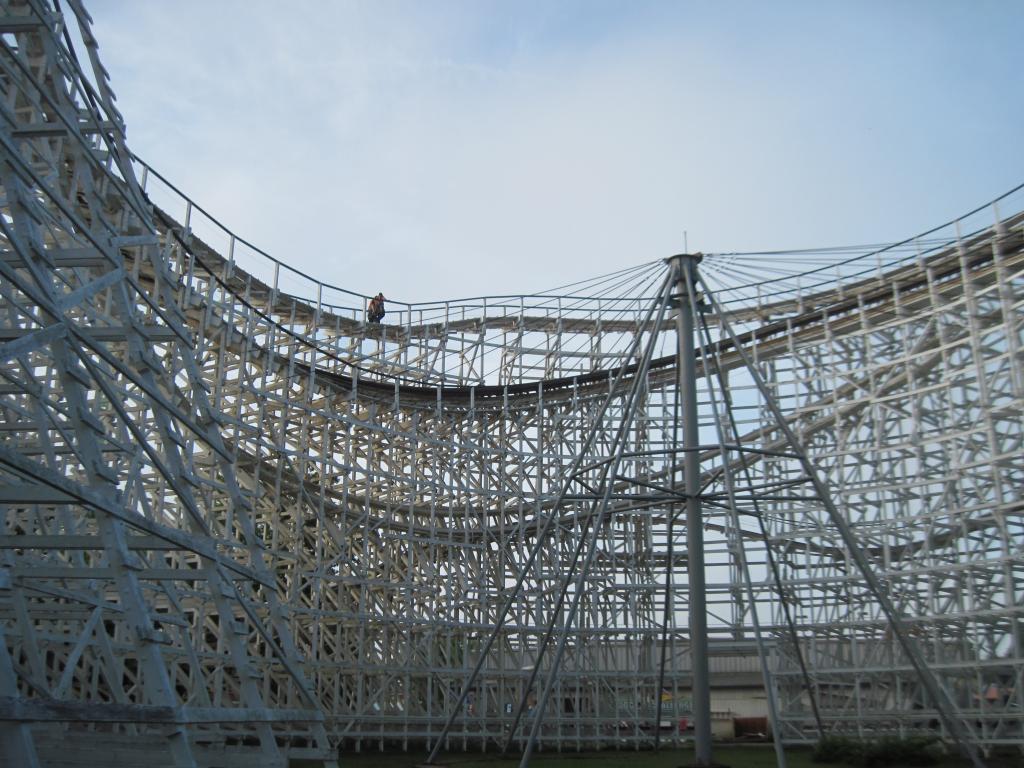 The ride was still great even after all the changes but due to a lack of maintenance the coaster became unbearably rough. As the coaster aged things just became worse. Popularity of the ride decreased as bigger and better additions were added to the park. Six Flags as a whole seems to be realizing that the cost of maintaining these old wooden coasters isn’t worth it, especially since the coasters aren’t as popular. To date, three Six Flags coasters have received a steel track refurbishment, making them a hybrid coaster.

At the beginning of the season, many members of our forum started noticing mysterious markings showing throughout Cyclone’s footprint. Many people have been speculating that Cyclone could be the next coaster on Six Flags’ list of coasters that need to be refurbished. We actually posted something about this rumor last month. I do want to point out that the announcement of Cyclone’s closure doesn’t mean it’s definitely getting refurbished. Last year we saw Rolling Thunder at Six Flags Great Adventure close forever.

Here is the press release announcing the closure:

Six Flags New England will be retiring the infamous wooden rollercoaster Cyclone on Sunday, July 20. Riders from throughout the region will want to visit the Thrill Capital of New England during the next few weeks to experience their last ride ever on this nostalgic coaster. For over three decades, Cyclone has thrilled, entertained and created memories for families and thrill seekers of all ages.

Cyclone opened at Six Flags New England on June 24, 1983 and has inspired generations of coaster lovers. The concept of the attraction was based off of a popular ride at Coney Island that provided high impact thrills in a small footprint. While the current frame is different than the old attraction, Cyclone at Six Flags New England quickly established its fan base and has remained a popular and beloved coaster over the last thirty years.

As one of the largest wooden coasters in the world, the amazing wooden architecture unfurls over 3,400 feet of track. As 24 thrill seekers board each Cyclone train, they quickly climb 109 feet to the top then plummet down at speeds of over 50 miles per hour. Riders also experience twist and turns around every corner as they face a variety of hills and weightlessness. Like any wooden coaster, the clicks and rattles from the frame only enhance the element of thrill riders face. Cyclone currently is one of the two wooden coasters housed at Six Flags New England.

“It is always difficult whenever we say goodbye to a classic attraction, especially one that is so beloved like the Cyclone,” said John Winkler, Six Flags New England’s Park President. “As the Thrill Capital of New England, we are always searching new ways to provide thrills and enhance our guests’ experience and sometimes retiring older attractions is part of the process. Our wheels are always turning as we think of new and innovative attractions to bring to the park in the future.”

We strongly suggest getting out to Six Flags New England sometime in the next month to get your last rides on Cyclone. There will be ERT (exclusive ride time) on Cyclone for season pass holders the night it closes forever from 9 PM – 10 PM.