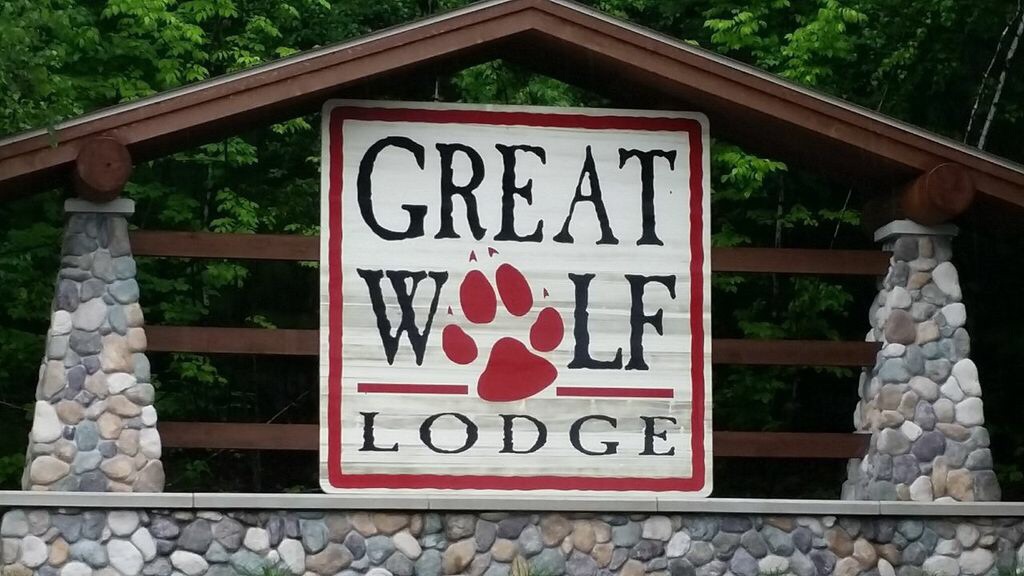 I arrived to the resort at around 9:30 AM with my two children in tow. We didn’t really know what to expect. When we walked through the door, we were greeted by two lovely and enthusiastic women who worked there, complete with wolf ears. As we approached them they handed the three of us a set of wolf ears. We then headed over to the media check check in table, told them who I was and then they gave us this awesome bag with some goodies inside! 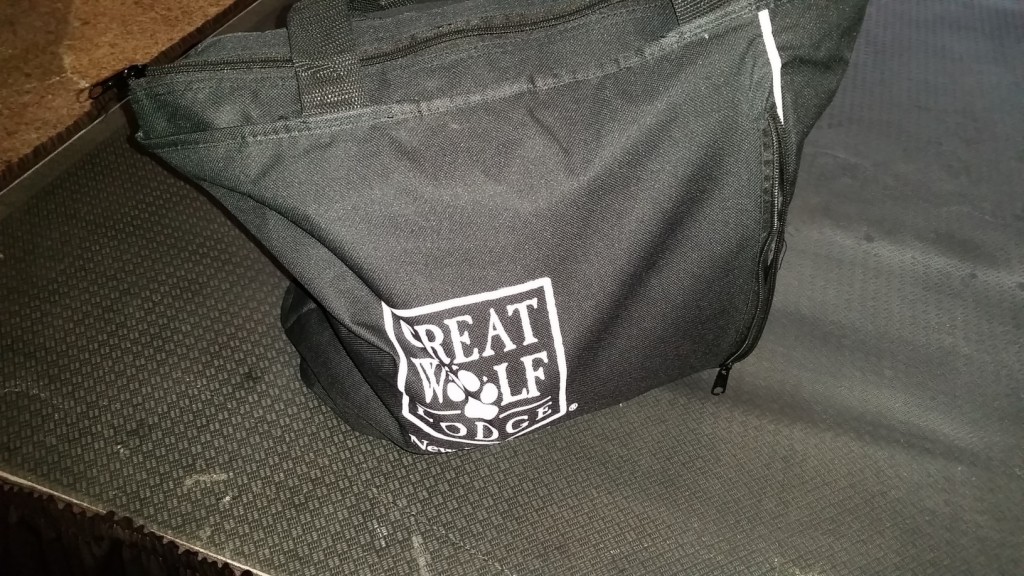 They also told us about the upcoming events for the day and said that the water park was open for our enjoyment. We walked around and headed towards the water park. Along the way we found many fun things to check out! Placed along the path to the water park were gift shops, an arcade, and restaurants. We stopped by MagiQuest, which is an interactive game that you can play, just like 벳엔드. To play the game you have to buy a wand and the game you want to play from the MagiQuest both. This enables you to play the game with the interactive spots around the Lodge. It’s a nice thing to do if you’re spending a couple of days at the Great Wolf Lodge. 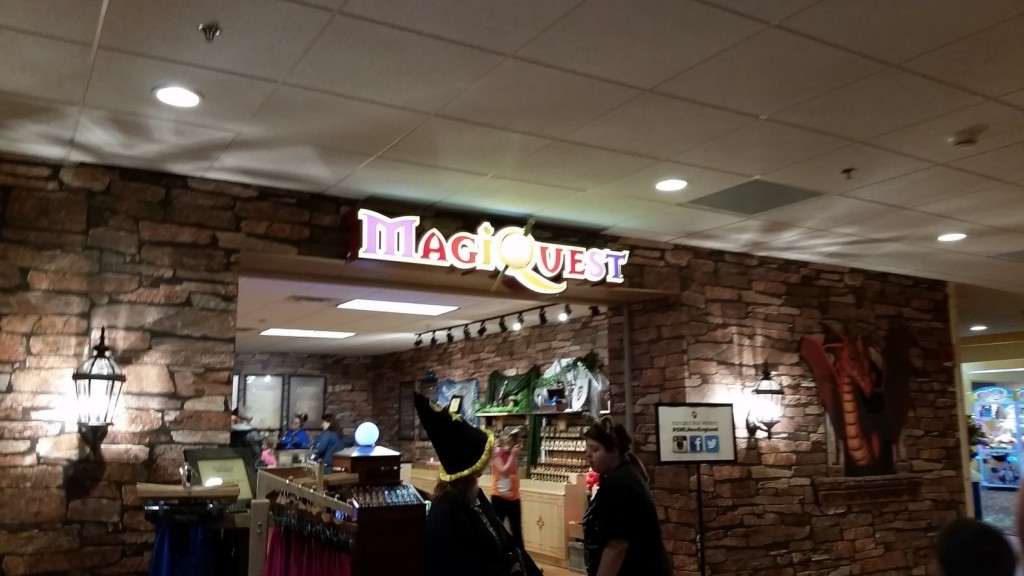 The arcade is filled with several types of games. There is a ticket redemption center with a lot of great prizes. Towards the back of the arcade were two restaurants. They sold sweets and pizza. 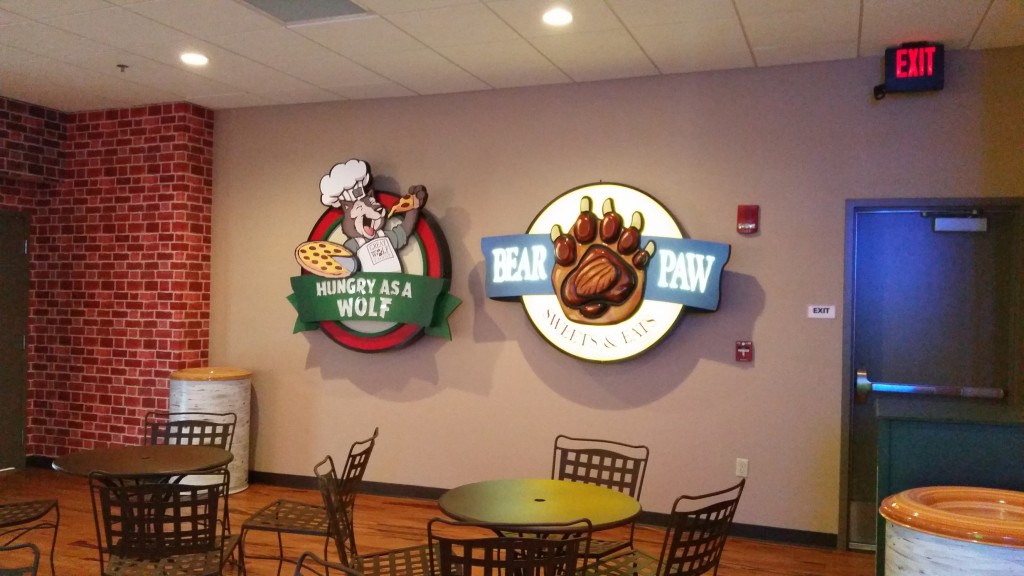 Something we didn’t do was the children’s spa. My kids did not want to get a manicure and pedicure. Haha. From there we headed over to the water park. Once you get near the entrance to the water park someone will measures the kids and give them a proper colored wrist band so that there is no need to be measured at the entrance to each slide. That’s a nice and efficient way of doing things. Once my kids were measured we headed to the changing rooms.

While in the changing room I decided to go through the bag they gave me and inside was a ton of amazing stuff. I’ve never received so many cool items from a media day event before! Inside the bag were some coupons for a free large pizza, soda and salad for up to four people. We did use that. The meal came with a 2 liter bottle of soda and a gigantic salad along with the large pizza.

Also inside the bag was a coupon for one free item to color. The options were a t-shirt or pillow case. My kids opted for pillow case. 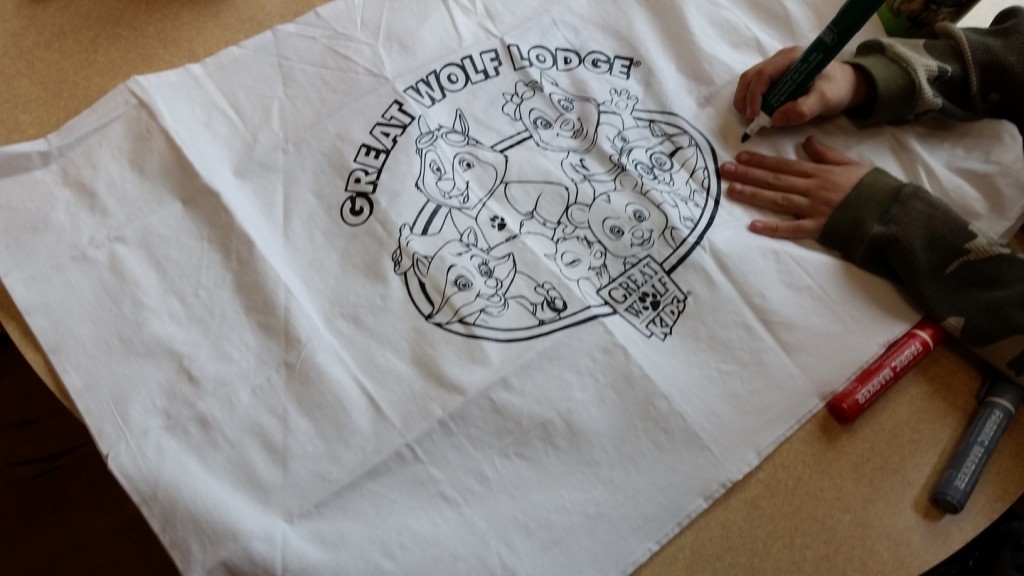 They also included a free refillable souvenir cup with the free drinks for the day. Along with that was charge card for the arcade that had ninety-six paw points on it, a towel and a water proof lanyard for cellphones. By the time we were done going through all the little goodies the Lodge gave us it was time for the opening ceremony in the main lobby. We planned on going back to the water park later.

While I watched the opening ceremony my kids went off to the side to color their blank pillow case. 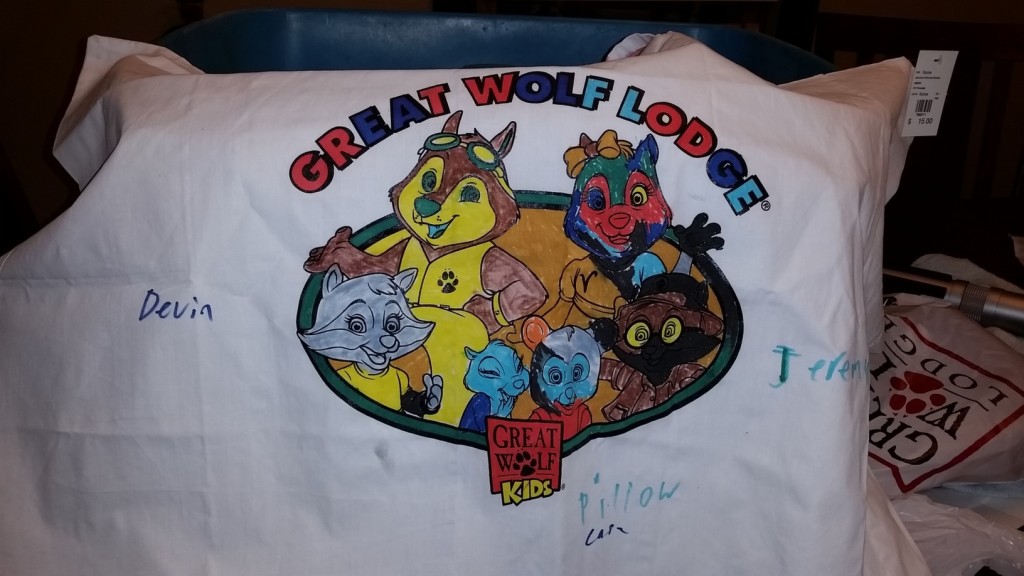 Here is a random picture of part of the main lobby. I like how much it really felt like we were in a real lodge. 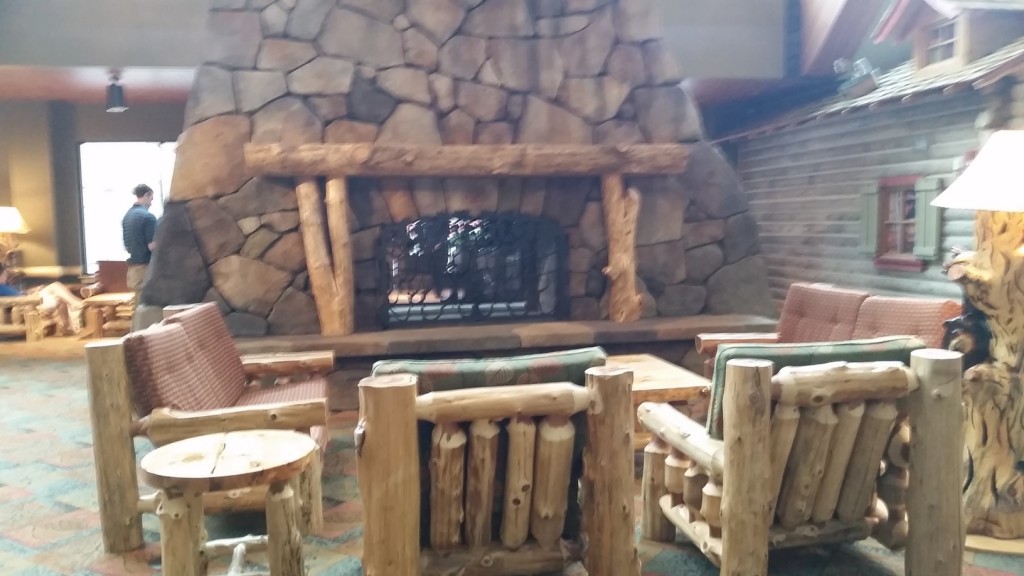 After several opening speeches, they officially opened Great Wolf Lodge with a howl. This is Kimberly Schaefer, CEO of Great Wolf Resorts: 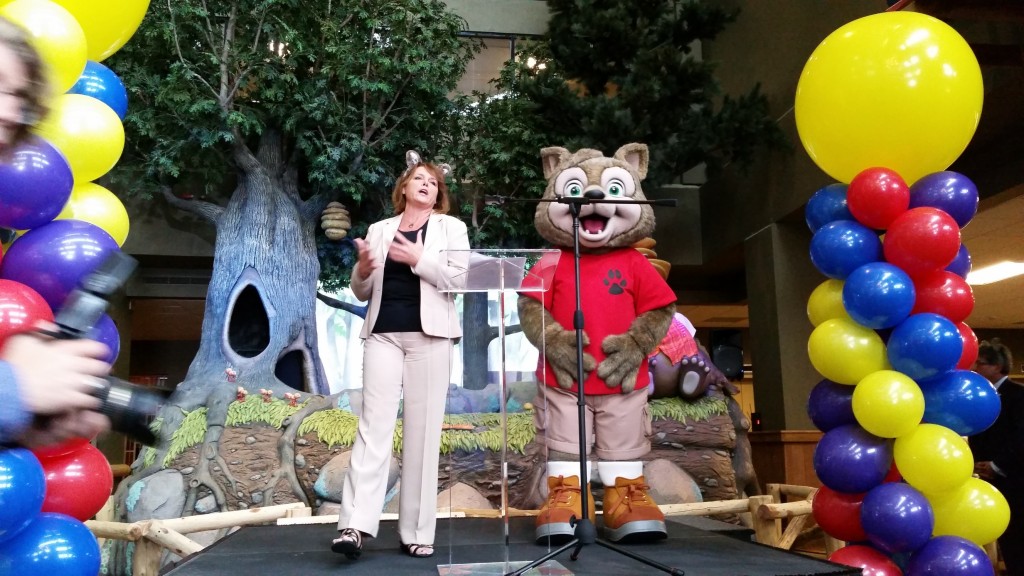 Following the ceremony was lunch. They had it set up in the conference center. When we sat down they had everything all set up beautifully with ice water and iced tea plus desserts already in place. Both of the desserts were placed in a shot glass looking cup. One of them was a s’more and the other was a berry dessert. Both were delicious. They had the salad already on the table. Then the main course came out. It consisted of chicken and mashed potatoes along with green vegetables. Everything was very well cooked and extremely delicious!

Once we finished eating it was finally time to ride some slides. There are two separate areas for the water park. One is more kid friendly than the other but both offer some great attractions for everyone. We headed over to the left side first. This side had a drop capsule slide called Wolf Tail, a ProSlide Tornado water slide called Howlin’ Tornado, and a raft slide called River Canyon Run. All three of the slides dispatched from the same tower. This side of the water park also included a wave pool and a kiddie play area that had some slides for the little ones. 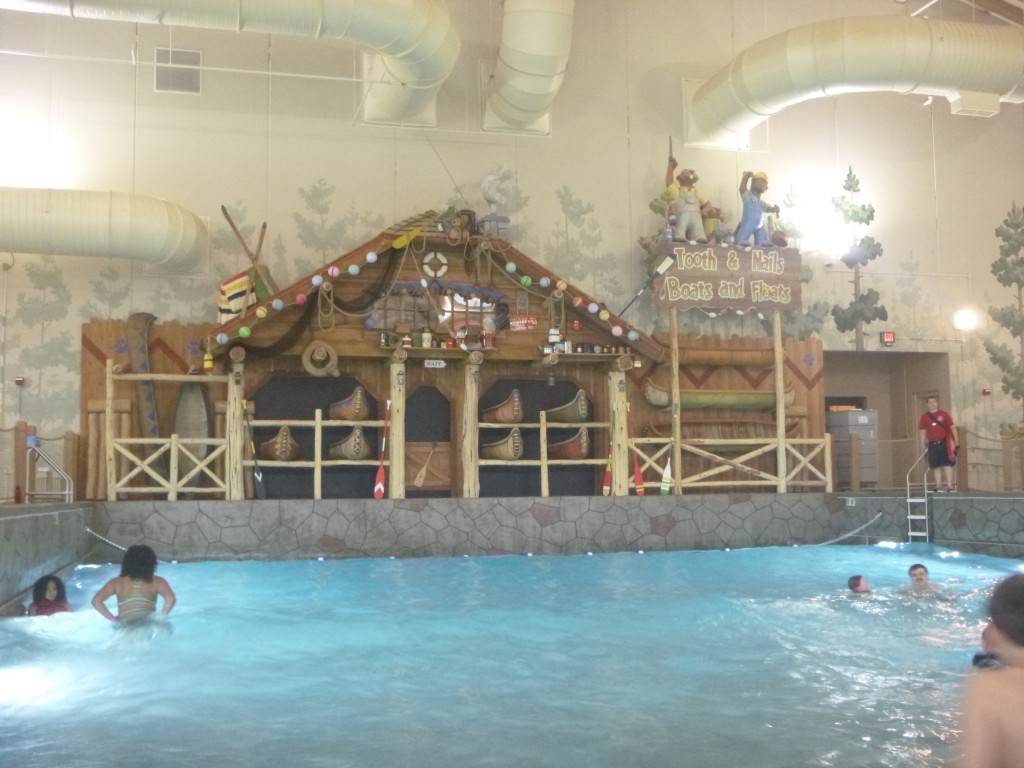 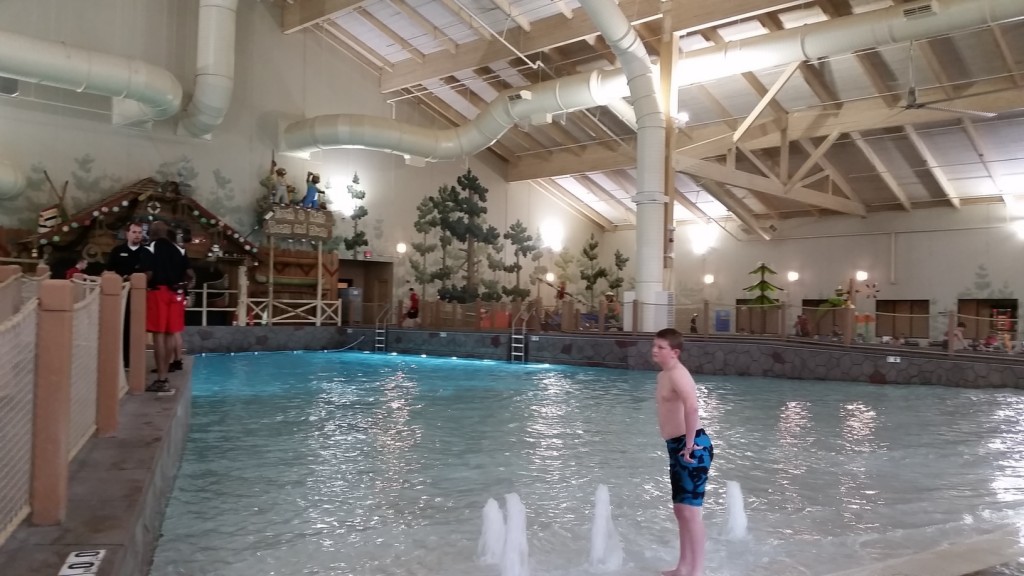 Inside the kids play pad they have many water features where you can shoot water at each other or go down smaller slides. I have to say, this small pool was a ton of fun. At its deepest, near the slides, it is only two feet deep. In other areas it was anywhere form a foot to a foot and half deep. Me and my children had a blast in it. I guess that’s just the kid in me! 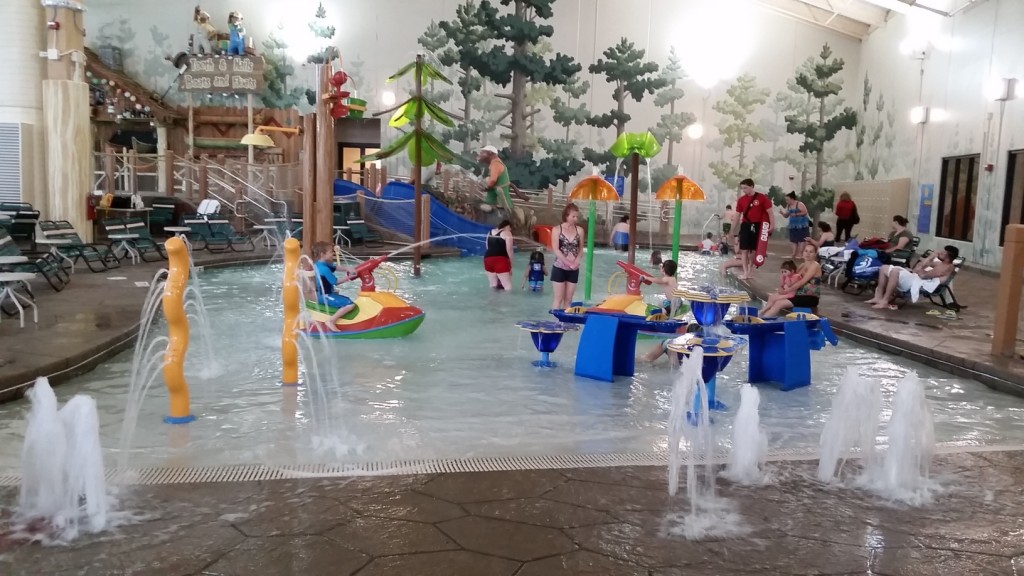 Now it was time to check out the big slides. We went on Howlin’ Tornado first. The thing I like about this ProSlide Tornado compared to the others I’ve been on is that this has more slide after hitting the bottom of the funnel. I would give it a 4 out of 5 stars. Even though it was smaller than some of the other ones I have been on it was still as intense. Very enjoyable and rerideable.

Next up was the River Canyon Run. This was another great slide as it twists, turns, and dips every which way. Both the kids and I really enjoyed it; 4 out of 5 stars.

I then went back up and rode the drop slide Wolf Tail. I was pleasantly surprised by how wild and fast this slide was. It was wicked fun, another 4 out 5 star slide!

One thing to mention is that these slides are outside of the building. Because of this the only place to really see the layout of each slide is by looking at them from the parking lot. This adds to the suspense, especially with the drop capsule slide! You can see the extended layout of the Tornado slide in this picture below. If you look closely you can also see the tubing for the drop capsule slide. 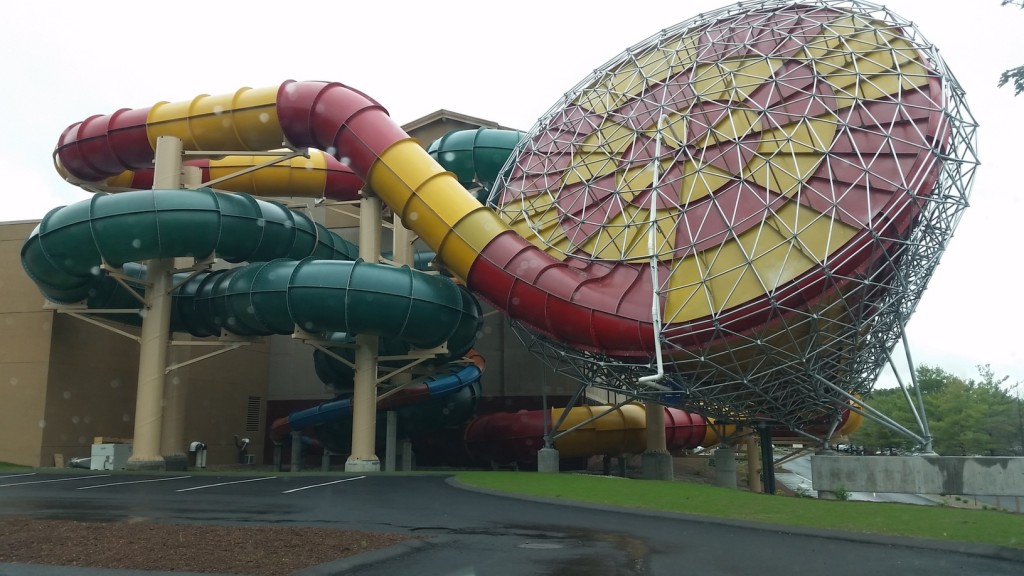 The only down side to these three slides was that there was only one lifeguard to dispatch all three slides.  I understand it was not that busy so maybe it’ll be different once the hotel books up. Though the neat thing it was that you don’t have to worry about carrying your tubes up into the slide tower. They have this conveyor system that brings them up. Once people get off their rafts at the bottom of the slide they get fed into the conveyor thing. It makes riding the slides that much more enjoyable! 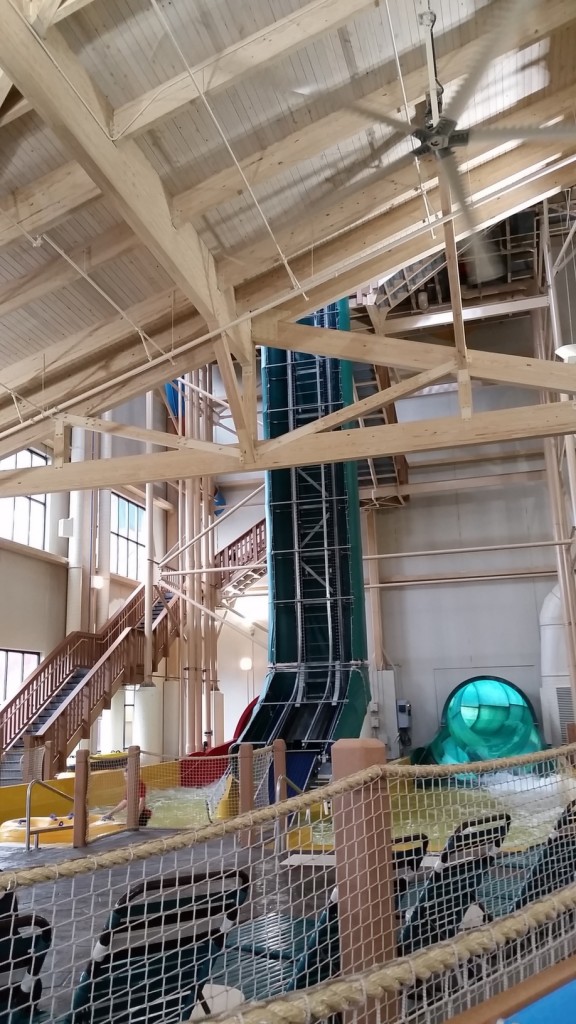 We then ventured across the hall to see what the other side of the water park had to offer. This side has a nice big play area complete with what every good water park play area has, the falling bucket of water. There were also more things to twist, turn and pull that would drop water everywhere! In addition there were a few slides for kids. I also took part in those, lol! This is also where the lazy river is located. There’s an area to play water basketball and a section of a pool where you hold onto a rope and try to walk across things floating in the water. Here are a bunch of pictures of everything I just mentioned. 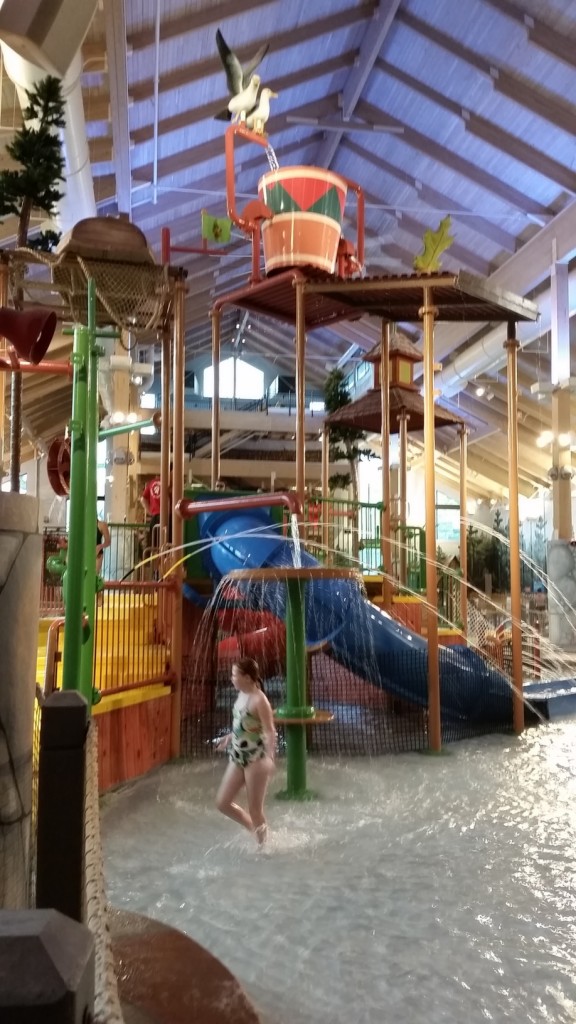 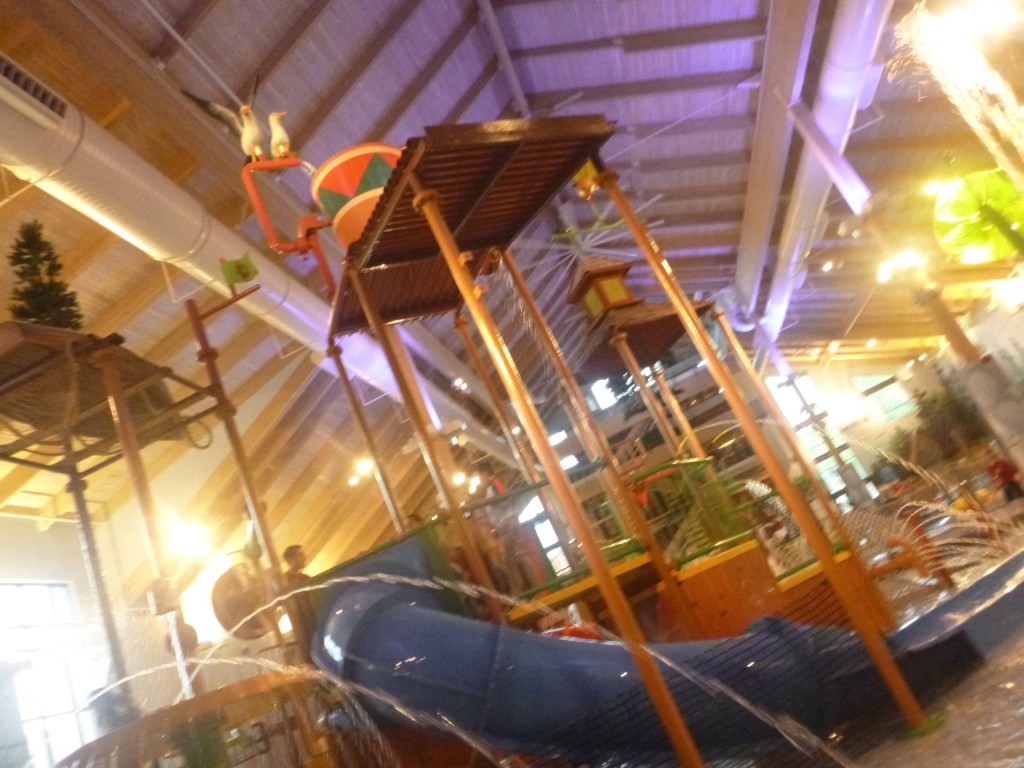 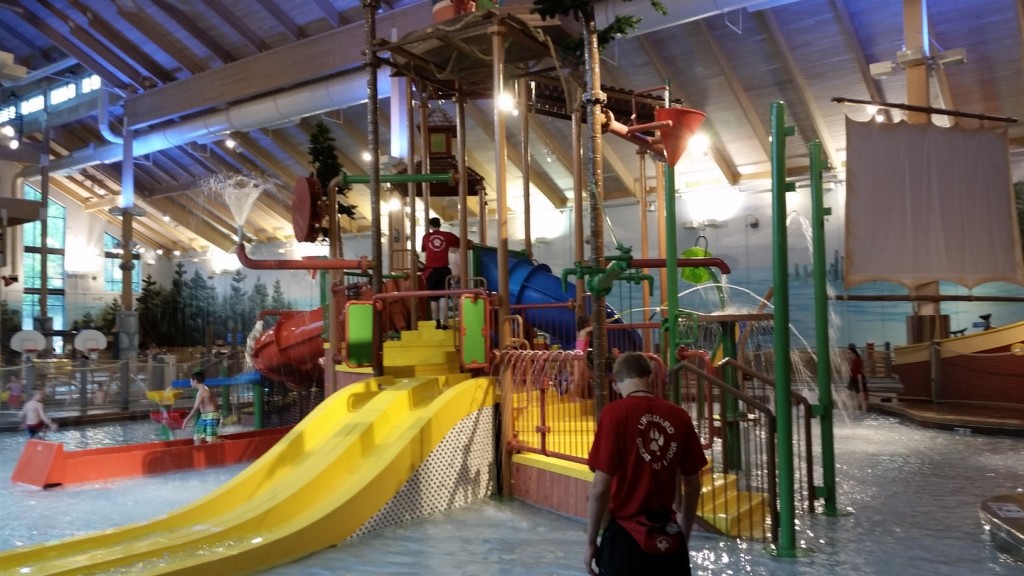 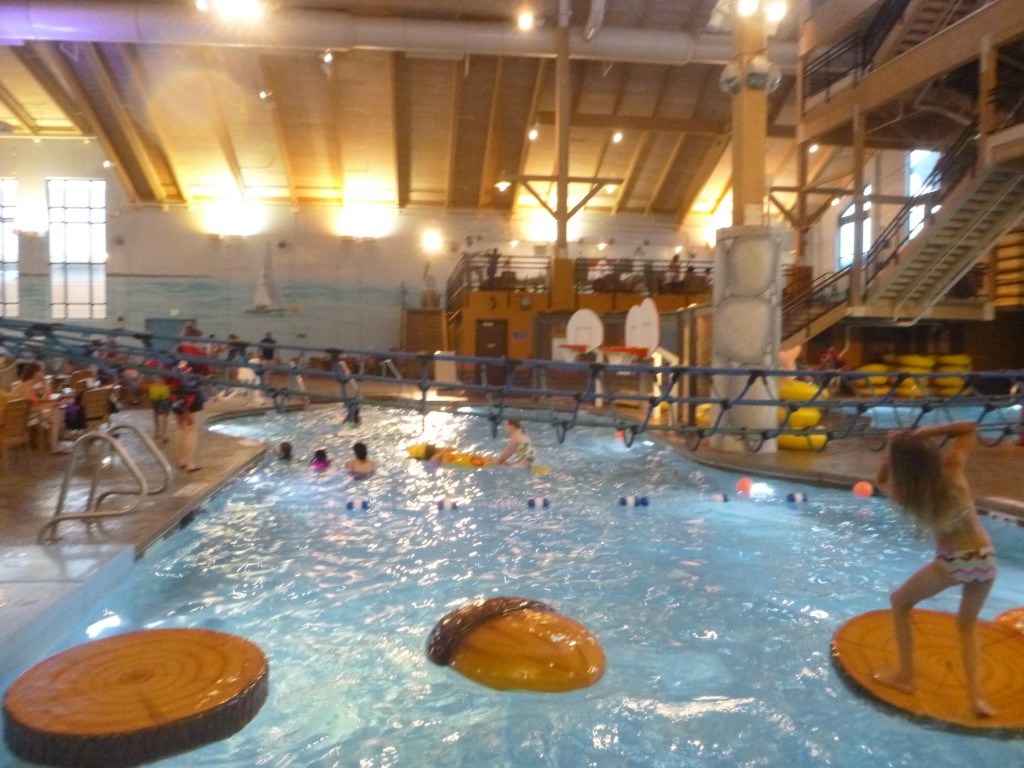 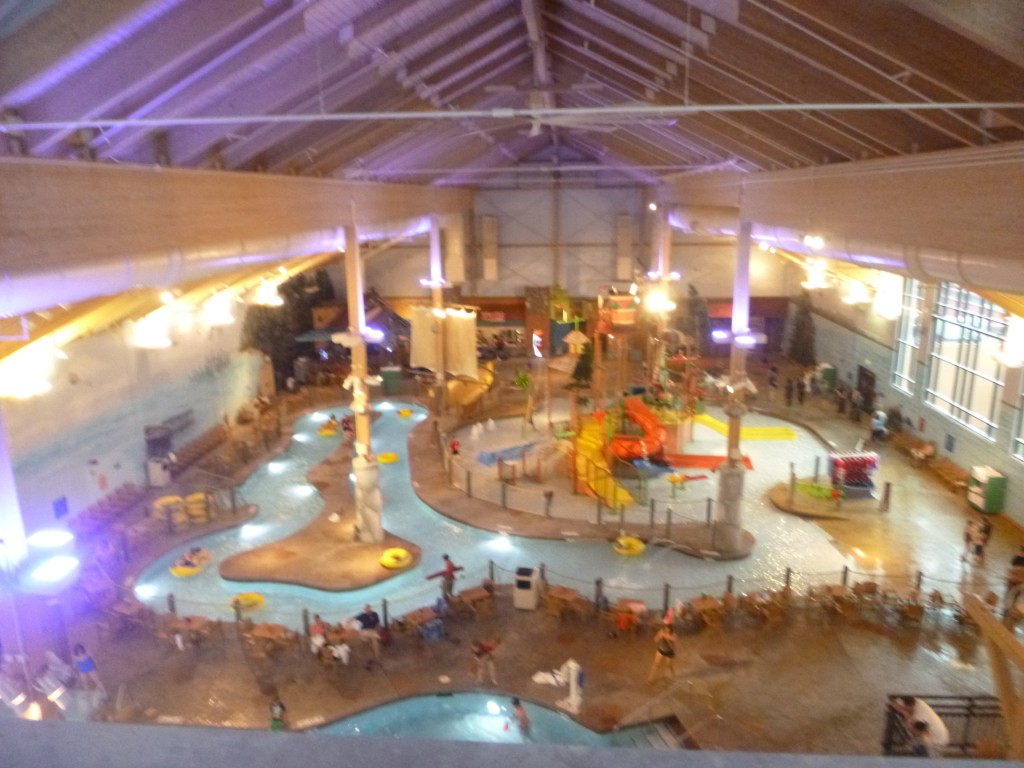 This side also has three more slides that go outside. Two of them you ride with tubes and the other is a body slide. All three of them were very enjoyable. This is what they look like from the parking lot: 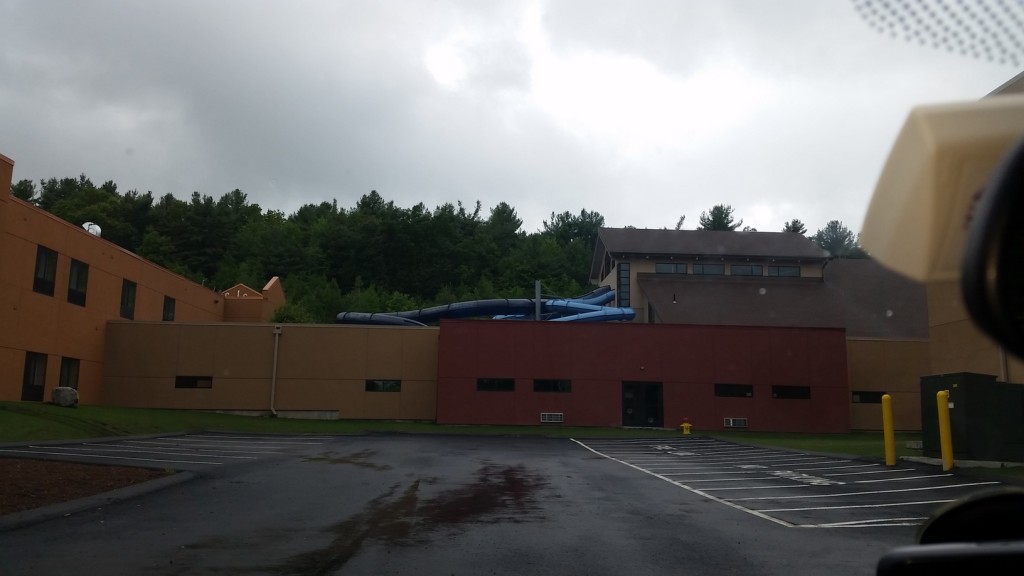 In this area there is plenty of seating and two restaurants; one looked to have drinks for adults and the other was called “Buckets.” I didn’t check out the menu or prices so I’m not sure what they offered.

We jumped between the two water park areas for over three hours. We were wrinkly, wet, and tired so we decided to go take up the offer on the free pizza and arcade games! Once we were done and used up all of the free tokens given to use at the beginning of the day, we decided to call it quits. At this point it was 4 PM! The day really flew by fast. We stopped at the gift shop and picked up a couple of items. Here’s a look at some of the gift shop offerings: 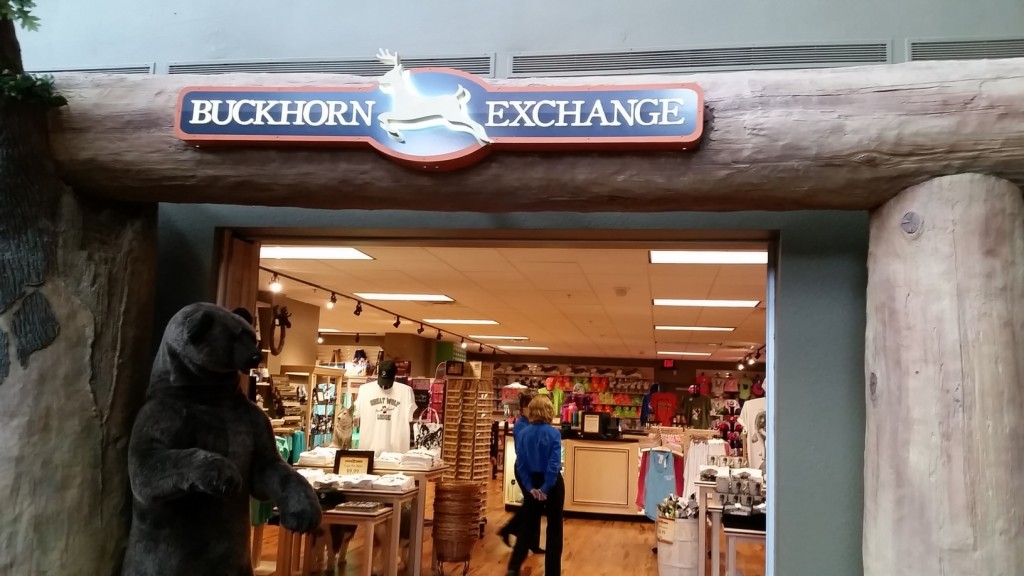 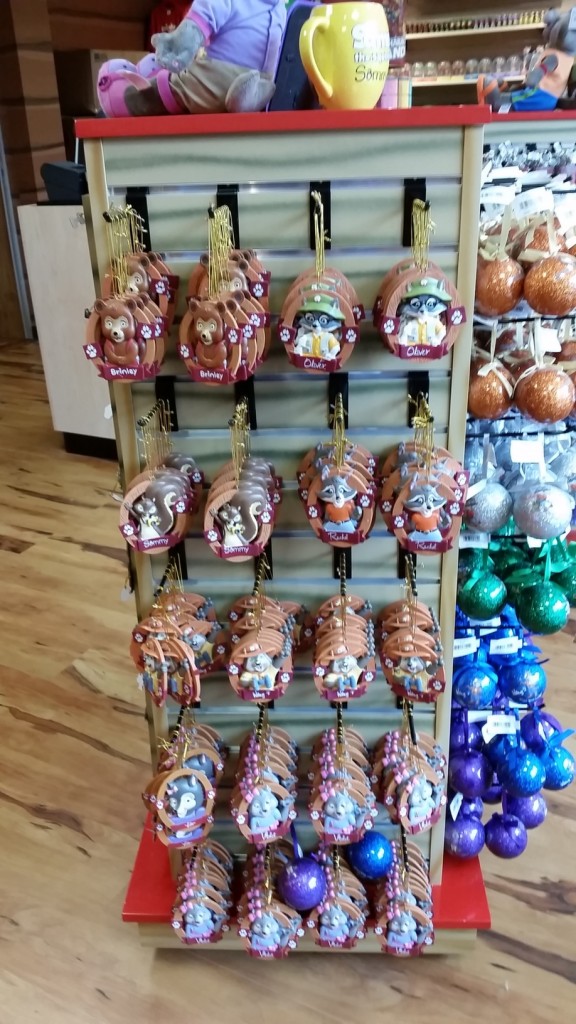 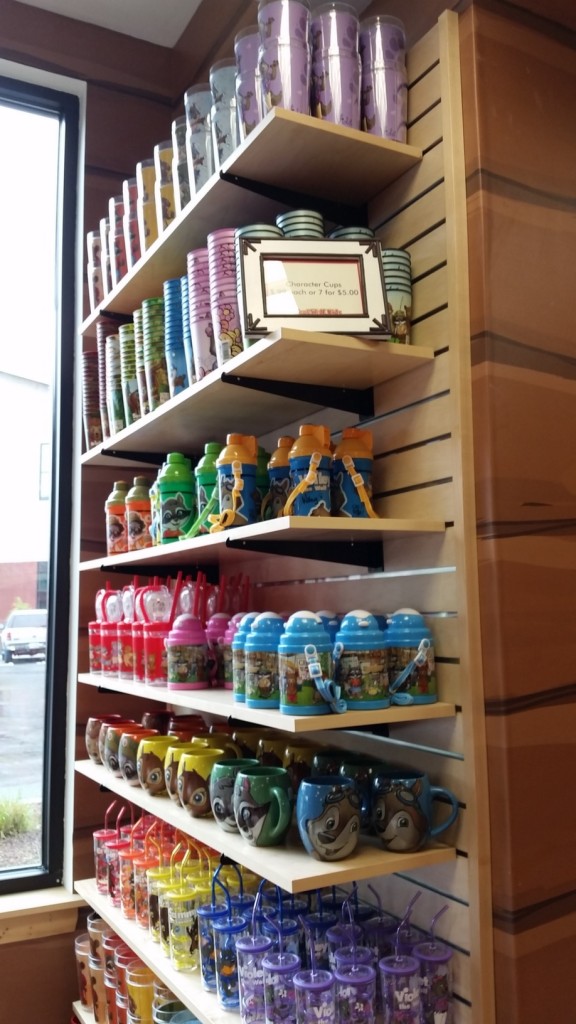 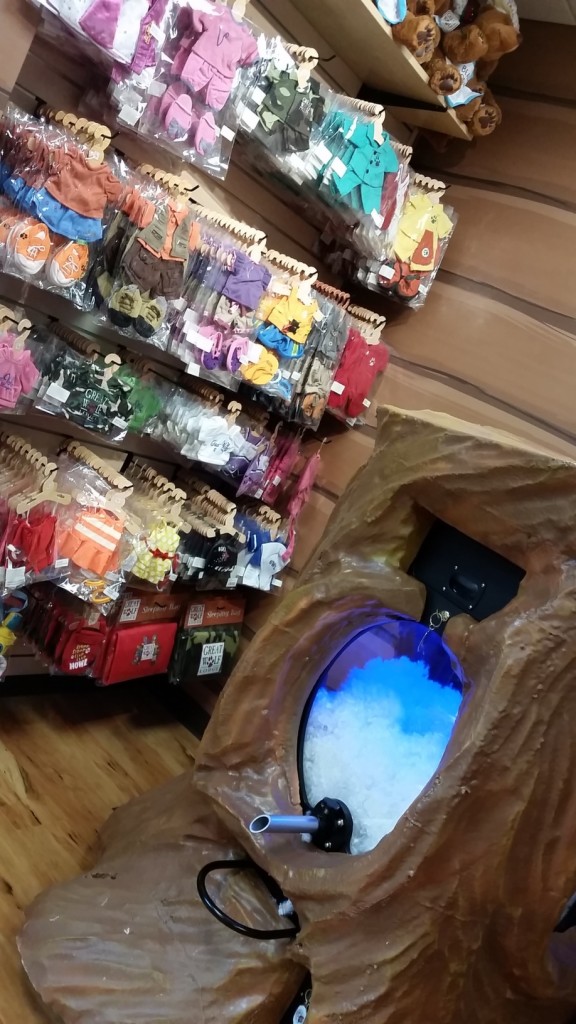 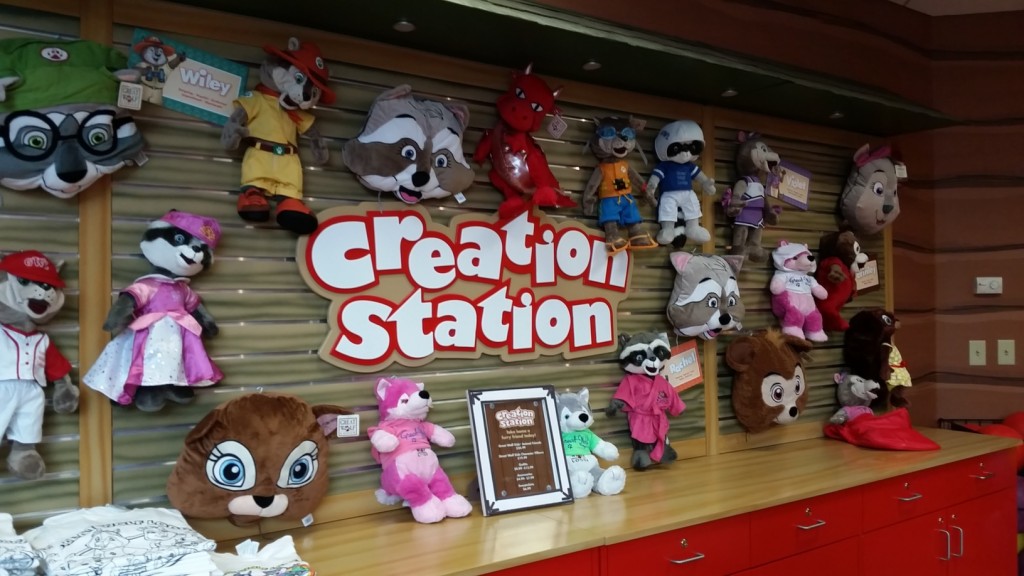 Right as we were leaving we left we watched a little animatronic show that plays every now and then in the main lobby. Once the show was over we left. 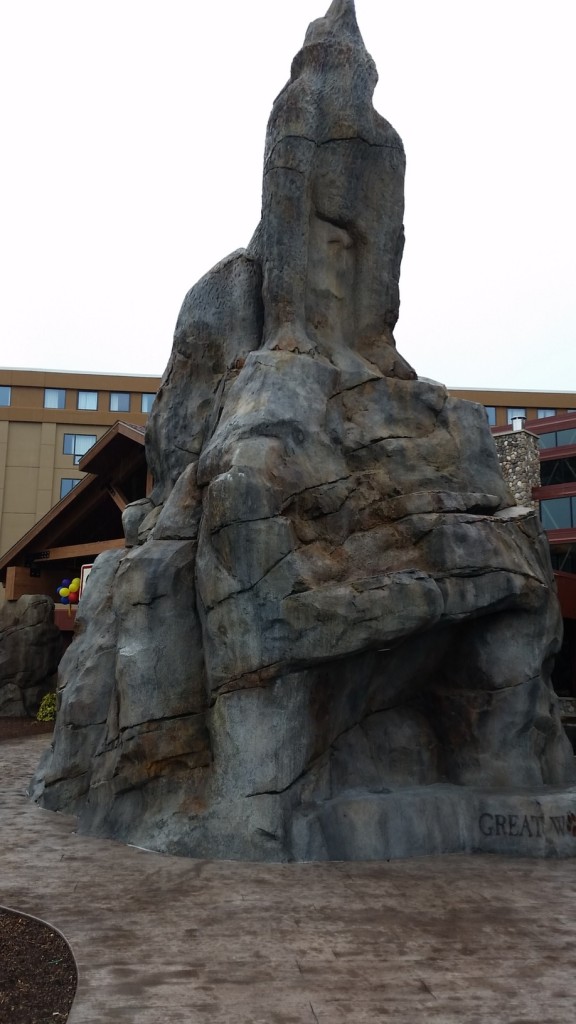 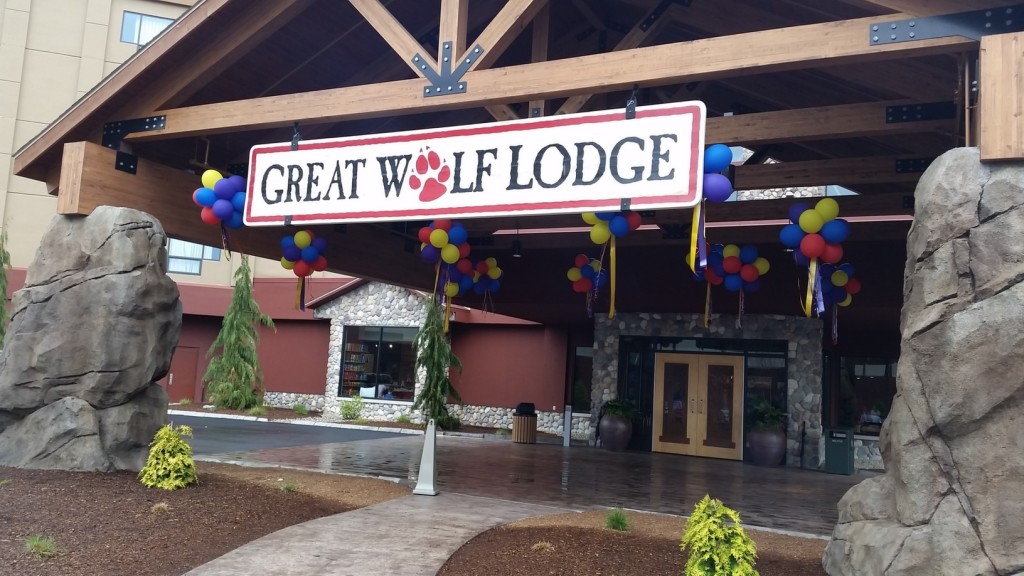 Great Wolf Lodge New England is a beautiful place and the theming is pretty amazing. Since we were only there for the day there simply wasn’t enough time to check out the other offerings in the place. Because this was a special media event we were allowed to be there for just the day. If you want to enjoy the Great Wolf Lodge you need to stay overnight – and trust me, it’ll be worth it. In addition to the indoor water park there is a massive ropes course called Howler’s Peak. In the same area as Howler’s Peak is Howlin’ Timbers Play Park. Howlin’ Timbers Play Park includes some kiddie rides, Howl at the Moon indoor mini golf which would be much more exciting with technology like a bushnell launch monitor, Ten Paw Alley (a mini four lane bowling alley), along with a whole bunch of other fun stuff. All of that is free with your stay. Here are some pictures of Howlin’ Timbers Play Park, courtesy of Great Wolf Lodge New England: 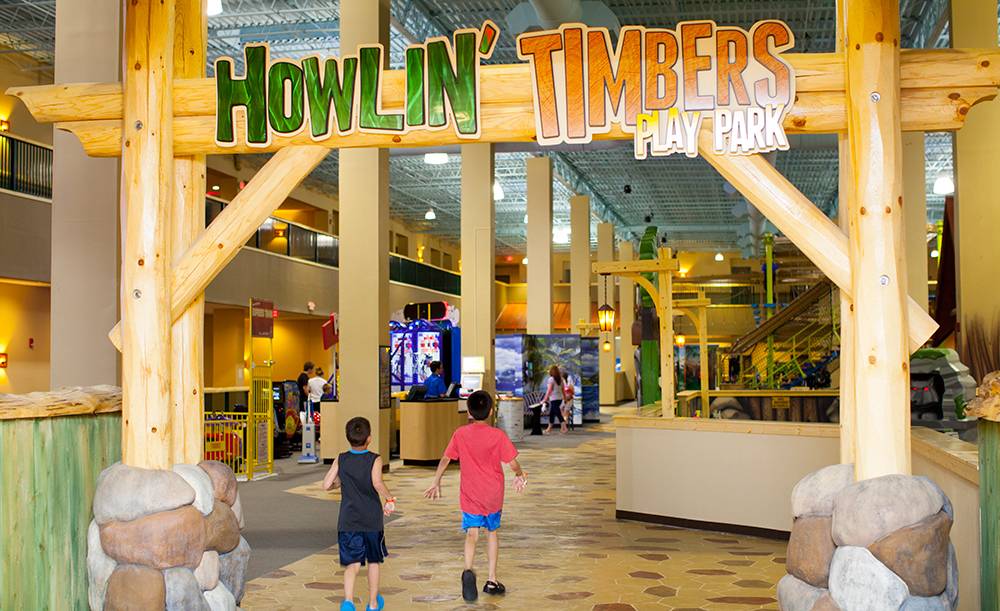 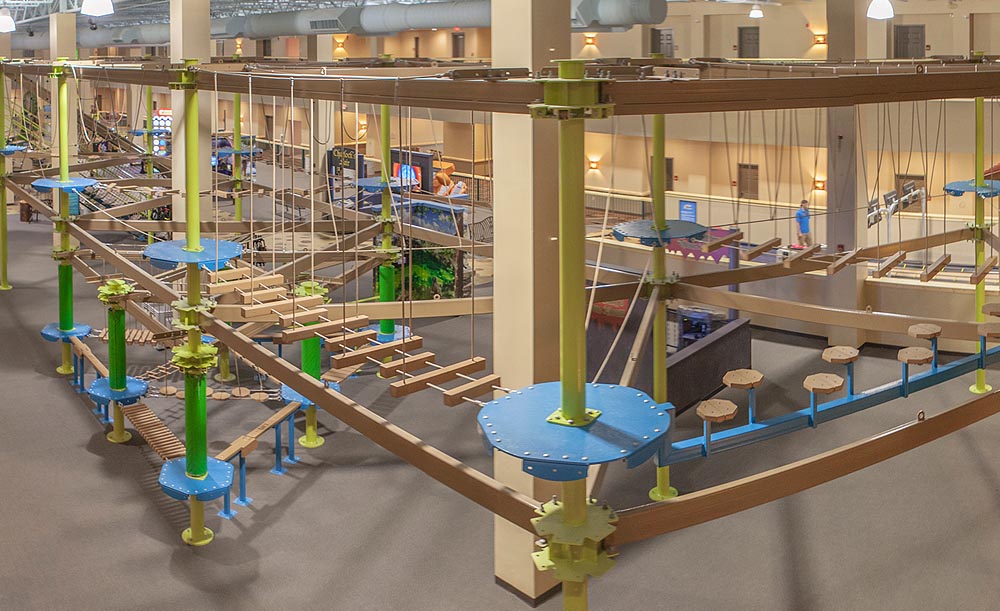 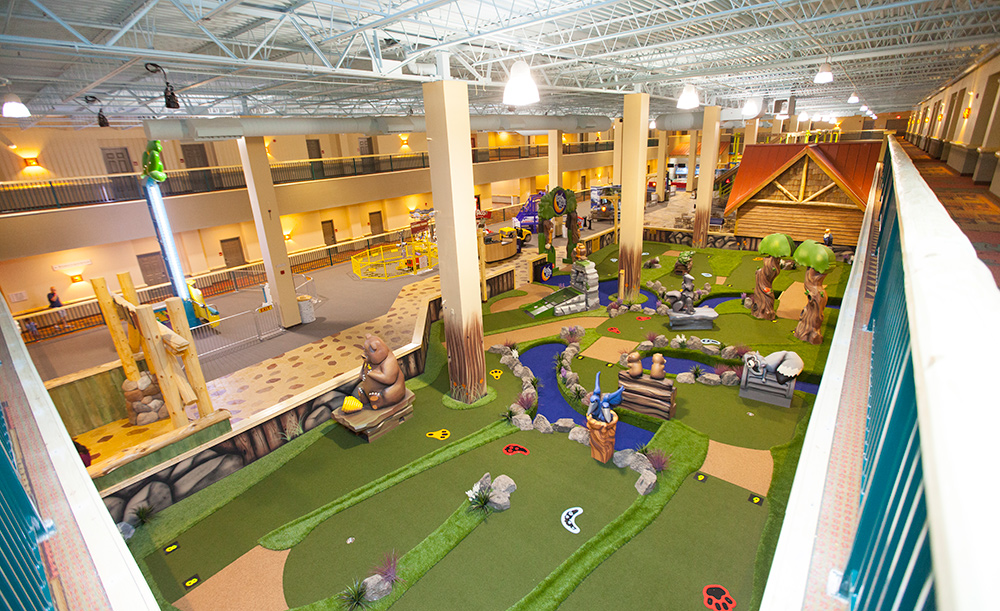 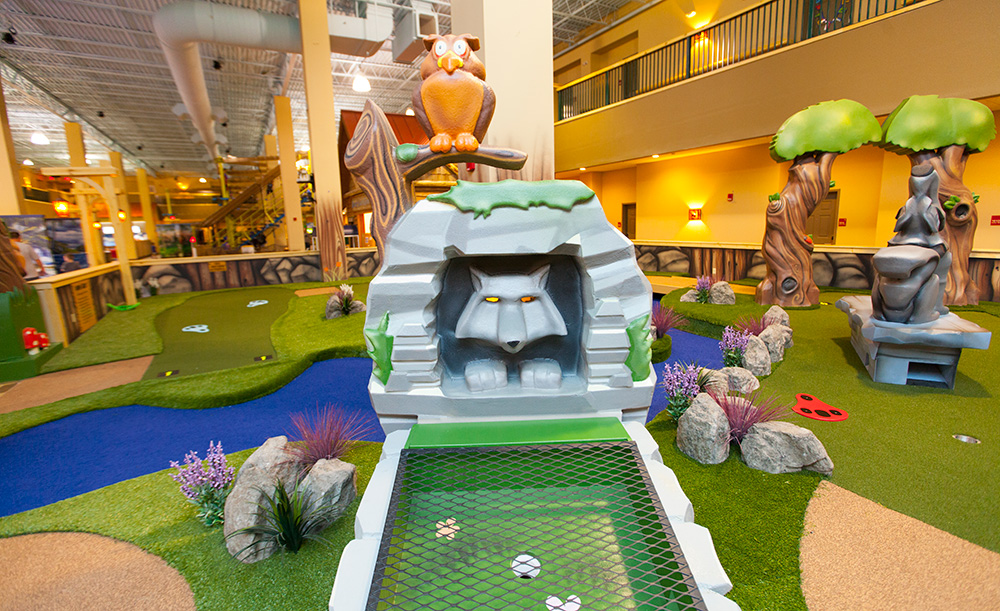 I want to thank Great Wolf Lodge New England for inviting us to come check out their new resort! My kids had a blast and are asking when we are going back! I highly suggest going to this place! You can have fun all day and when you bring your family, the kids will have fun for hours, maybe even days!